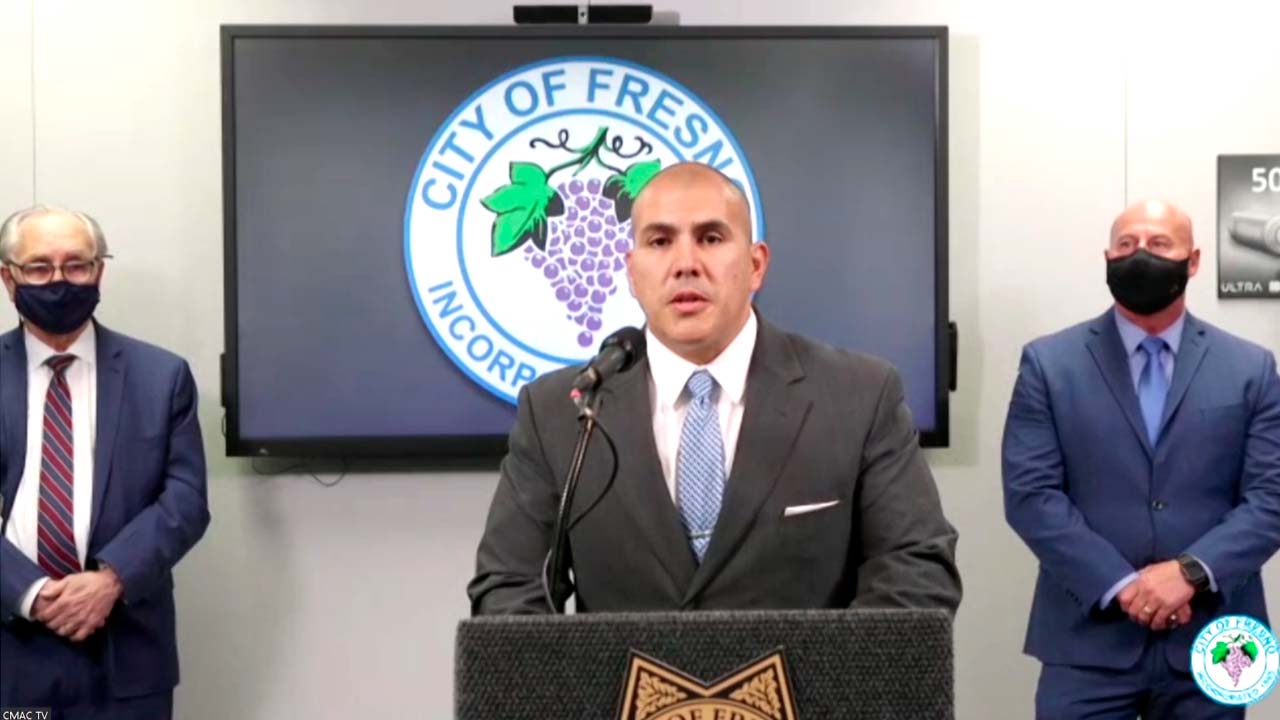 “My experience is that the higher you go, the smaller you feel; and you feel  this small because you feel the pressure of the responsibility and the people’s lives that are affected by your decisions. And that’s something that I take very, very seriously. But I look forward to taking on this new this new challenge and this new responsibility,” Balderrama said.

He added the community trust and community safety are his top priorities.

Balderrama was officially introduced by Mayor Lee Brand and Mayor-elect Jerry Dyer at a virtual news conference. He will be sworn in on Jan. 11.

Media and the public had to watch virtually because of COVID-19 precautions.

“I try to be the best person I can, the best professional that I can. And and if I happen to be a Latino, well, that’s good for the Latino community.” — Police Chief-select Paco Balderrama

Balderrama will also be the city’s first Latino police chief. He said he didn’t know that until recently, just assuming that with a large Latino presence in the city, it happened before.

“It is a great honor. It’s a great responsibility. My last name is not my last name. It’s one that I borrowed from my mom. My job is to is to keep that name untarnished and to give it honor so I can pass it on to my children,” Balderrama said.

“I compare that to also being Latino. I am who I am, but I also represent not just my family. I represent the Hispanic community. That’s something that I take very, very seriously. And it’s and it’s humbling to me. I just got to do the best job that I can every day and to do the right thing.”

He was also a trailblazer in Oklahoma City, becoming that department’s first Latino deputy chief.

“I try to be the best person I can, the best professional that I can. And and if I happen to be a Latino, well, that’s good for the Latino community,” Balderrama said.

Balderrama is fluent in Spanish, and answered questions in both languages.

Balderrama said he followed along with the Commission on Police Reform meetings and supports several of its recommendations.

Balderrama is open to having social services handling mental health and homeless calls.

“By doing that, we can lessen the load on the police department, but yet we can do accomplish a lot of good for the people that that call 911 and still need services,” he said.

He recognized 2020 has drastically changed policing.

“I don’t think police work as far as we have known it will ever be exactly the same as it used to be,” Balderrama said.

“You get what you see, and you see what you get. I think Paco will fit in great with the police department,” Hall said.

Hall’s last day will be Jan. 15, allowing for one week of transition.

In 1999, the Balderrama brothers joined the Oklahoma City Police Department.  Paco served as a captain and spokesperson for the department. He was promoted to major in 2017 and deputy chief in 2019.

The new chief will succeed Hall, who is scheduled to retire next April.