Survivors Remember Pearl Harbor at Home This Year Amid Virus 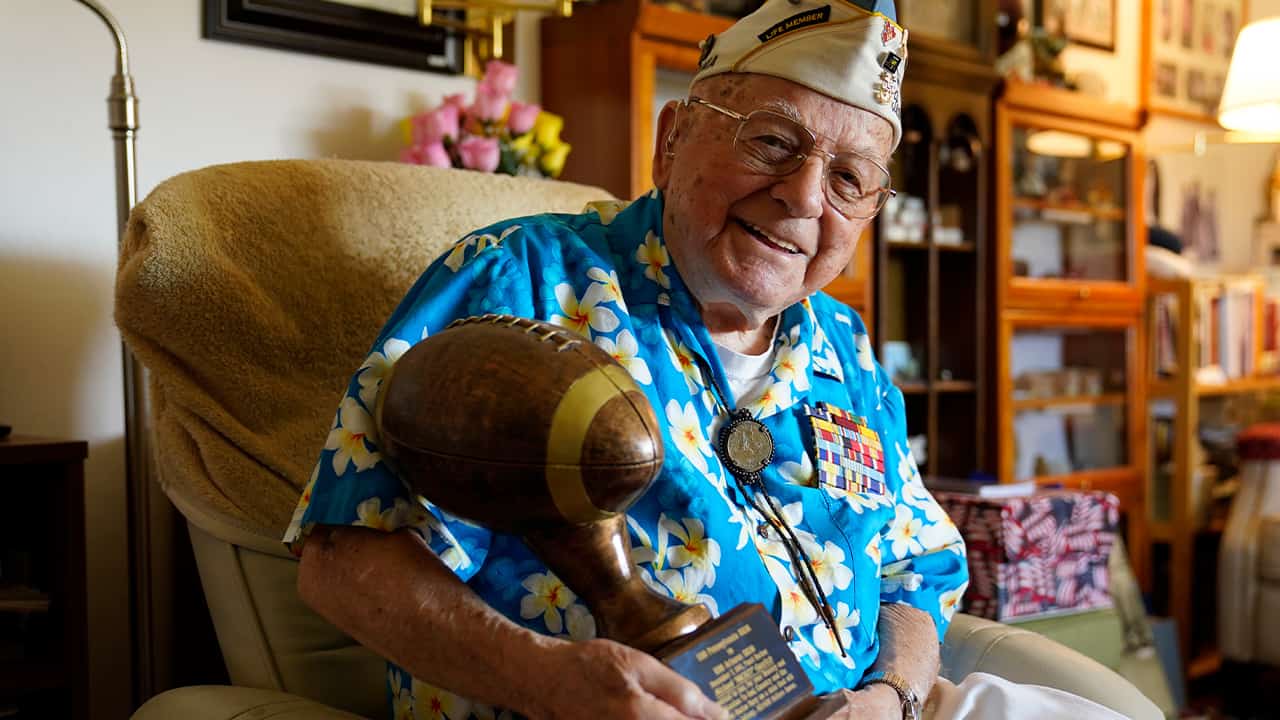 Navy sailor Mickey Ganitch was getting ready to play in a Pearl Harbor football game as the sun came up on Dec. 7, 1941. Instead, he spent the morning — still wearing his football padding and brown team shirt — scanning the sky as Japanese planes rained bombs on the U.S. Pacific Fleet.

Seventy-nine years later, the coronavirus pandemic is preventing Ganitch and other survivors from attending an annual ceremony remembering those killed in the attack that launched the United States into World War II. The 101-year-old Californian has attended most years since the mid-2000s but will have to observe the moment from from a distance this year because of the health risks.

“That’s the way it goes. You got to ride with the tide,” Ganitch said in a telephone interview from his home in San Leandro.

Nearly eight decades ago, Ganitch’s USS Pennsylvania football team was scheduled to face off against the USS Arizona team. As usual, they donned their uniforms aboard their ships because there was nowhere to change near the field. The pigskin showdown never happened.

The aerial assault began at 7:55 a.m., and Ganitch scrambled from the ship’s living compartment to his battle station about 70 feet above the main deck. His job was to serve as a lookout and report “anything that was suspicious.”

He saw a plane coming over the top of a nearby building. Sailors trained the ship’s guns on the aircraft and shot it down.

“I was up there where I could see it,” Ganitch said.

The Pennsylvania was in dry dock at the time, which protected it from the torpedoes that pummeled so many other vessels that day. It was one of the first to return fire on the attacking planes. Even so, the Pennsylvania lost 31 men. Ganitch said a 500-pound bomb missed him by just 45 feet.

He didn’t have time to think and did what he had to do.

“You realize that we’re in the war itself and that things had changed,” he said.

The USS Arizona suffered a much worse fate, losing 1,177 Marines and sailors as it quickly sank after being pierced by two bombs. More than 900 men remain entombed on the ship that rests on the seafloor in the harbor.

They’re why Ganitch likes returning to Pearl Harbor for the annual remembrance ceremony on Dec. 7.

“We’re respecting them by being there, and showing up and honoring them. Cause they’re really the heroes,” Ganitch said.

But the health risks to the aging survivors of the attack and other World War II veterans mean none of them will gather at Pearl Harbor this year.

The National Park Service and Navy, which jointly host the event, also have closed the ceremony to the public to limit its size. The gathering, featuring a moment of silence, a flyover in missing man formation and a speech by the commander of the U.S. Pacific Fleet, will be livestreamed on Monday instead.

Ganitch served the remainder of the war on the Pennsylvania, helping in the U.S. recapture of the Alaskan islands of Attu and Kiska. The battleship also bombarded Japanese positions to help with the amphibious assaults of Pacific islands like Kwajalein, Saipan and Guam.

Ganitch remained in the Navy for more than 20 years. Afterward, he briefly worked in a bowling alley before becoming the shop foreman at a fishnet manufacturing plant.

Ganitch still shows glimpses of his days as a running guard protecting his quarterback: He recently crouched down to demonstrate his football stance for visiting journalists.

Kathleen Farley, California chairwoman of the Sons and Daughters of Pearl Harbor Survivors, said many survivors are already talking about going to Hawaii next year for the 80th anniversary if it’s safe by then.

Farley, whose late father served on the USS California and spent three days after the attack picking up bodies, has been attending for two decades.

“I know deep down in my heart that one of these days, we’re not going to have any survivors left,” she said. “I honor them while I still have them and I can thank them in person.”

Related Topics:NavyPearl Harbor
Up Next