What may be the cutest-ever photo of a possum — or maybe the ONLY cute photo of America’s sole member of the marsupial family — is headlined on a post on the Clovis Animal Services Facebook page with the following message:

“Opossums make (may) look scary, but they are actually helpful to have around! Please let us know if you see one that is injured, otherwise, they can be left alone. Call us with any questions. ClovisAnimalServices.com — (559) 324-2450.”

Possums can be more active during warmer daytime hours during the winter, experts say, which could result in more human encounters with the normally nocturnal critters. 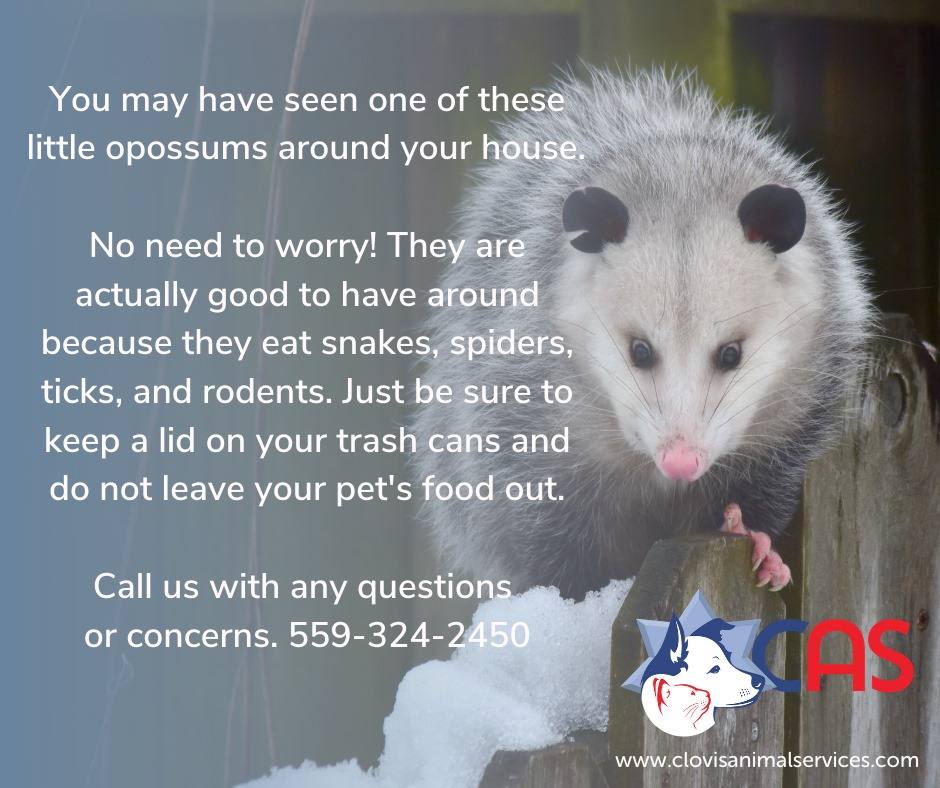 One commenter noted in response to the Animal Services Facebook post that the feces of infected possums can be fatal to horses, which Harlan said is true.

The possum message is directed more toward urban residents who don’t have livestock but might be somewhat alarmed to see one of the furry critters waddling through their backyard or balancing along the top of a fence.

Put Away The Cat Food

Possums are useful, Harlan said, because they nosh on rodents, snails, spiders, and other bugs. (Would we like them better if they ate their weight in mosquitoes?)

They also hanker after the food that cat owners leave outside for their kitties, which is “like giving them a free buffet,” Harlan said.

So if you don’t want possums in your yard, put the lid on all food containers and start feeding the cats and other pets indoors, she said.

As for their appearance: Harlan agrees that possums at first glance do appear somewhat ratlike. But they should also be recognized as America’s only representative of a clan that includes kangaroos, koalas, and Tasmanian devils.

Possum are not aggressive, says the Humane Society of the Unites States on its website. “Their open-mouth, defensive hissing is merely a bluff to look vicious. And if that doesn’t work they play dead when really scared,” the organization says.

Ugly or cute, the best way to deal with possums is to leave them alone, and they will leave you alone, Harlan said.