California’s status has shifted dramatically with the election of Joe Biden as the next president. The reasons are both political — deep blue California will have more inroads to a White House controlled by Democrats — and personal: For just the second time in American history, a Californian will serve as vice president.

Kamala Harris — California’s junior senator and former state attorney general — made history this week when American voters chose Biden to replace Republican President Donald Trump. She’ll become the first vice president who is a woman, a woman of color and a California Democrat.

It’s a significant boost for a state that in recent years has held a high profile in Congress, but little sway at the White House. Congressional leaders from both parties, Democratic House Speaker Nancy Pelosi and GOP Minority Leader Kevin McCarthy, hail from the Golden State. But the last Californian president was Ronald Reagan more than 30 years ago. And the last Californian vice president was Richard Nixon — 60 years ago.

California has changed radically since then. Once the home of a thriving conservative movement that propelled Republicans Nixon and Reagan to national prominence, it’s now a state where Democrats hold all the political power and a diverse electorate elevated Harris — the child of immigrants from India and Jamaica — to the United States Senate. She emphasized her California roots when she launched her short-lived campaign for the Democratic presidential nomination last year, calling herself a “proud daughter of Oakland” as she stood before its city hall, not far from the hospital where she was born.

Her deep ties to California include a friendship with Gov. Gavin Newsom that goes back decades. She was sworn in as San Francisco district attorney on the same day in 2004 that he became the city’s mayor. They rose through the ranks of California politics sharing a circle of wealthy benefactors and political consultants. They’ve even vacationed together.

After the last four years of California’s tumultuous relationship with the Trump administration — the state sued it more than 100 times while Trump frequently threatened to yank federal funding — the friendship between Newsom and Harris positions California for a vastly different dynamic.

“With Kamala Harris as vice president, we won’t have to feel like we’re walking on landmines all the time, because we know she’s not looking for ways to harm California,” said Daniel Zingale, Newsom’s strategy and communications director until retiring early this year.

“Quite the opposite — she is going to take the interests of our nearly 40 million people to heart.”

Harris could become an influential vice president in part because the office itself is more powerful than in earlier periods of American history, said Joel K. Goldstein, a Saint Louis University law school professor and scholar of the vice presidency.

Beginning with Jimmy Carter’s inclusion of Vice President Walter Mondale in the 1970s, he said, presidents started giving their VPs an office in the West Wing, an open invitation to attend meetings and lots of access to confer privately with the president. That was how Biden experienced being Barack Obama’s second-in-command, Goldstein said, and the way he expects Biden to treat Harris.

When Biden announced picking Harris as his running mate, he envisioned her holding a significant role, saying he wanted Harris “to be the last one in the room” as he weighed big decisions.

“The fact that she’s going to be in the room — in a lot of rooms — and that some of what she cares about are things that are important in California, that means that California will have influence,” Goldstein said.

“There’s likely to be responsiveness to problems that California has in a way that give it some benefit.”

Here are three ways Harris could make a difference:

California Could Attract More Attention From the Federal Government

Behind the scenes, President Trump has issued disaster declarations to help California recover from brutal fire seasons. But in front of the cameras, he has ridiculed the state while it suffered, scolding California for neglecting forests and dismissing concerns about climate change.

Recent wildfires, along with the coronavirus pandemic, have shown how much California relies on the federal government, said state Senate leader Toni Atkins, a San Diego Democrat. 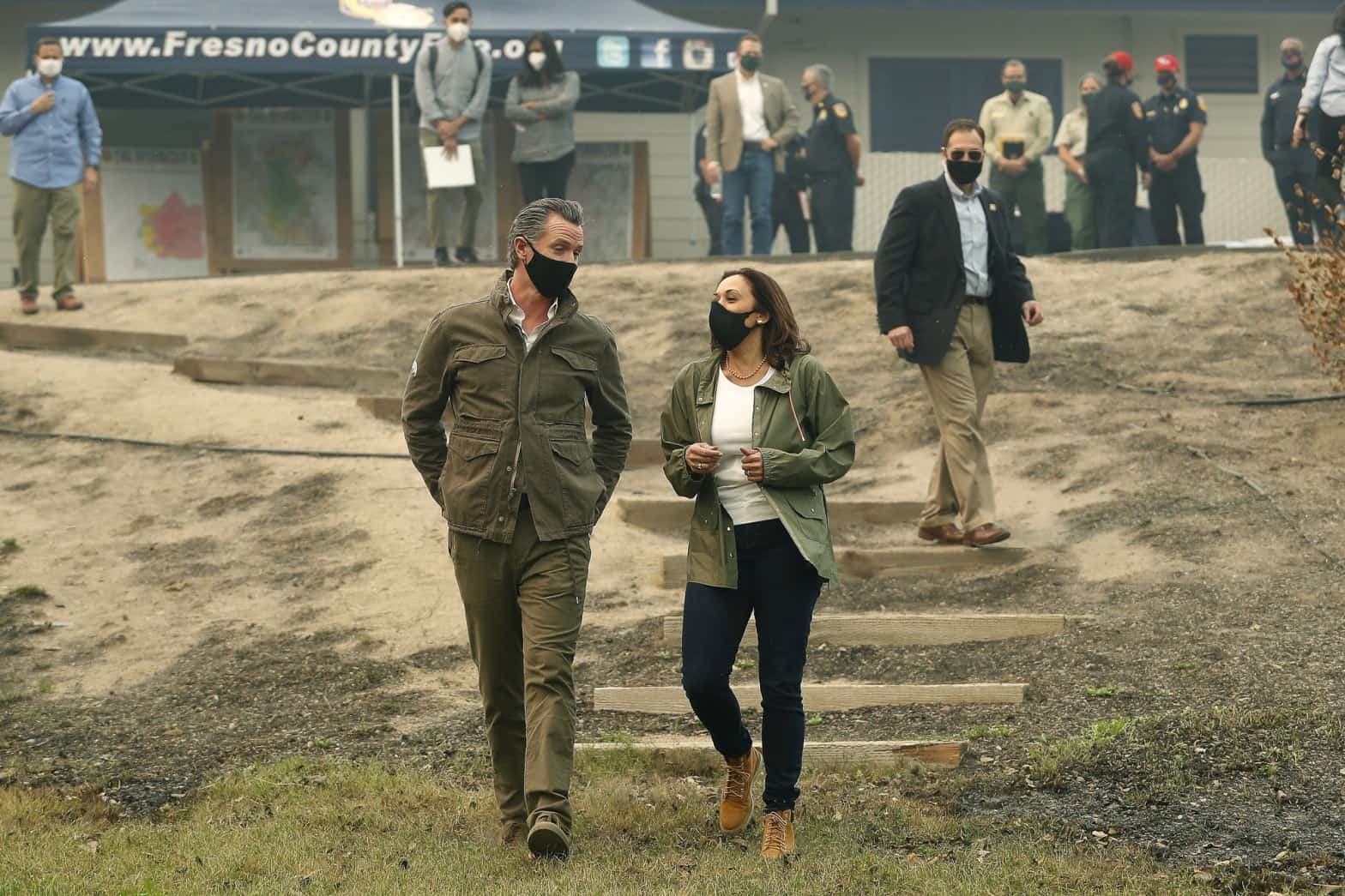 In Indiana, a close relationship between the governor and Vice President Mike Pence, himself a former governor of Indiana, has helped the state navigate the coronavirus pandemic, the Indianapolis Star reported this spring. GOP Gov. Eric Holcomb described contacting Pence when the state needed more test kits and federal funding to staff testing sites.

Delaware had a similar inside track during Biden’s vice presidency. Delaware Democratic House Speaker Peter Schwarzkopf told CalMatters he recalled Biden paying a visit to his home state in 2009.

“I said, ‘I see they just put you in charge of the stimulus program. I have a project that’s shovel-ready,’” Schwarzkopf recalled telling the new vice president.

The boardwalk at a popular tourist beach had been damaged in a storm, and the state needed $7 million to repair it. Two days later, Schwarzkopf said, he was told Delaware would get the money.

“If we needed anything or we had a situation, we didn’t have to explain it to Joe. He just understood,” Schwarzkopf said.

“We had access to him and that’s how it will be with Kamala too. You won’t have to explain things to her, she’ll know what you need… Your state will now have a front row seat to the administration.”

That will likely ameliorate the common feeling in California that the federal government and national media are disproportionately focused on the East Coast.

“California is often under-appreciated, because we’re 3,000 miles away and the folks on the East are up for three hours before we get going,” Democratic former Gov. Jerry Brown said in an interview with CalMatters. “We’re often left behind. So having a vice president will be good for the state.”

Curb greenhouse gas emissions. Raise the minimum wage to $15 an hour. Give workers paid family leave. Those are policies Biden and Harris say they want to see across the nation — and that California has already approved.

“California in many ways is a laboratory for policy change. That is a huge asset that a vice president from California will bring to the nation,” said Karen Skelton, a Democratic strategist who was Al Gore’s political director when he was vice president.

“Kamala will be given assignments and will find her sweet spots in the important administration priorities. I wouldn’t be surprised if some of that is influenced by the profoundly complicated policy work that has come out of California,” she said.

“The west will lead the east in terms of the incubation of ideas.”

“The United States of San Francisco is what both Joe Biden and Kamala Harris sold to the nation,” state Sen. Shannon Grove, leader of the Senate’s GOP caucus, said by email.

“California’s liberal experiment has created the largest homelessness in the nation, highest gas taxes, widening income inequality, near bottom rates in K-12 reading and math scores, eliminating parental choice for education, and a criminal justice system where the human trafficking of a child is not considered a violent crime. Enough is enough.”

The last time a Democrat was in the White House, California’s plan to cut greenhouse gases and smog-forming pollution from cars became a model for a national standard. Obama hosted California legislator Fran Pavely at the White House as he announced new nationwide rules mirroring those she wrote into state law.

Trump has had the opposite effect on California’s effort to combat climate change. He’s yanked California’s authority to set its own standards and rolled back federal fuel economy rules,  setting off a legal battle that may sputter when Democrats are back in the White House.

More Californians Could Wind up Running the Federal Government

Vice presidents historically have brought people from their home states to Washington to help them run their own offices and other government agencies, said Goldstein, the vice presidential  scholar.

Pence has been especially influential in shaping the Department of Health and Human Services, a reflection of his longtime interest in cutting funding for Planned Parenthood, Politico reported last year. The article cited numerous high-level department officials with ties to Pence and Indiana, including cabinet secretary Alex Azar, who was an executive at an Indiana-based drug company when Pence was governor; Surgeon General Jerome Adams, who was an Indiana public health official; Medicaid leader Seema Verma, who advised Pence on health policy when he was governor; and Verma’s deputy chief of staff, who was Pence’s legislative director when he was governor.

“She’s got a pretty big rolodex,” said Brian Brokaw, a Democratic strategist who managed Harris’ campaigns for attorney general. “I’m sure she would want to have many of her longtime trusted staff and others join the administration.”

John Peschong, a GOP supervisor in San Luis Obispo County, worked in the White House under President Reagan. He recalled numerous Californians Reagan brought with him to Washington.

“The influence from the state comes with the people brought on board to run the various federal government departments,” Peschong said. “There’s a lot of folks (Harris) would probably try to move into the administration that are not public names right now.”

Editor’s note: This story was updated to describe Harris as the first woman of color elected vice president. Vice President Charles Curtis, who served in the Hoover administration in the 1930s, was part Native American.