In the waning days of the 2020 election, the two local school board candidates are sparring over accusations about a clean campaign pledge.

Administered by the Secretary of State and filed with the Fresno County Clerk’s office, incumbent Eric Payne and challengers Nasreen Johnson and Sevag Tateosian agreed to seven principles including an open and honest discussion of the issues, not to demean an opponent’s character, and condemning others who make such an attack.

Payne, running for his third term, is alleging in a Facebook post that Tateosian violated the pledge.

Candidates may voluntarily sign a fair campaign practices pledge when they file to run, according to election code.

On his Facebook page, Tateosian posted an image comparing himself to Johnson. It shows a complimentary photo of Tateosian next to a unflattering picture of Johnson.

“November 3rd is around the corner. My interest? Higher completion rates, stronger vocational/technical training, upgraded first responder program and financial education back into the classroom! Surprisingly, not everyone agrees…” the post says.

Payne said this violated the second plank of the code:

“I SHALL NOT USE OR PERMIT the use of character defamation, whispering campaigns, libel, slander, or scurrilous attacks on any candidate or his or her personal or family life.”

“While I work on plans to strengthen our First Responders Academy and improve our colleges, I hope Eric enjoys his final weeks in office as I know he has quite a hefty amount of debts to repay to the FPPC,” Tateosian said in via text message.

Related Story: Is This Campaign Ad Racist? Or Does It Just Call a Candidate Corrupt? 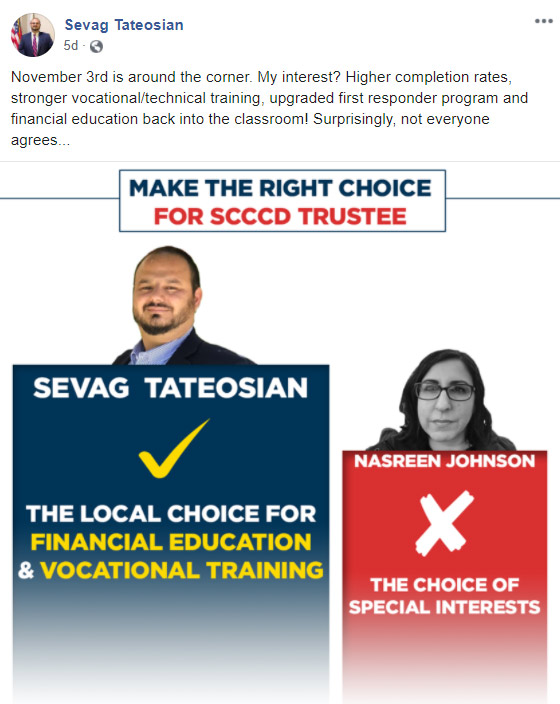 “It’s disgusting that while you signed the disclosure that you would run a clean campaign free of attacks, you have continued to tell lies and now you have resorted to this attack ad, as the only woman in this race, the verbal abuse and demeaning images are not warranted against Nasreen Johnson — How would you like it if someone treated your wife, mother, or sister this way …. You wouldn’t, I’m sure. If anything your the Bully in this race,” Payne wrote.

Tateosian responded with a message about a Payne controversy.

The Fair Political Practices Commission, the state agency in charge of campaign finance, fined Payne $54,000 for several violations. He has yet to pay his fine.

“Keep my name and hers out your mouth,” Payne replied. 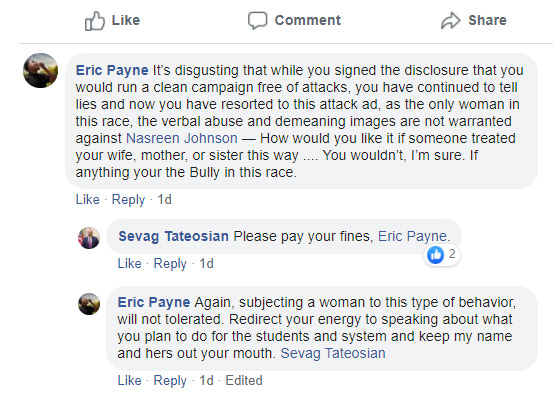 Read the Pledge Signed By the Candidates