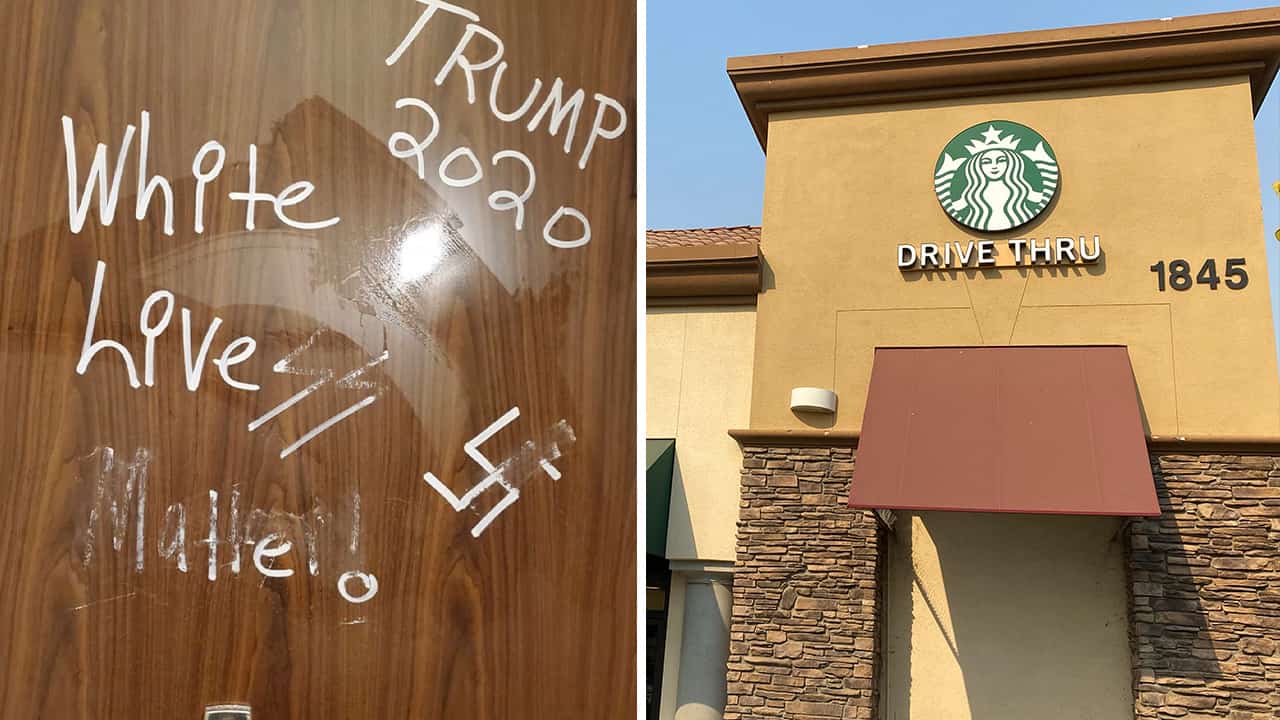 Shayna Boyles knew she had to take action after learning that someone vandalized a Clovis Starbucks with racist graffiti.

“I was specifically triggered by what I saw,” Boyles said. “I wanted to show that is not tolerable here. And I also know that there is a growing movement of people, especially younger people, that are really not going to accept any kind of racism like that, any acts of hatred like that.”

According to Clovis police, someone used a white-out pen in the bathroom at the Starbucks on Herndon and Fowler avenues Saturday night around 10:30 p.m.

The message, shown in a picture that Boyles posted on social media: “White Lives Matter!” along with an image of a swastika and the Nazi-era “SS” symbol. The message also included “Trump 2020.”

Boyles and three others gathered at the street corner at Fowler and Herndon in Clovis to protest the message found. Protest at the Street Corner

Several cars honked in support at Boyles and her friends.

This is the second known incident of racist vandalism in as many months in Clovis. Last month, vandals broke into black-owned Just My Essentials, destroying merchandise and leaving racist messages. No arrests have been made.

Today, while Boyles’ group may have been small, they hoped their message carried strong.

“I see some serious racism in Clovis. And it’s disappointing because I’m somebody who grew up here and I know that there’s this reputation of the Clovis way of life and Clovis being overall a very safe place for people to live in. It can be. But not necessarily if you’re a person of color. If you’re a Black person, it’s not always safe for us. It’s not always comfortable for us here,” Boyles, 24 and Black, said.

Boyles works at a different Starbucks along with Morgan Hunt. Both said the coffee chain did the right thing by immediately cleaning up the racist messages.

“I want all of my fellow partners to feel safe and to feel included at work and not have to fear any type of hatred or racist attacks. So this doesn’t fall on Starbucks. It’s more so about getting the community to understand that we will not tolerate hate,” Hunt said.

Hunt says she’s felt the sting of racism, including at work.

“I cannot tell you the amount of times that people have made racist comments,” Hunt said.

As an example, she said “there was so much backlash” to Black Lives Matter shirts Starbucks created.

Not everyone felt the need to protest.

A woman at the Starbucks who did not want to give her name but said she is a regular, wondered if someone left those message to “stir things up.”

“Freedom of speech works both ways,” she said.

This graffiti was found inside the restroom of Starbucks at Herndon and Fowler. I’m a black woman from Clovis, and I’m not going to let racists think they have a community here. pic.twitter.com/ZNAtBOddJc

Starbucks said they immediately cleaned off the graffiti upon discovery.

“When we were notified of the vandalism, our partners (employees) took immediate action to remove the graffiti. Hatred and discrimination of any kind are not welcome in our stores, and we join the Clovis community in condemning this reprehensible act of vandalism,” Starbucks spokesman Jory Mendes told GV Wire℠ over the phone.

Clovis police did not know about the incident until Boyles’ posted it on Twitter on Tuesday.

A police detective spoke with Starbucks and are awaiting any possible surveillance footage.

“We are following up with the store, Starbucks corporate, and any possible witnesses because even though this specific incident wouldn’t result in criminal charges, this is not something we tolerate in Clovis,” police spokesman Ty Wood said.

Even if the message was supposed to be a joke, Boyles didn’t find it very funny.

“I want people to know that’s not something to joke about, throwing swastikas around or saying white lives matter, stuff like that. It’s not a joke. It’s people’s reality, not just here, all around the world,” Boyles said.

Related Topics:Black Lives MatterStarbucks
Up Next