Both districts learned Wednesday afternoon that their waiver applications have been approved.

The decision on how soon Clovis Unified elementary schools will reopen to in-person classes is expected next week.

Fresno Unified plans to continue bringing only small groups of high-need students such as the homeless and English learners on campus for the remainder of the semester, district spokeswoman Amy Idsvoog said Thursday.

Those students are still engaged in distance learning but need to be on campus for internet connection and meals. They returned to campuses earlier this week.

“With the required safety practices, including physical distancing, we’re continuing to work with our labor partners to identify a path forward— providing the opportunity for all students and staff to return to campus,” Idsvoog said.

Under the state’s reopening plan, elementary schools in counties with higher rates of coronavirus infection like Fresno could seek a waiver to the school closure mandate. That allowed counties that were still in Tier 1, color-coded purple, to reopen schools to younger students.

Fresno County learned this week that it has remained in Tier 2, color-coded red, for two weeks straight, which under the state reopening plan will allow districts to reopen secondary schools.

Clovis Wants to Hear from Parents

The district is in the process now of surveying parents about their preference for in-person or online instruction for their students.

Clovis Unified has proposed a hybrid schedule that would bring half of the students to school in the mornings and the other half in the afternoons, so students may be safely distanced in classrooms and on campus during the school day. They would continue to do distance learning the other half of  the day and also on Wednesdays.

“This is an important step forward in our journey to return students to Clovis Unified classrooms and the high quality educational environment they deserve,” said Board President Chris Casado. “I’m extremely proud of every member of the district’s educational team, all of whom have devoted themselves to taking care of our students, and overcoming the hurdles caused by this pandemic.”

In Central Unified School District, the board voted unanimously Tuesday to postpone returning elementary students to school until January at the earliest.

Although the district has not yet submitted its waiver application, “we have the waiver prepared and will be meeting with our parent advisory group at their regularly scheduled meeting” at the end of October, spokeswoman Sonja Dosti said. 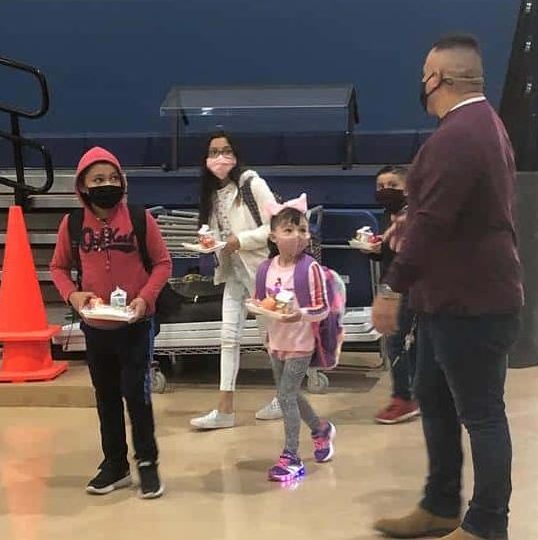 Meanwhile, Kings Canyon Unified School District, which is headquartered in Reedley, opened its doors Thursday morning to in-person instruction for students in grades transitional kindergarten through 6. The district received its waiver earlier this month.

Students in TK through second grade are attending school daily, while those in third through sixth grade attend on Mondays and Thursdays and some Wednesdays, or Tuesdays and Fridays and the remaining Wednesdays, communications officer Renee Delport said.

To make sure students could be properly distanced, school officials repurposed resource rooms and other spaces to become classrooms and also hired additional teachers, she said.

Kings Canyon also had to obtain new furniture, which was arriving at TL Reed Elementary on Thursday morning, Delport said.

The district is still working out plans for bringing middle and high school students back to their schools, she said. Because older students move between classrooms, “there’s quite a bit more to consider” in terms of devising a reopening plan that focuses on safety for students and staff, Delport said.

About one-sixth of the district’s 6,000 elementary students are opting to remain with distance learning, and the rest are coming back to campus for in-person instruction, she said. Kings Canyon Unified’s total enrollment is about 10,000 students.