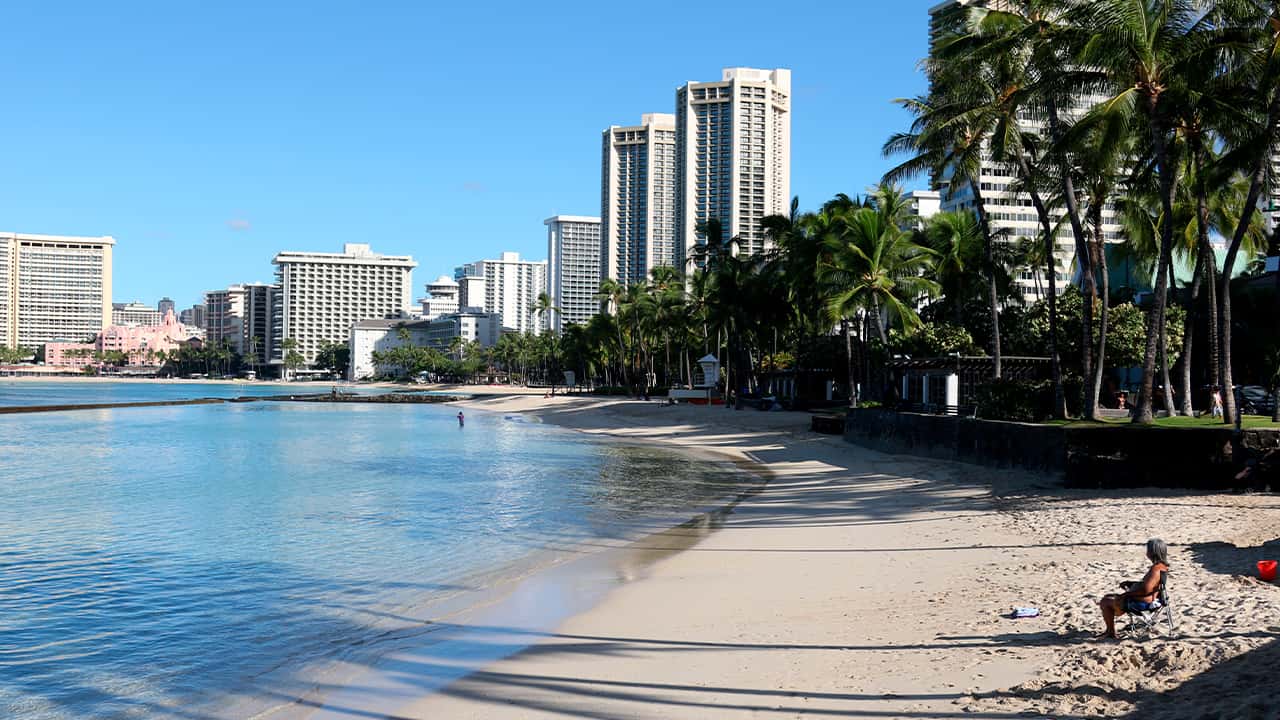 HONOLULU — Despite increasing coronavirus cases across the U.S., Hawaii officials hope to reboot tourism next week by loosening months of economically crippling pandemic restrictions, including a mandatory 14-day quarantine for all arriving travelers.

“They’re going to come here with this false sense of belief that, ‘Hey, I got tested, Hawaii, I’m clean. Here’s my paperwork. Let me enjoy my Hawaiian vacation,’ not knowing that the person in seat B on a five-hour flight gave them the coronavirus.” — Sen. Glenn Wakai

The plan, which was postponed after the virus surged in the summer, will allow Hawaii-bound travelers who provide negative virus test results within 72 hours of arrival to sidestep two weeks of quarantine.

But the Oct. 15 launch of the pre-travel testing program is causing concern for some who say gaps in the plan could further endanger a community still reeling from summer infection rates that spiked to 10% after local restrictions eased.

State Sen. Glenn Wakai, chair of the Committee on Economic Development, Tourism and Technology, said one problem is that the tests are not mandatory for all. Travelers can still choose to not get tested and instead quarantine for two weeks upon arrival, which means those with a negative test could get infected on the plane.

“They’re going to come here with this false sense of belief that, ‘Hey, I got tested, Hawaii, I’m clean. Here’s my paperwork. Let me enjoy my Hawaiian vacation,’ not knowing that the person in seat B on a five-hour flight gave them the coronavirus,” Wakai said.

Hawaii has lived under quarantine laws for months, but hundreds — at times thousands — of people have arrived daily since the pandemic started. Some have flouted safety measures, leading to arrests and fines for the scofflaws.

Before the pandemic, the state received about 30,000 visitors a day.

If the islands face another coronavirus surge because of a hasty return to tourism, another lockdown could spell economic disaster, Wakai said.

He said the state has mismanaged the pandemic from the beginning. Hawaii’s state epidemiologist and its director of health both left their positions in September after concerns were raised about their handling of the virus and the state’s contact tracing efforts.

Wakai also worries that reopening tourism before children are safely back in school could challenge parents who return to work in the tourism industry.

But others view the pre-travel testing plan as the best way to add a layer of protection while kickstarting the economy. Hawaii has had one the nation’s highest unemployment rates since the start of the pandemic, which ground to a halt nearly all vacation-related activity.

Hawaii Lt. Gov. Josh Green, who has spearheaded the testing program, acknowledged the risks but said the plan will give the islands a much-needed chance for economic recovery.

“It’s important that people know we welcome them as long as they’ve gotten their test,” Green said, adding that wearing a mask in public is still Hawaii law. The moon sets behind a runway at the international airport in Honolulu, Thursday, Oct. 1, 2020. After a summer marked by a surge of coronavirus cases in Hawaii, officials plan to reboot the tourism based economy later this month despite concerns about the state’s pre-travel testing program. (AP Photo/Caleb Jones)

Hawaii Is Partnering With Several U.S. Mainland Pharmacies and Airlines

Green, an emergency room doctor who recently recovered from COVID-19, said calls for testing at Hawaii’s airports don’t take into account capacity or cost. Even if the state could test all visitors, people wouldn’t get their results right away, he added.

“If we were to test everybody that came, we would have to have 8,000 tests” per day, Green said, estimating the number of visitors he thinks will travel to Hawaii at the program’s start. The state currently has about 4,000 tests available each day for residents and visitors.

As part of the plan, Hawaii is partnering with several U.S. mainland pharmacies and airlines for testing. Travelers will load their information onto a state website and mobile app that officials will use to track incoming passengers.

As part of the plan, Hawaii is partnering with several U.S. mainland pharmacies and airlines for testing. Travelers will load their information onto a state website and mobile app that officials will use to track incoming passengers.

Green said travelers must get the correct type of coronavirus screening — a nucleic acid amplification test — and suggests people work with designated companies.

He has also proposed implementing a surveillance testing program that would screen a percentage of arriving passengers who are in high-risk groups.

Dr. Anthony Fauci, who spoke with Green in a livestream video call Wednesday, said no matter what, some COVID positive vacationers will get into the state.

Travelers Will Face a List of Restrictions Upon Arrival

“The reality is, no matter what you do, there are going to be infected people who slip through the cracks. It’s inevitable,” Fauci said of Hawaii. “I can understand the anxiety of people on the islands saying, you know, if you just do a test 72 hours earlier and that’s all you do, then that’s not going to be enough.”

Fauci said that adding some kind of secondary screening would help.

“You’re not going to get everybody, but statistically, you’re going to dramatically diminish the likelihood that an infected person enters,” he said.

Travelers will also face a list of restrictions upon arrival in Hawaii — especially on Oahu which has seen the bulk of reported cases.

Still, some county officials say the plan is not ready. They want additional layers of protection for their individual islands.

On Tuesday, Big Island Mayor Harry Kim announced that his county would opt out of the testing program and continue to require all visitors to quarantine for two weeks upon arrival. Gov. David Ige on Monday denied a request from the island of Kauai that would have established a post-arrival testing program for visitors to that island. Both island mayors said they want another layer of testing for people arriving in Hawaii.

“A single pre-arrival testing program alone does not provide the needed level of protection for our Kauai community,” said Kauai Mayor Derek Kawakami in a statement. He said the island secured 15,000 rapid tests and will develop a plan to mitigate the virus’ spread.

‘Once I Get to Hawaii, I’ll Feel Much Better’

The blow to tourism has taken a toll on Hawaii residents who depend on the sector to survive. Scores of businesses have closed for good. Hotels have shuttered or operate under limited capacity. Bars remain closed and restaurants struggle with take-out only or a cap on the number of guests they can serve. The October measure could bring back paychecks for many workers.

“In a perfect world, we wouldn’t reopen until we had a vaccine,” said John De Fries, president and CEO of the Hawaii Tourism Authority. However, waiting that long, he said, “would take us out.”

Miriam Thorpe, a California school teacher, recently flew to Hawaii from San Francisco with her husband to visit family. She was nervous about the flight but said she looked forward to seeing her grandchildren for the first time in nearly a year.

“Not so sure about how safe it is on the plane or in the airports,” Thorpe said before leaving.

The Thorpes said they were tested for COVID-19 before they left, but would not get their results for several days after arriving in Hawaii.

Under the new rules, travelers like the Thorpes who do not get their test results in time for their trips will have to quarantine until their negative results are in. Those who test positive after arriving in Hawaii will have to isolate alongside their close contacts. They must be medically cleared of the disease before they can travel home.

“Once I get to Hawaii, I’ll feel much better,” Thorpe said before boarding her flight to paradise.

Carnivorous Tasmanian Devils Back in Mainland Australia After 3,000 Year Absence