Gloves Come Off in Contested Race for Fresno School Board 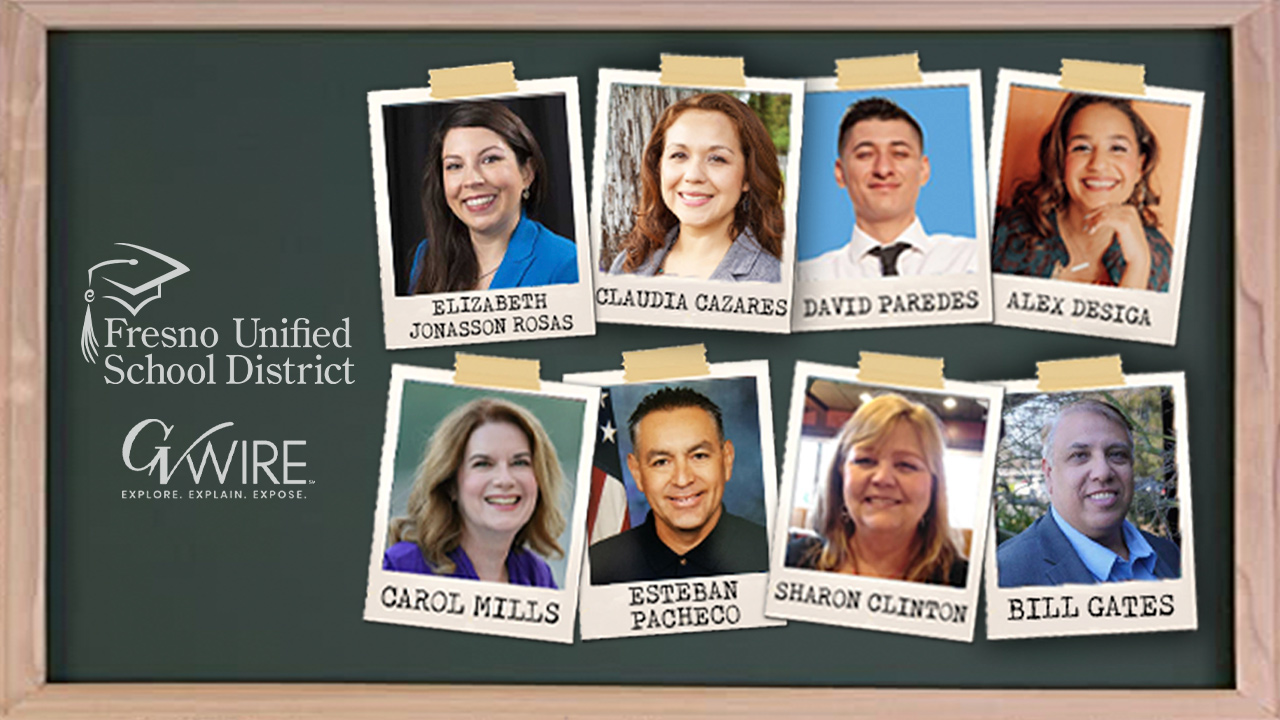 With responsibility for a $1 billion school district budget, the trustees of Fresno Unified have a say in spending more money than almost any other local public agency in the Central Valley. In the Nov. 3 election, three of the district's seven board seats are on the ballot.

Incumbents are running for re-election in all three races, with two drawing challengers looking to unseat them.

In Fresno Unified, only residents living in each specific trustee area can vote for candidates seeking to represent them on the school board. (In Clovis Unified, trustees are elected by voters across the entire district.) A map of the Fresno Unified Trustee Area boundaries can be found here.

GV Wire℠ asked those running this year what their expectations for the district are and the best way to govern. Perhaps the most competitive race — based on fundraising and online campaigning — is in Area 5, known as the Fresno High School area. Carol Mills, 65, is seeking her fifth term on the board, having been first elected in 2004. She recently left her position as an attorney with the California Court of Appeal.

Mills' top competition may come from David Paredes, 24, who has gained support from Fresno's progressive community. He is a community organizer and helped establish the local Democratic Socialists of America chapter.

Even before running for office, Paredes has been actively promoting left-leaning social issues, such as environmental justice, gun control and economic policy.

That's a step too far for the district, Mills said.

"Paredes holds extreme views as shown by his tweets and retweets — vote communist, abolish the police department, and loot local businesses. I do not agree with Paredes' extreme views," Mills said via email. "I believe my views are in alignment with the voters in my area. I continue to put the interests of our students and children first, and try to find common ground and work with people of diverse backgrounds and viewpoints."

Not true, Paredes rebuts. He points to the success of Bernie Sanders in the primary as evidence that the area is progressive-leaning. Sanders received the most votes of all  Democratic presidential candidates in Fresno county, as well as in the 16th Congressional District, which mostly overlaps with Trustee Area 5.

Paredes says Mills is stuck in her ways.

"She's a career politician who cares simply about the status quo and who has fallen behind and who has not met the needs of our community, specifically our students and our families," Paredes said. "I believe it's time for us to stand up and to say we need change. We need equity. We need equity today and not tomorrow."

Goals for the Next Term

Mills points to adding career technical education, a 92% graduation rate at Fresno High School, and increased health care — including social and emotional support — for students as her top accomplishments over the last four years.

"The goal for the next term is to maintain student programs and support despite a 28% budget reduction, maintain health care for employees, address any learning loss from distance learning and continue facility improvements," Mills said.

Providing jobs and including a "green curriculum" are also parts of Paredes' vision.

Mills and Paredes disagree on the district's contract with Fresno to provide police officers on campus.

"School Resource Officers are one component in making schools safe for students and staff.  Discussions should be had on whether they should be in full uniform, and how they fulfill their role on campuses," Mills said.

Paredes says at the very least, the police contract needs to be cancelled when no students are on campus because of the COVID-19 pandemic.

"We need to reimagine public safety in our schools and to invest more in prevention. Our youth understand and know that police officers aren't going to help with their academic success," Paredes said.

Alex Desiga and Sharon Clinton are also seeking to take over Mills' seat.

Desiga grew up in Fresno and attended Fresno State. She recently came back to the area after teaching in Malaysia.

"I would love to bring a global perspective and innovative approach to solving complex issues. I don't want to keep doing the same thing, hoping for a change. I want us to constantly change and iterate and not be afraid to move forward," Desiga said.

Clinton, a retired job specialist with Fresno County, says she's been active in national and state politics. A state Democratic party official asked her to run and "(I) decided to throw my hat in the race."

‼️ SCHOOL BOARD FORUMS 🎥💻
Tune in to learn more about the candidates running for school board trustees! ✨ Claudia Cazares is running for her second term to represent the Hoover High School area. Her top accomplishment over the last four years, she says, is investing in special education.

"We've added counselors to the schools. We've added social workers, nurses and physical therapists. How do you re-organize the programs to serve those students that are among our most neediest of our community?" Cazares said.

Her goal for the next four years is expanding vocational education.

"We want to catch those students that are not necessarily geared up for college or university and still have them be ready to be good citizens, productive citizens and good neighbors upon graduation from high school," Cazares said.

Pacheco said he wants the district to focus on academic success and not get distracted by mundane things.

"Parents in the Hoover district have a choice: accept schools that fail to equip our children, or they can find a better future a few blocks away-in Clovis Unified Schools," Pacheco said.

This is the second election Gates has run in 2020. He finished fourth in the Fresno mayoral race in March. Elizabeth Jonasson Rosas, 36, did not draw a challenger for what will be her second term on the board. She represents Area 2, the Roosevelt High School area.

She says expanding dual immersion programs, career technical education and replacing juvenile hall with an educational facility are her top accomplishments during her first term.

Returning students to the classroom is her top goal looking forward.

"We have to do some serious work on catching people up after after COVID. I think that this has further exacerbated a lot of the educational inequities and issues in our district. Once we're able to get back safely, we need to invest in catching people up, additional sports, additional after schools. I've always been for the expansion of the universal after school programs," Jonasson Rosas said.

Last month, the school board voted 4-3 for a resignation agreement with chief financial officer Ruthie Quinto.

As reported by GV Wire's Nancy Price, the contact will pay Quinto one year of her salary — more than $250,000 plus benefits — while she is officially on administrative leave. No formal reason was given of the decision made in closed session.

Of the three board members up for election this year, Cazares voted in favor of the contract; Mills and Jonasson Rosas voted against. All three said they could not say much because it is a personnel issue.

"All of us are aware that Ruthie (Quinto) was a unique, probably irreplaceable person to our district. Our financial stability is pretty much due to her savviness and her education and expertise that can't easily be replaced. I'll leave it at that," Cazares said.

"The pay out to Ms. Quinto exceeded the amount to which she was entitled under her contract, so I voted against it," Mills explained.

"I take that absolutely serious. I know that that's something that our constituents care about. When we go out to the community and ask the community for funds, I want to be able to say that they are going absolutely to the classroom. They're going to students. That's where I stand," Jonasson Rosas said.

West Fresno Campus Will Be ‘Game-Changer’ for Disadvantaged Community

US Hits All of Iran’s Financial Sector With Sanctions