Dolores Huerta, co-founder of the United Farm Workers union and renowned civil rights activist, was honored Friday morning in Fresno State’s Peace Garden with a gingko tree planted to commemorate her 90th birthday and her legacy.

The event was part of an ongoing commemoration by the 23-campus California State University system of Huerta’s life and her commitment to nonviolence and social justice that continues today through the Dolores Huerta Foundation. The university ceremony also marked the 151st birthday of Indian peace activist Mahatma Gandhi and the 30th anniversary of the Peace Garden’s founding. 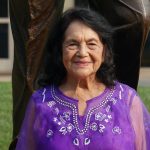 Friday was a big occasion for the diminutive Huerta in many ways — the Fresno State commemoration was combined with a surprise proclamation by Fresno City Councilman Paul Caprioglio that Friday was Dolores Huerta Day in Fresno. And it also marked Huerta’s first public outing since the pandemic arrived in March.

The last outing, she noted, was to meet with House Speaker Nancy Pelosi in Washington, D.C., to commemorate the 100th anniversary of women’s suffrage in the U.S.

“I’m really quite thrilled to see so many people,” she said to the two dozen or so dignitaries, students, university employees, and news reporters at the gathering, which the university purposely kept small and widely spaced so as to limit any potential spread of the coronavirus.

Emilio Huerta, who accompanied his mother to the ceremony north of the Madden Library, said she came to Fresno State over the objections of family members. “My sisters weren’t very happy,” he said while watching his mother pose for photos near the Peace Garden statue of Cesar Chavez, who co-founded the UFW with Dolores Huerta.

One day Dolores Huerta’s gingko tree, now spindly, may shade the nearby statue of Chavez, symbolic of their longtime partnership in the labor movement that fought on behalf of farmworkers for better pay and benefits through marches and protests that remained nonviolent in the spirit of Gandhi, whose statue is at the far end of the Peace Garden. 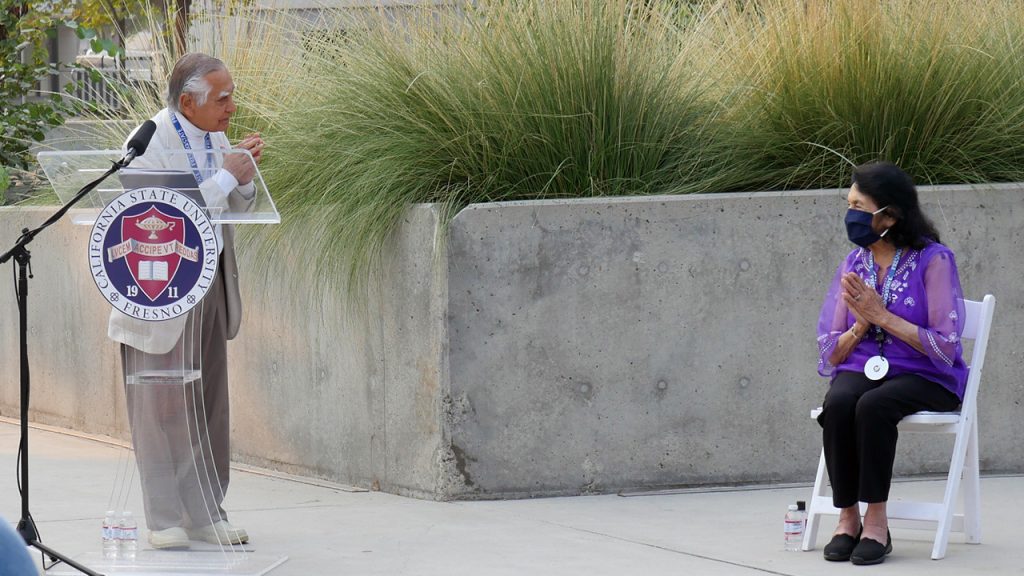 Fresno State President Joseph Castro introduced the guest of honor as Dr. Huerta in recognition of her honorary doctorate awarded by the CSU for her lengthy public service.

Castro, himself an iconic figure — in January he will become the CSU’s first Mexican-American chancellor — praised Huerta for her self-sacrifice while spearheading the struggle for social justice through peace and nonviolence.

“Today we celebrate and honor her fearless leadership in the fight for civil rights and her deep roots in California’s Central Valley,” he said. “As a farmworker, a teacher, a community leader, and a mother, and as an iconic activist for social justice, Dr. Huerta has proven herself a resolute champion of human rights, labor rights, immigrant rights, civil rights, environmental rights, women’s rights, and LGBTQ rights.”

At the same time, Castro said, Huerta has strongly supported the need for access to higher education and has been “uncompromising in her advocacy for equity in education.”

Huerta used the occasion to urge support in next month’s election for Proposition 15, the so-called split-roll initiative, that will raise an estimated $12 billion for schools by changing how large businesses and industries are assessed for tax purposes.

Opponents of the measure have falsely stated that Proposition 15 would overturn the decades-old Proposition 13 that protects homes and small businesses from market-value taxation, but they will maintain their current purchase-price assessments if the split-roll initiative passes, she said.

Huerta said she is heartened to see the political activism that has spread across the U.S., but not the violence that has erupted at times alongside it.

“It’s really important that we continue to spread the word of nonviolence,” she said. “It’s so important, especially right now in these critical times we’re living in. Some people … are trying to encourage people to use violence. It’s important that we all do what we can do get more people to march and more people to protest, but we do have to denounce any kind of violence, because we know what that leads to.”

Huerta, speaking later to reporters, said much progress was made by the UFW but the fight for the rights of farmworkers continues. Many Central Valley agricultural employers are still battling workers over the right to organize and bargain for wages and working conditions, she said.

“It’s unfortunate that they would rather spend millions of dollars fighting the union instead of using those millions to give the workers the benefits that the union is trying to get for them, like health care and pension benefits and better wages,” Huerta said. “It’s a shame that we have this rich agricultural economy, so much wealth, and yet the workers themselves live in such poverty.

“And it would be wonderful for the agricultural employers to come into the 21st century, pay workers a living wage, not a minimum wage, a living wage, so that they can also prosper from the wealth that we have here in the Valley.”