Will Creek Fire Make Home Insurance Even Harder to Get in 'High Risk' Areas? 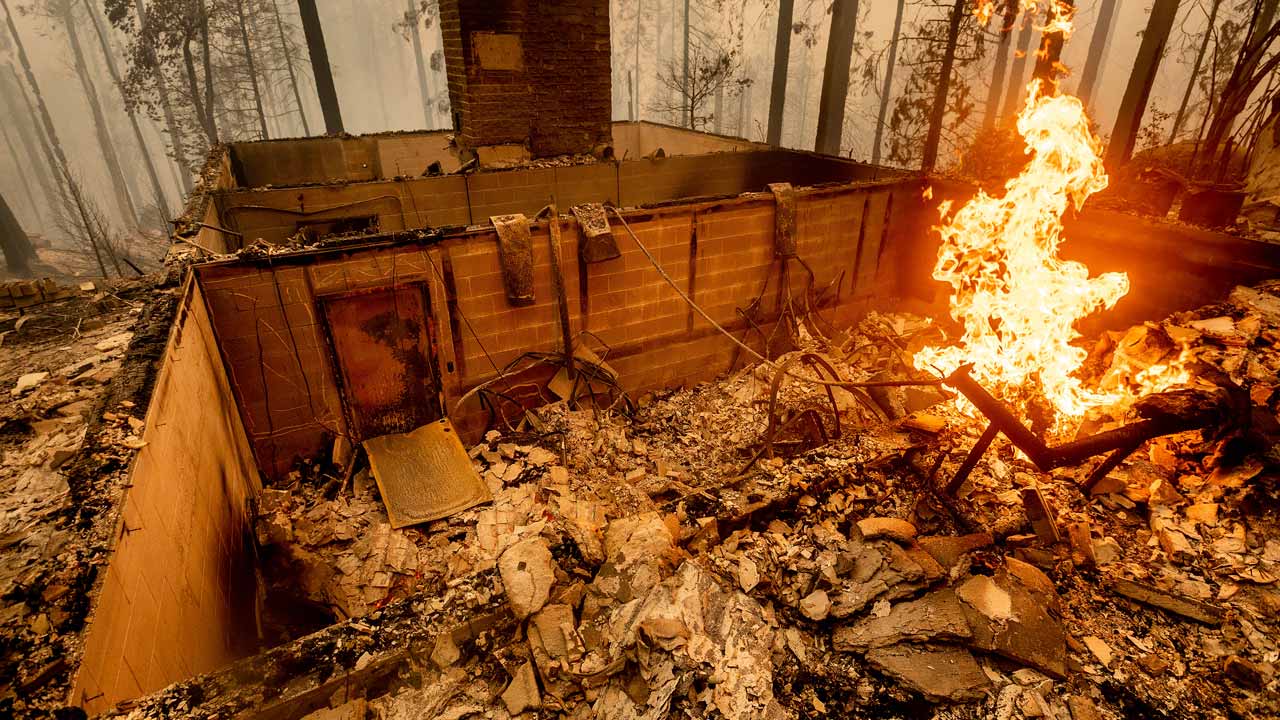 The latest totals from CAL Fire show 855 structures destroyed (identified as residential, commercial and “other”), and another 71 structures damaged by the Creek Fire.

Five of the 20 largest wildfires in California history have occurred in 2020, with the Creek Fire now confirmed as the single biggest in terms of acres burned.

It is also the 17th most destructive fire ever in recorded in the state. The 2018 Camp Fire tops the list.

Now, the fallout from the insurance companies issuing non-renewal notices is starting to hit home, literally.

The California Insurance Commissioners office says despite the state approving many insurance rate increases over the past decade, non-renewals for homeowners at risk of wildfire have continued. The commissioner is holding a public meeting on Oct. 19 as part of an effort to address trend and explore regulatory changes. 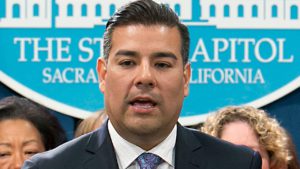 “I will use my authority under California law and Proposition 103 to protect consumers and the future of a sustainable insurance market in our state.”–Ricardo Lara, California Insurance Commissioner

Fresno County Assessor Paul Dictos is now offering property tax relief for victims of the Creek Fire. Taxpayers who suffered $10,000 or more of damage to their taxable property are eligible for a reassessment of their property value if a claim is made within twelve months of the loss.

A new Berkeley IGS Poll shows a 54% majority of Californians have little confidence in government’s ability to protect their local area from the threat of wildfire.

Corbin Souza runs a Clovis insurance agency and tells GV Wire℠, “nobody knows” what’s going to happen in the fallout from these fires.

Despite the seemingly endless barrage of bad headlines, there are some simple and very cheap things residents can do themselves to keep a home standing through a wildfire.

“It’s always a challenge to write anything in elevation above 1,500 or 2,500 foot elevation.”–Corbin Souza, Corbin Souza Insurance in Clovis

“It’s always been an issue with elevation,” says Souza. “It’s always a challenge to write anything in elevation above 1,500 or 2,500 foot elevation.” He says insurance carriers see problems with the brush and the ability of fire departments to protect the communities.

Souza says he has not yet heard of any insurance companies pulling out of communities affected by the Creek Fire, yet. Souza says there also may be older homes or cabins that burned in the fire that will have to rebuild up to current codes.

Forbes reports if you haven’t recently reviewed your homeowners insurance policy or you’re not sure how much home insurance you need, now is a good time to take a look at it. That’s because you want your dwelling coverage to keep pace over time with the changing costs to rebuild the house.

How to ‘Harden’ Your Own Home 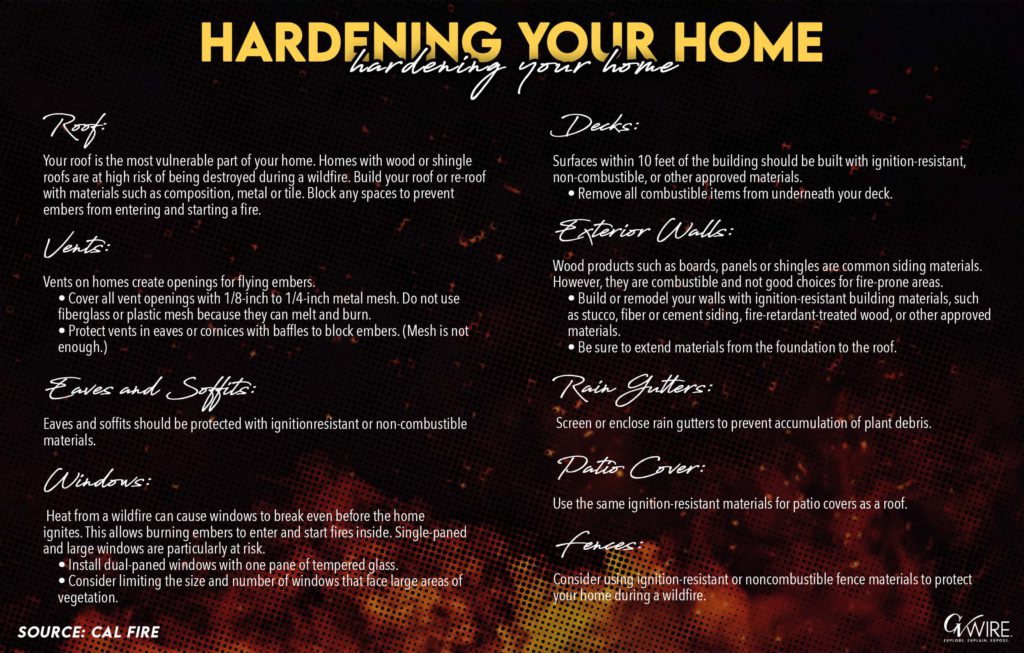 Print this off and follow CAL FIRE guidance to keep your home safe from wildfires. (GV Wire/Alexis DeSha)

Fire Hazard Severity Zones as determined by the California Department of Forestry and Fire Protection.

Related Story: Creek Fire: ‘We Didn’t Used To Have These Kinds of Fires.” ...

The state of California maintains an interactive mapping website showing these zones. The state describes a FHSZ as a mapped area that designates zones (based on factors such as fuel, slope, and fire weather) with varying degrees of fire hazard (i.e., moderate, high, and very high). FHSZ maps evaluate wildfire hazards, which are physical conditions that create a likelihood that an area will burn over a 30- to 50-year period. They do not take into account modifications such as fuel reduction efforts.

You can look up your address to see if you live in a hazard area by clicking this link.

‘The Marketplace has Largely Collapsed’

The NY Times reports, “The marketplace has largely collapsed” in those high-risk areas, said Graham Knaus, executive director of the California State Association of Counties, which has pushed state officials to address the problem. “It’s a very large geographic area of the state that is facing this.”

In 2019, Lara banned insurance companies from dropping people in or near zip codes struck by recent wildfires. It was the first time Senate Bill 824 had been used— authored in 2018 by Lara while he was serving as state Senator — in order to give temporary relief from non-renewals to residents living near a declared wildfire disaster. The ban was never meant to be a fix. It’s set to expire December 5 of this year.

ABC7 in the Bay Area reported just last week that insurance companies are reluctant to renew fire insurance for countless Bay Area homeowners. AAA informed Ben Lomond resident Denise Fritsch in July it would not be renewing her homeowner’s policy because it determined she lived in a fire zone.

On Aug. 5, State Farm offered Fritsch a policy, writing in an email, “You have two options of when you can start the policy.” But, after the CZU Complex Fire broke out, State Farm had changed its mind writing her on Aug. 24, “Now with the fires, we are in what’s called a moratorium, which means right now we are unable to write policies in certain zip codes and Ben Lomond is in that zip code.”

The FAIR plan was created in July 1968 following the 1960’s brush fires and riots. It is an insurance pool established to assure the availability of basic property insurance to people who own insurable property in California and who, beyond their control, have been unable to obtain insurance in the voluntary insurance market.

The plan is not part of a state agency, and no public funding, or taxpayers’ monies are involved.

Forbes says before you can get a policy through a state’s FAIR plan, you usually need to be declined by a certain number of insurers first. For example, in California, you can only get insurance from a FAIR plan if you’ve been rejected three times by insurance companies.

Lara’s says his October hearing will be the first step toward regulatory actions meant to protect residents from the increasing risk of wildfires.

“I will use my authority under California law and Proposition 103 to protect consumers and the future of a sustainable insurance market in our state,” said Lara in a press release. “Our current reality of increasing insurance premiums and non-renewals hurts those who can least afford it, including working families and retirees on fixed incomes.”

Lara says his efforts will focus on several areas:

Clovis Unified High Schools Might Not Reopen for Classes Until January