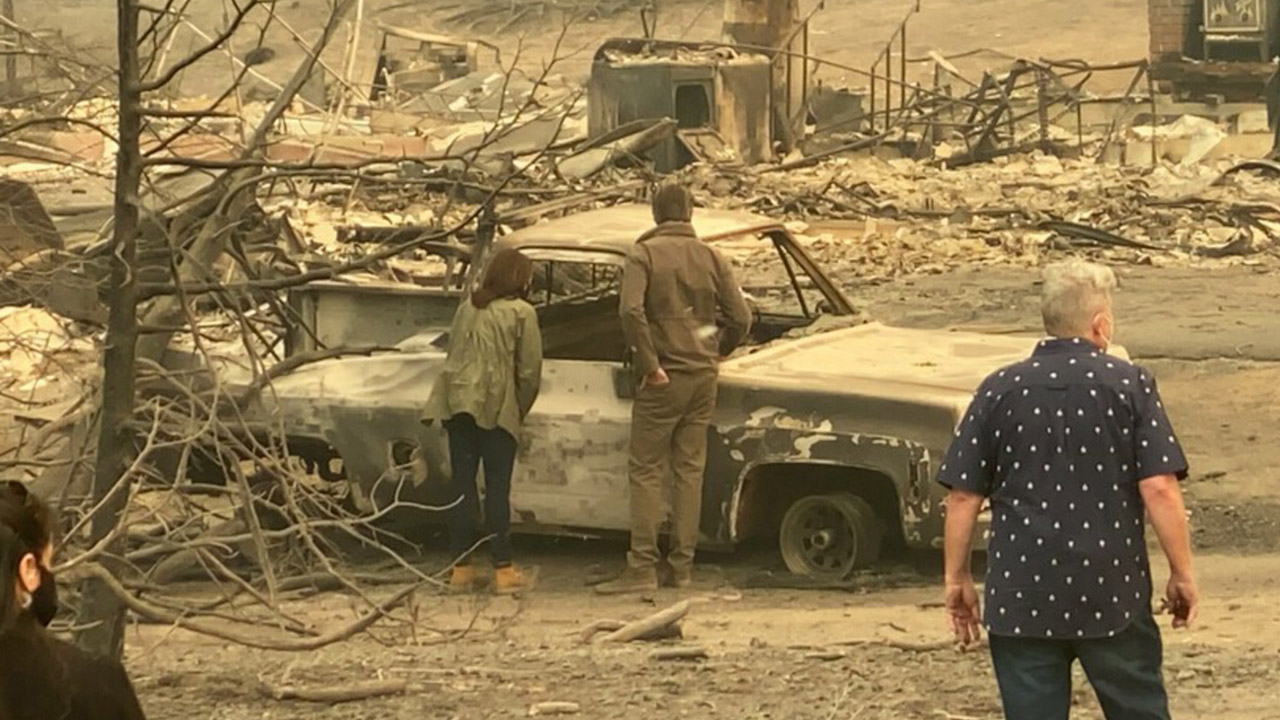 While there, they bumped elbows with American Red Cross of Central California volunteers who are helping Creek Fire evacuees.

A campus gym has been converted into a Red Cross evacuation point for the estimated 10,000 residents who continue to be displaced by the wildfire in Fresno and Madera counties.

“Thank you all so much,” Harris said upon entering the gym. She also took a socially distanced photo with volunteers in Red Cross t-shirts.

Before heading back to the airport, Newsom and Harris capped off their four-hour tour at Fresno Fire Station 11, at Fresno Street near Barstow.

Harris and Newsom delivered sack lunches to firefighters in the station bay and chatted for several minutes.

Outside the station, about two dozen supporters of President Donald Trump yelled and waved campaign flags.

Harris and Newsom were briefed on the Creek Fire on Tuesday morning at Pine Ridge Elementary School in Auberry.

After the briefing, Harris and Newsom crossed Auberry Road and examined a burned-out residence.

“Sadly, these wildfires and the devastation they cause are utterly predictable,” Harris said. “Especially in residential areas, and you’ll see where the fire has just swept through. Everything is gone except the chimney. … Those chimneys remind me of tombstones.”

Harris added that “this is not a partisan issue. … We have to do better as a country.”

And, she cited climate change as fueling the wildfires devastating communities throughout the western United States.

“We have to understand that California, like so many other parts of our country, has experienced extreme weather conditions,” Harris said. “It is incumbent on us, in terms of the leadership of our nation, to take seriously these new changes in our climate, and to do what we can to mitigate against the damage.”

Harris praised firefighters who are battling flames while their own homes are burning: “They are working around the clock without rest. I just heard about how they have been working 90-hour shifts, some of them, to save families, to save property.”

From there, the motorcade began a trip to Clovis North High School, where Harris and Newsom are expected to talk with evacuees and representatives of the American Red Cross of Central California. 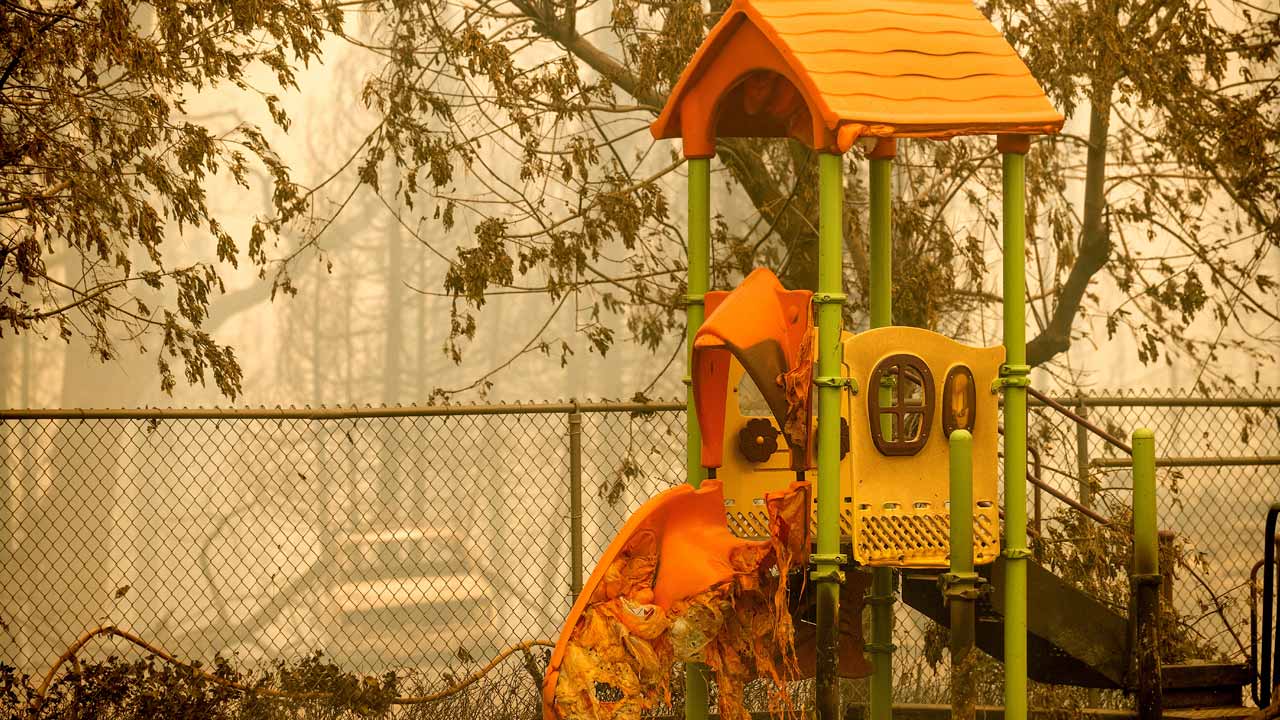 A melted slide stands in the playground at the Pine Ridge Elementary School in Auberry after the Creek Fire burned through the area on Tuesday, Sept. 8, 2020. The school survived the blaze. (AP/Noah Berger)

Her motorcade later was spotted at the bottom of the Highway 168 “four-lane.” She reportedly was headed to Pine Ridge Elementary School below the community of Shaver Lake.

The San Francisco Chronicle’s Dustin Gardiner is the pool reporter for the Harris campaign today.

“Harris, who wore a green jacket, white shirt and jeans, quickly boarded her motorcade. She did not answer questions on the tarmac,” Gardiner reported.

Sen. Harris left the airport after about five minutes. Later, she and Newsom are expected to meet with emergency personnel for an assessment of wildfires. They will also tour an evacuation center this afternoon. 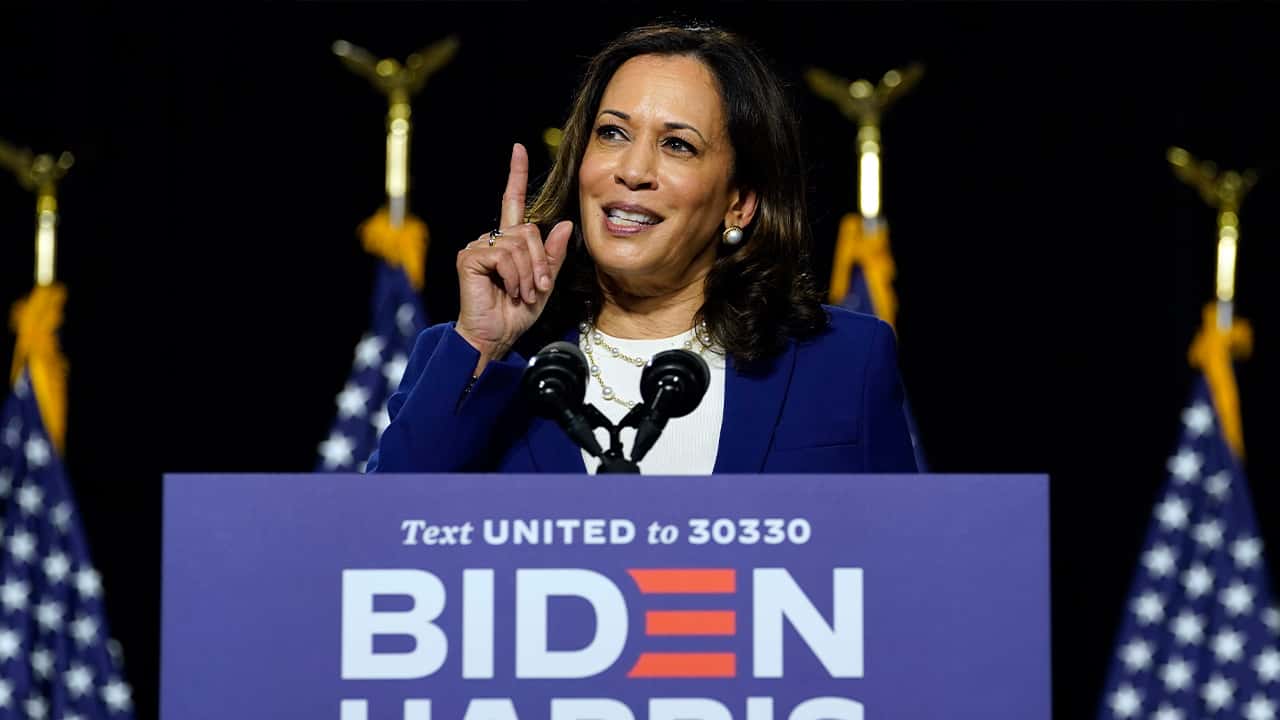 Petalo, Not Charmin: Virus Brings Mexican Toilet Paper To US