A High Sierra Creek Fire Rescue Fit for an Opera 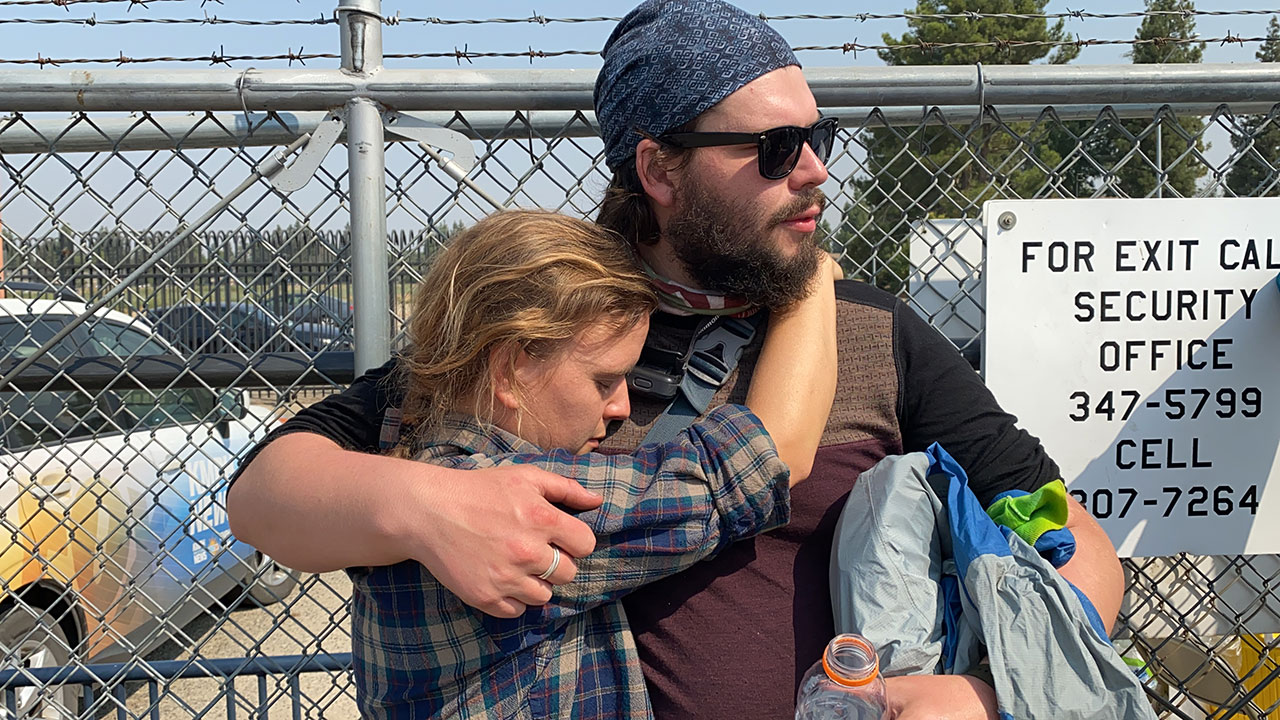 Harlan Hays wanted to unwind and disconnect from society for the weekend.

“I looked forward to not having cell phone service,” Hays said.

The COVID-19 pandemic hasn’t been kind to his job as a singer with the San Francisco Opera.

With friend and fellow opera singer Reid Delahunt, the pair planned a five-day hike on the John Muir Trail.

The men met six years ago at the San Francisco Conservatory of Music and have been “best buds ever since.”

The Creek Fire forced a change of plans and an emergency evacuation. The pair returned to Fresno on Tuesday morning in a Chinook helicopter.

Related Story: Creek Fire: ‘We Didn’t Used To Have These Kinds of Fires.” ...

Hays and Delahunt were two of hundreds airlifted Tuesday by the California Army National Guard. Several families and friends of those rescued gathered at the base in east-central Fresno near the airport to reunite with loved ones.

Rescue choppers pulled out 164 people from the Sierra National Forest through the morning and were working to rescue 17 others, Gov. Gavin Newsom said during a briefing on Tuesday. The governor described pilots wearing night-vision goggles to find a place to land in the darkness of the early morning hours for the initial evacuation.

“We noticed the big cloud of smoke out to the west. We figured, oh, that’s probably pretty close to where our car is, we should probably hike out. So we did. On the way, we met many people saying it’s time to evacuate. This whole area is going to be evacuated. You have precious little time to make it to the boat to get out,” Hays recalled.

Hays and Delahunt were directed to shelter at the Vermilion Valley Resort on the western shore of Lake Edison.

“Thank you, Vermilion Valley Resort for everything you’ve done for us,” Delahunt said.

From there, Hays made the most of the experience.

“We made a whole bunch of friends. It was a wonderful bonding experience,” Hays said. “Being deprived of any type of community for the past seven months because of COVID-19 — finally being able to be around people again and make friends — it was wonderful.”

Hays put to use his new ukulele skills, taught to him by his fiance. He also regaled the trapped campers with his opera singing.

Hays said he wasn’t scared but on edge.

“We’re all working together. We all knew that the worst could happen and hoping it didn’t, and it didn’t. We were able to get here from the help of our wonderful fire department, and our fire department and Fresno sheriff’s department,” Hays said.

David Angulo took this video as he prepared to board this Chinook that arrived to rescue him and other campers and hikers after they became stuck in the #CreekFire ⁦@KCBSRadio⁩ pic.twitter.com/3txWSiwHkR

Hays’s fiance, Emily Shumway, drove from San Francisco to reunite with her loved one and his friend.

“I did not sleep much for the last few days,” she said. She said friends and family helped keep her calm.

While sheltering at the resort, Hays was finally able to contact Emily.

“That was the hardest part, not being able to call,” Hays said.

Isaac Rodriguez, a chef from San Diego, just got rescued from the Edison Lake area. pic.twitter.com/AiKawscDJM

A Helicopter to the Rescue

“It’s a dream come true. I’ve always wanted to be in a helicopter, flying into the Sierras in an emergency evacuation. Like, that’s so epic. I can tell the story forever now,” Hays said.

Because the smoke obscured the sky, the hikers experienced cold conditions. Even the exhaust from the helicopter provided a relief.

“It just felt amazing. Exhaust kind of smelled nice after all the forest fires,” Hays joked. The smoke diminished the air quality.

“It was getting harder to breathe. There was some ash falling from the sky and they made it a little hard to be in the moment,” Delahunt said.

Hays said the air was so dry and smoky it gave him bloody noses.

“The Sierras are no joke. You got to be on your toes,” Hays added. “It’s a dangerous place. That’s why I go.”

Creek Fire: ‘We Didn’t Used To Have These Kinds of Fires.” Logger Blames Poor Forest Management