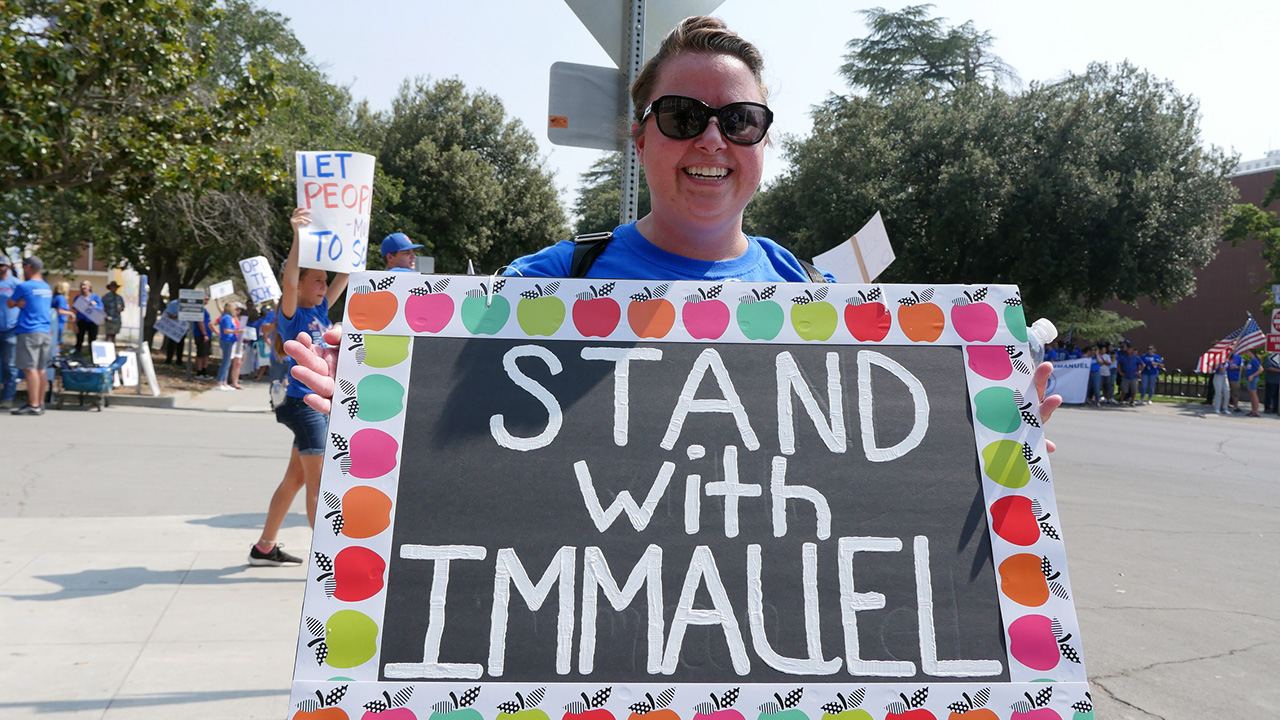 Fresno County filed legal action against Immanuel Schools to shut it down. The private K-12 school opened on Aug. 13, defying state and county health orders that prohibit schools from offering full, in-person instruction when the county is on a state monitoring list.

“We specifically applaud in this case the work in partnership with that county and its leadership in advancing our collective goals.” — Gov. Gavin Newsom

A judge this week denied the county’s request for a temporary restraining order, which allows the school to remain open for now.

Newsom: ‘I Appreciate the County’s Efforts’

“I appreciate the county’s efforts. We’ve been very clear in terms of the guidelines. (We) want to keep people safe. Not just our kids, but keep the paraprofessionals, keep our teachers safe. There is a reason the county health officers are in alignment broadly with these state guidelines,” Newsom said.

The governor spoke during his semi-regular noon news conference with media.

“We stand by what we have asserted, what we are promoting, what we are doing here in the state of California. We specifically applaud in this case the work in partnership with that county and its leadership in advancing our collective goals,” Newsom said.

Newsom also introduced a new state monitoring system, using color codes based on the number of positive COVID-19 cases and rate of infection in each county.

Based on the new criteria, Fresno County is at least five weeks away from meeting standards allowing schools to reopen.

Another Immanuel Hearing in September

Tharpe ruled that the county did not prove there was an imminent public harm with the operation of the school. In its filings, Immanuel argued the school’s population has achieved herd immunity, mitigating the risk of COVID-19 transmissions.

The case will return to court on Sept. 15 to hear the county’s request for an injunction — another legal maneuver to close the school.

“I support parents having the choice to have their kids going back to school. I think kids need to be in school and there are many kids suffering as the result of extended school closures,” — Fresno City Councilman Garry Bredefeld

Despite the setback, county attorney Daniel Cederborg said the judge did not rule on the merits of the case and was optimistic about the upcoming court hearing.

While Tuesday’s case was being heard, hundreds of Immanuel supporters gathered outside, cheering and singing.

Immanuel, along with eight other plaintiffs, are petitioning the state Supreme Court directly to lift the state’s school closure order. A hearing date has not been set.

Clovis Christian is one of the plaintiffs.

Newsom declined to make a comment about specifics of the state case.

“I appreciate this ongoing dialectic as it relates to those that want to move quickly. But we continue to commit and are fully resolved to moving safely. And so that’s our foundational principle. That one is universal. It’s been consistent as it relates to schools.”

The issue of the Immanuel court case also came up during yesterday’s Fresno City Council meeting.

“I support parents having the choice to have their kids going back to school. I think kids need to be in school and there are many kids suffering as the result of extended school closures,” councilman Garry Bredefeld said.

Bredefeld said it may be harder to detect abuse with no in-person instruction.

“Some people have intentionally violated all the guidance that the public health officers have given and the city rules,” Arias said.

He cited the courthouse rally, where very few — if any — Immanuel Schools supporters were wearing masks.

“It’s an intentional and selfish act,” Arias said. “If we can’t do something as simple and selfless as wearing a mask, we’re not going to get to the point where my kids and everybody else’s kids can go back to school safely.”