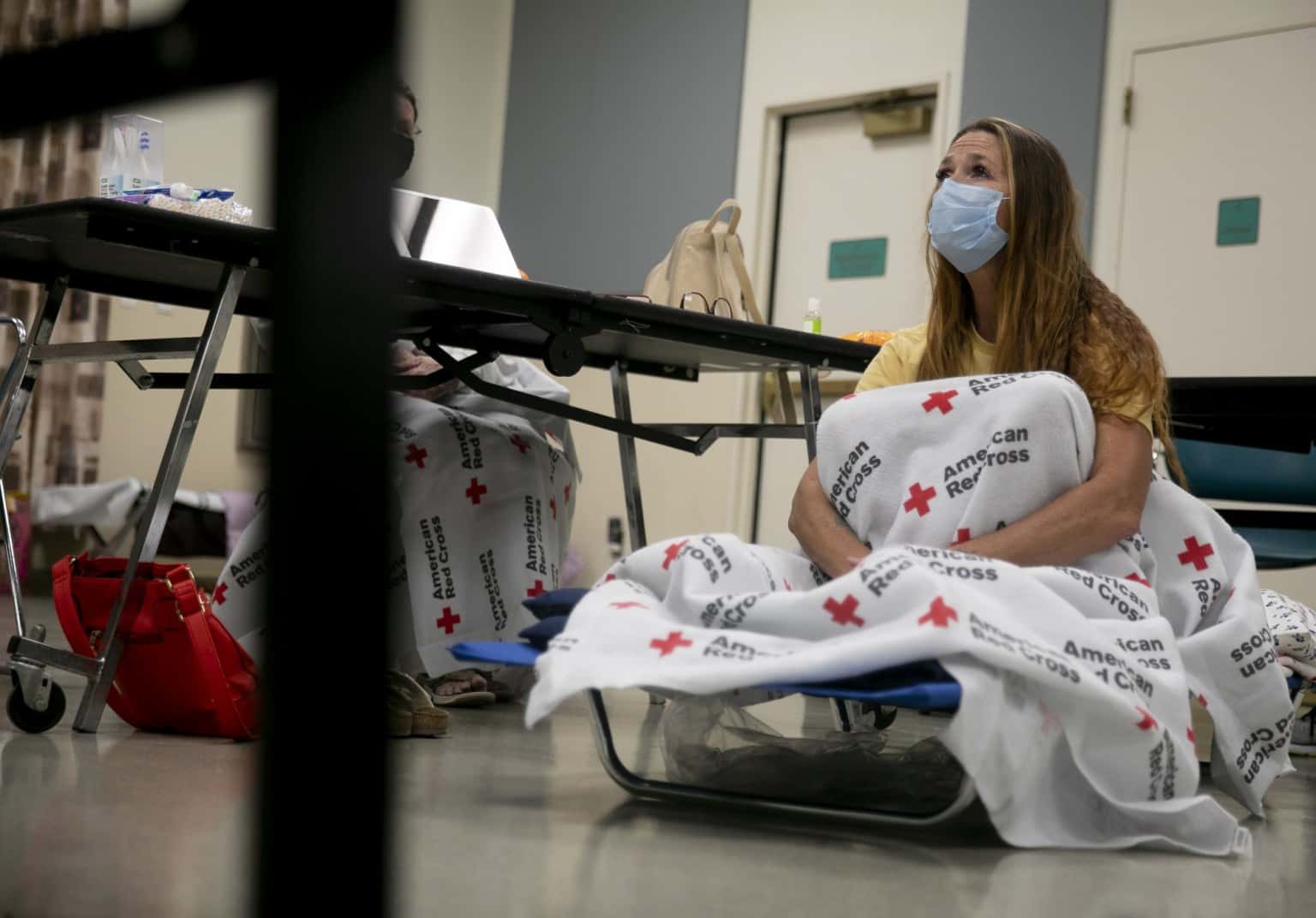 As ash drifted down from the fires burning through Solano County, a woman sweating under the smoke-reddened sun dug through her car, searching for an adapter for her husband’s oxygen machine.

The couple had fought traffic on Wednesday to reach the evacuation shelter at Vacaville’s Ulatis Cultural Center — but, once there, they realized the key piece was missing. 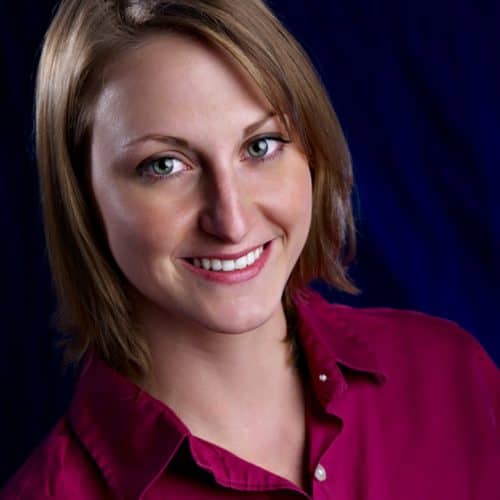 The smoke was bothering him, but he had his portable tank and that would have to do, she said. She wasn’t driving back. “I had a heck of a time getting out of there.”

Californians, particularly people with serious health conditions, are caught in a collision of crises: Fires are churning out dangerous smoke amid a record-baking heatwave and the relentless coronavirus pandemic.

The crises are particularly acute in the Central Valley, which is a hotspot for triple-digit temperatures, billowing smoke and ash from lightning fires, unhealthful smog and rising infection rates.

This dangerous combination has Californians unable to escape from the smoky air and reluctant to leave home to escape the heat. Kelli Mummert, right, with her mother, Dawn Isnor, and youngest son Max, sheltered at the Ulitis Community Center in Vacaville after evacuating their homes on August 18, 2020. Photo by Anne Wernikoff for CalMatters

For all three crises, lower-income people shoulder the worst of the health risks and, according to a recent study, they also have less access to air conditioning.

“If you took each of those hazards, the coronavirus, the air pollution, and the heat — essentially, it’s the same individuals, or the same risk factors,” said Helene Margolis, an associate professor of internal medicine at the University of California, Davis. Weighing the heat, the air and the virus, she said, “What am I not worried about?”

Many Californians evacuating the fires, including the lightning-sparked LNU Lightning Complex fire burning through Solano and four other counties, are forced to make an impossible choice: go inside where the air is cool and risk the virus, or stay outside in the smoke and 100-degree heat.

“We’re going to catch on fire and we’re going to be dead, or we’re going to go someplace where there’s more than eight people,” said Shawnee Whaley, 57, as she and her 79-year-old mother from Vacaville sheltered inside the Ulatis Cultural Center, where people’s temperatures were checked at the door. “And we’re taking that chance.”

Central Valley Is a Hotspot for Everything

It’s a choice that the coronavirus is complicating even for Californians outside the reach of the flames, particularly for those in the Central Valley, where dangerous air quality is combining with 100-plus degree heat.

While record-breaking temperatures show signs of dropping from Redding to Bakersfield, forecasts for the next week still hit triple-digits. And with wildfires spreading across California, the San Joaquin Valley Air District warns of unhealthy air.

The Central Valley has some of the nation’s worst air quality, which routinely exceeds federal health standards for smog and soot. Even before smoke choked the region, ozone, a main ingredient of smog, hit levels unsafe for sensitive groups in the Madera, Merced, Visalia and Bakersfield areas, and Fresno’s air was declared unsafe for everyone on Monday.

The one-two punch of unhealthful air and heat leaves more than 7.6 million Californians in the Central Valley fighting for breath. The 450-mile-long valley is veined by freeways, patched by agricultural fields and spattered with oil and gas production. Mountain ranges encircling the valley trap soot and smog-forming pollutants.

On their own, air pollution and wildfire smoke can be deadly — raising the risk of heart attacks, strokes, asthma and lung cancer. The heat stews this toxic soup, further worsening air quality and straining the cardiovascular system as the body works to cool itself.

Even in healthy adults and children, heat can cause cramps and fainting. More serious issues can result when people exert themselves or can’t escape the heat.

Older adults, children under five, those with outdoor jobs or diseases that make it harder to regulate heat — like heart and lung conditions, diabetes, kidney disease and psychiatric disorders — are especially vulnerable.

Compounding these dangers is the coronavirus pandemic, which is tearing through the Central Valley. All but three of the 18 Central Valley counties are on the state’s watch list for failing to stabilize infection rates and hospitalizations.

The virus disproportionately infects and kills Latinos, many of whom live in the valley. For instance, Kern County, which is on the virus watch list, is about 55 percent Latino. In a dangerous feedback loop for the valley, studies show air pollution increases coronavirus fatalities. The Centers for Disease Control and Prevention has warned that wildfire smoke can increase susceptibility to lung infections, including the novel coronavirus.

For Diana Mireles, a 51-year-old community organizer and caregiver for her 59-year-old husband Jose since he experienced a stroke, the fires add to a constant fug surrounding their Lamont, California home.

“Right now it’s because of the fire, it’s really really bad,” Diana Mireles said. “Before the fire, it’s all the farming, the refinery, the freeways … the dairies especially, the smell.” The health impact of wildfire exposure depends in part on the fire itself and how much smoke a person breathes in, how often, and for how long. (AP Photo/Noah Berger)

The High Cost of Keeping Cool

Dora Hernandez-Jara, a 71-year-old retired teacher and community organizer in La Colonia south of Shafter, relies on an evaporative cooling system, which sucks in outside air in order to cool it.

“Yesterday I had such a hard time breathing, it was really bad,” Hernandez-Jara said. “I thought, oh my god, I have to turn off the cooler.”

In addition, she lives with dust from nearby almond harvests and fumes from dairies, diesel trucks, and oil and gas operations. Jose Mireles, shown with his wife Diana, has several health conditions that make him sensitive to heat. Because of the coronavirus, they are reluctant to leave home. Photo courtesy of Diana Mireles

“First I have to worry about being able to breathe, because I can’t go anywhere to breathe if I’m not even safe in my own home because all of that stuff is being sucked in,” she said. “If I don’t turn on the cooler, then it’s having to deal with the heat … I think we’re just screwed over.”

Running the cooling system constantly is expensive, and Hernandez-Jara is on a fixed income. She estimates she’s about two months behind on her electricity bill. In the past, she said, she might have visited the cooling center in Shafter, the library, or her son’s house. But now, she’s reluctant to go.

“I don’t really want to go anywhere else where I don’t know where people have been,” she said. “It’s kind of just stuck, you know? Really isolated.”

Thirty miles southeast in Lamont, the Mireles have conventional air conditioning — but their insufficiently insulated house fails to contain the cold air. The couple are on a fixed income from Social Security disability payments after Jose had a stroke seven years ago that weakened the left side of his body, and Diana took on full-time caregiving.

They’re caught in a terrible choice: They must keep Jose Mireles cool because his health conditions —  which include kidney failure and diabetes — leave him sensitive to heat. But he’s also at greater risk from the coronavirus, which makes him reluctant to leave the house.

They used to visit their daughter’s cooler home a couple times a week, but, because of the pandemic, they’re now braving it only once a month. To run the air conditioner non-stop, they’re cutting back on groceries.

Even though the California Public Utilities Commission has suspended power shutoffs for non-payment, Jose Mireles doesn’t like to skip payments: he relies on daily peritoneal dialysis for his kidneys that needs electricity. He doesn’t want to run the risk of a shutoff.

“What I use of electricity, I still have to pay. So it’s going to even make it harder on us trying to get caught up,” he said.

The Mireles are taking a stand against their community’s dirty air with Comite Progreso de Lamont, where Diana is the treasurer. The group has sued for improved air monitoring of the nearby oil refinery.

Still, the barrage of heat, smog and the anxiety and isolation of the coronavirus are getting to Jose. “Sometimes I tell my wife I’m going to throw in the towel on this, let it be what it’s going to be,” he said. “But she says no — she has worked a lot to keep me healthy.”

For the fire evacuees, the non-stop onslaught has them wondering what else California could throw at them. Kelli Mummert evacuated her family from their Vacaville home at 3 a.m. in a camper still packed from a weekend trip. Two of her boys zoomed around the evacuation shelter’s smoky parking lot on bikes, yelling, “The sun is red! The sun is red!”

Mummert’s mother brushed ash from her hair. The generator powering the camper and its air conditioning hummed behind them.

“The next thing that’s coming is a sharknado,” Mummert said. “We decided a sharknado’s next.”