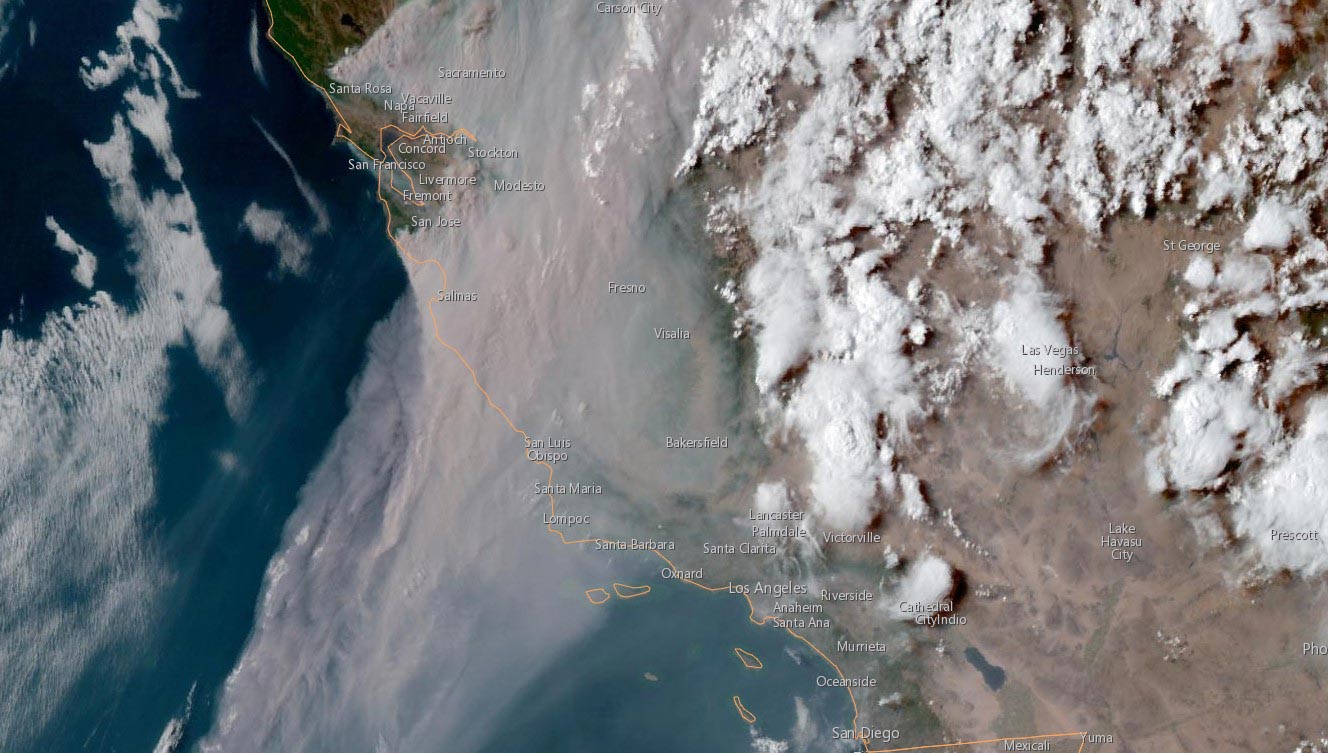 As crews battle 367 wildfires in heatwave-baked California, the satellite view from above shows a state enveloped in smoke.

On the ground, firefighters are doing their best to contain the blazes — many of them ignited by nearly 11,000 lightning strikes during a 72-hour period.

Strong winds are spreading some of the fires, as well as the smoke that is darkening skies, dropping soot, and making the sun look like something from a sci-fi movie.

Bay Area Air Is Some of the Worst in the World

As bad as the air is in Fresno, it’s worse in parts of the Bay Area, which customarily enjoys clear air scoured by ocean breezes.

With wildfires burning north, east, and south of San Francisco, the air quality index there on Wednesday among the worst in the world, KQED reported.

To compare the Bay Area’s air quality to that in the Valley today, click on this link.

2020 in a single remarkable photo

Because of the wildfires, the Valley Air District has issued a health caution. And, district officials are advising residents to reduce exposure to particulate matter emissions by staying indoors.

“PM pollution can trigger asthma attacks, aggravate chronic bronchitis, and increase the risk of heart attack and stroke,” the district said in a news release. “Anyone experiencing poor air quality due to wildfire smoke should move indoors, to a filtered, air-conditioned environment with windows closed.”

District officials also advise that common cloth and paper masks people are wearing because of COVID-19 “may not protect them from wildfire smoke.” A wildfire in Del Puerto Canyon near Patterson in the north Valley is contributing to Fresno area smoke. That fire is part of the SCU Lightning Complex series of fires.

Vollmer explained that embers are shooting up to three-quarters of a mile, and the fire is spreading by 120 feet a minute.

“The first is moving faster than we can safely engage it,” Vollmer said in a Twitter video.

“Air pollution and all type of particulate matter, but especially the particulate 2.5 that we see in fires, can really impact both lung health as well as just general immune health,” Dandu said. “One of the things that it does is destroy these little hairs that we call cilia that are in the lungs, which are ways to protect the lungs. They basically wipe off the germs, or spread off the germs, so that they don’t eventually get into the bloodstream.”

The air district’s Real-time Air Advisory Network tracks air quality throughout the Valley. Click on this link to access it.

In addition, anyone can follow air quality conditions by downloading the free “Valley Air” app on a mobile device.

Another resource is the airnow.gov/fires page. The proclamation enables local livestock owners to work with health and agriculture officials to determine alternatives for the safe disposal of livestock carcasses, the county said in a news release.

Officials said the number of carcasses during the heatwave has exceeded the capacity of the Baker Commodities, Inc. rendering facilities. The plant processes dead livestock for a majority of dairies and ranches in the Central Valley.

Thousands of Chicks Dead on Arrival After Post Office Cuts