Pacific Gas & Electric officials rolled out a mission Monday — conserve energy to avoid rolling blackouts — and residents throughout the utility’s service area carried it out.

Now, the question is: Will residents save enough juice to avoid rotating power outages Tuesday evening?

“Voluntary reductions in usage have so far kept California utilities from having to implement rolling outages today,” a PG&E official said.

During a Flex Alert, residents are asked to voluntarily reduce electricity usage so that Cal-ISO doesn’t have to order rolling blackouts.

At noon, PG&E warned that rotating blackouts were “likely to occur” later in the day.

How to See If Your House Will Go Dark

You can follow the state’s electricity supply, current demand, and expected peak demand in real-time at this link.

In addition, PG&E customers can look up their address to determine if their household will be affected. Visit www.pge.com/rotatingoutages to check your address.

Watch: How to Check Your Address for Rolling Blackouts

What Is a Flex Alert?

A statewide Flex Alert is in effect from 3 p.m. to 10 p.m. through at least Wednesday.

During a Flex Alert, residents are asked to voluntarily reduce electricity usage so that Cal-ISO, the electricity grid operator, doesn’t have to order rolling one- or two-hour blackouts.

“We’re doing laundry and dishes during the day, turning off lights where they’re not needed, and keeping blinds and curtains closed. Instead of turning on the oven, which warms the house, I’m  cooking at night outside on a gas grill.” — PG&E spokesman Denny Boyles, on how he’s cutting electricity use while sheltering in place

Boyles’ No. 1 tip for residents is to bump up their thermostat during Flex Alert hours. He also explained what he’s doing at his house to cut electricity consumption between 3 p.m. and 10 p.m.

“We’re doing laundry and dishes during the day, turning off lights where they’re not needed, and keeping blinds and curtains closed,” said Boyles, who is working at home during the COVID-19 pandemic. “Instead of turning on the oven, which warms the house, I’m  cooking at night outside on a gas grill.” 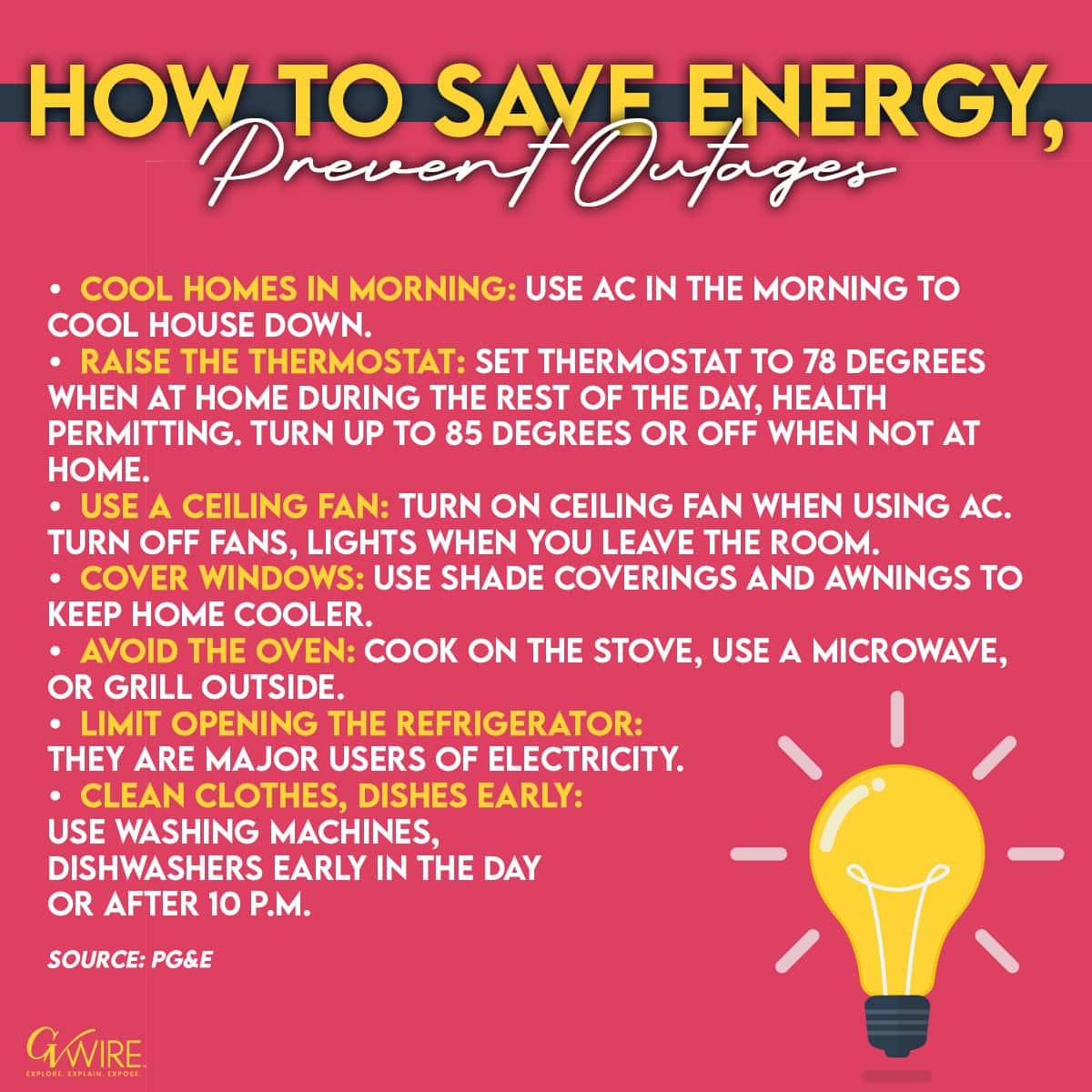 As for the heatwave, it’s not going anywhere soon.

Here’s a running tally of triple digit temperatures so far at select airports in the San Joaquin Valley.#cawx pic.twitter.com/nOADUT2d4c

The Weather Channel forecast calls for triple-digit temperatures through Sunday, Aug. 30, and the Excessive Heat Warning from the National Weather Service Hanford will remain in effect through Thursday evening.

Tuesday’s high temperature in Fresno is predicted to be 110 degrees, and Wednesday’s forecast calls for 109. A drop to 103 Thursday and Friday is expected followed by weekend temperatures of 106.

NWS Hanford tweeted Tuesday that Fresno has had 43 days this summer with temperatures of 100 degrees or higher. On 10 of those days, the thermometer hit at least 105 — topped by Sunday’s 112. 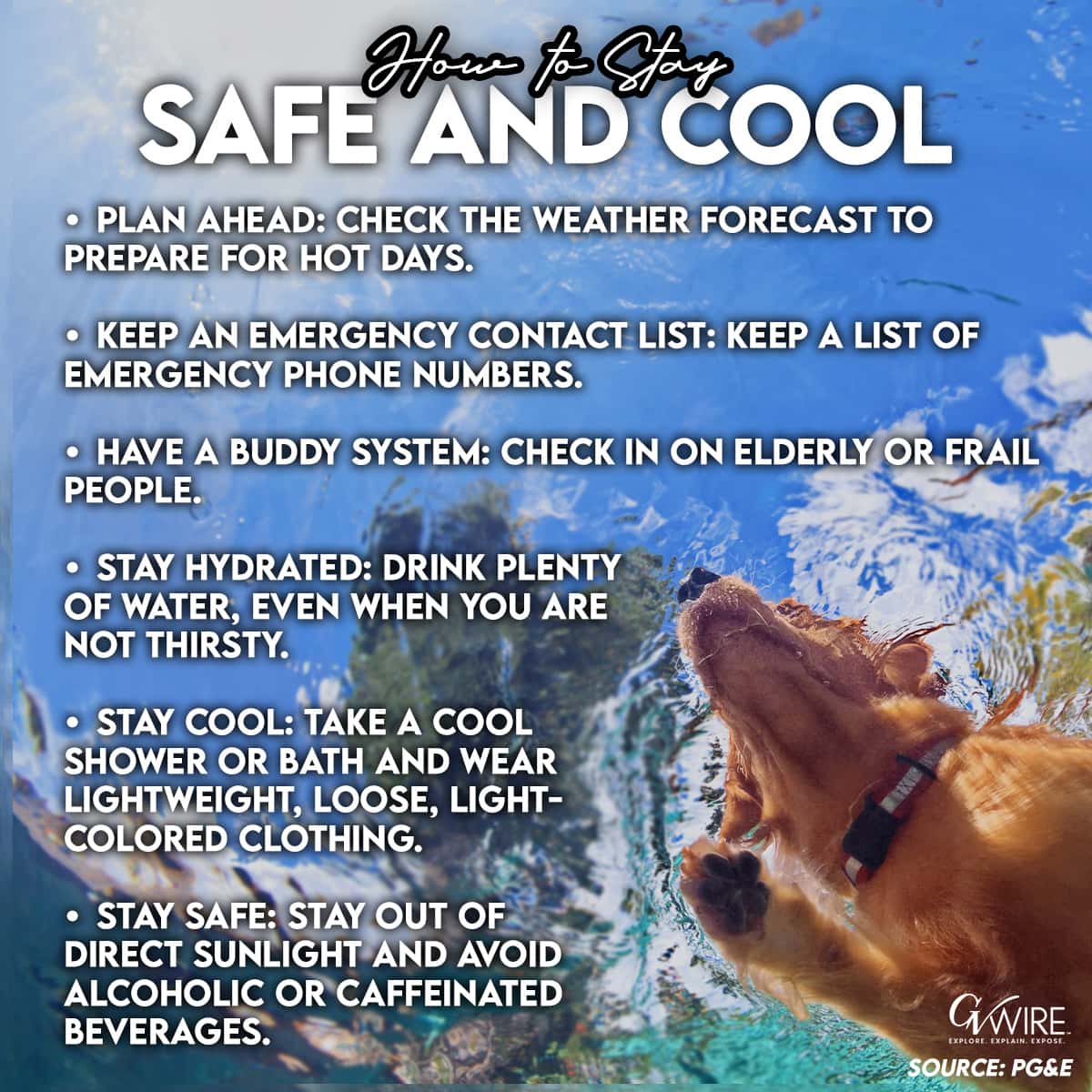