CLEVELAND — President Donald Trump billed his trip to Ohio Thursday as a chance to promote economic recovery, but he quickly pivoted to a deeply personal attack on Joe Biden, even questioning without foundation the former vice president’s faith in God.

Even for a president known for his blunt criticism, Trump’s remarks stood out and they signaled how contentious the campaign may get over the coming months.

“He’s following the radical left agenda, take away your guns, destroy your 2nd Amendment, no religion, no anything, hurt the Bible, hurt God. He’s against God. He’s against guns. He’s against energy, our kind of energy. I don’t think he’s going to do too well in Ohio.” — President Donald Trump

Biden called the remarks beneath the office he holds. “For President Trump to attack my faith is shameful,” Biden said.

Trump also used his trip to Ohio to talk trade, telling workers at a Whirlpool plant, “I will stand up to the foreign trade cheaters and violators that hate our country.”

Barely one month after a new North America trade agreement went into effect, Trump announced his intention to reimpose 10% tariffs on aluminum imported from Canada, saying that United States Trade Representative Robert Lighthizer has advised him the step was necessary to defend the U.S. aluminum industry. However, the move also sets up the possibility of retaliation against U.S. companies and producers.

“Canada was taking advantage of us as usual,” Trump said.

The administration said the president had exempted Canada last year from tariffs he had imposed as long as imports of steel and aluminum from Canada remained at historical levels. But there has been a surge that has intensified in recent months despite a contraction in U.S. demand. 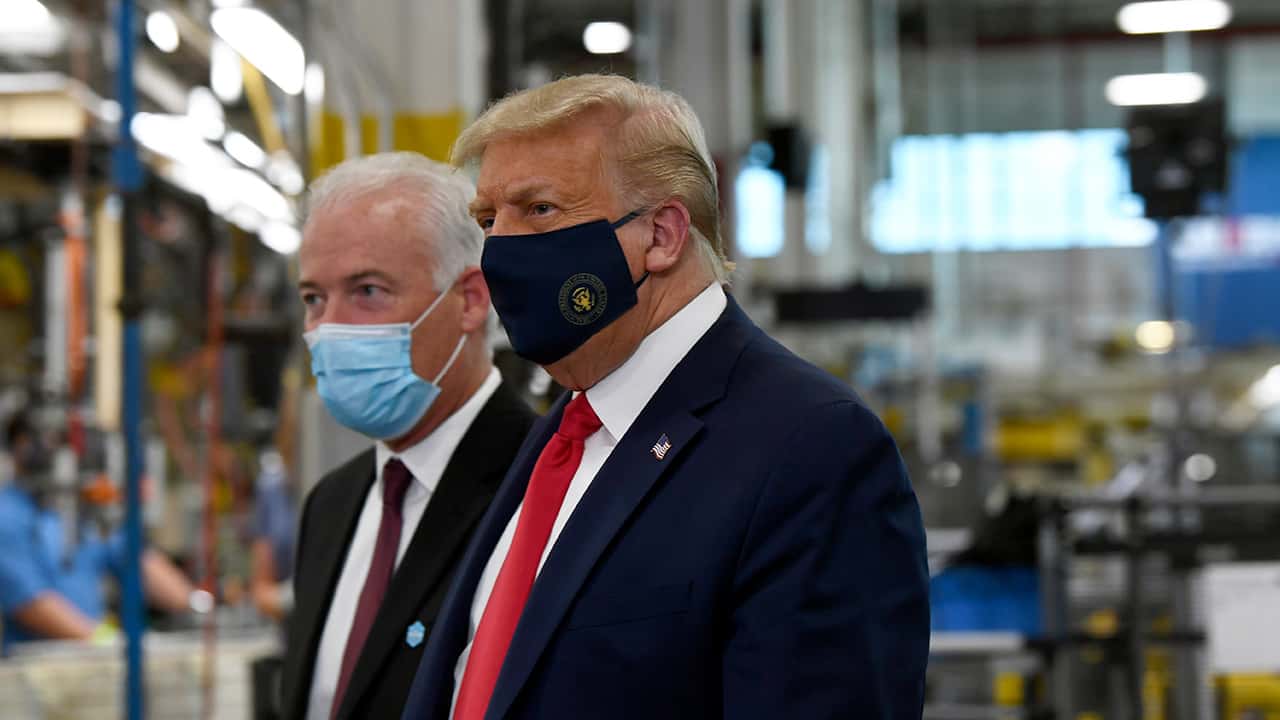 President Donald Trump wears a mask as he gets a tour of the Whirlpool Corporation facility from Jim Keppler, Vice President, Integrated Supply Chain and Quality, Whirlpool Corporation in Clyde, Ohio, Thursday, Aug. 6, 2020. Trump is in Ohio to promote the economic prosperity that much of the nation enjoyed before the coronavirus pandemic and try to make the case that he is best suited to rebuild a crippled economy. (AP Photo/Susan Walsh)

The Virus Already Altered the Trip Even Before Trump Landed

Trump also sought to remind voters of the economic prosperity that much of the nation enjoyed before the coronavirus pandemic and said that he is best suited to rebuild a crippled economy. But his handling of the outbreak has weakened his bid for a second term, causing Trump to spend time and resources in a state he won easily in 2016 but now could be in danger of slipping away.

The virus already altered the trip even before Trump landed, with word that GOP Gov. Mike DeWine had tested positive for the coronavirus. DeWine had planned to meet with Trump and join the president on a visit to the Whirlpool Corp. plant in northwest Ohio. DeWine’s office said the 73-year-old governor had no symptoms and was returning to Columbus; later, it said a second COVID-19 test on the governor turned up negative.

Shortly after landing in Ohio, Trump addressed supporters awaiting him. It was at that event where he veered from his economic message and attacked Biden personally.

Biden’s campaign issued a statement from the former vice president in which he said his faith has been the bedrock foundation of his life and provided him comfort in moments of loss and tragedy.

“Like the words of so many other insecure bullies, President Trump’s comments reveal more about him than they do about anyone else,” Biden said. “They show us a man willing to stoop to any low for political gain, and someone whose actions are completely at odds with the values and teachings that he professes to believe in.”

He Promised a Manufacturing Renaissance, but That Has Failed to Materialize

For Trump, the Ohio trip kicked off a long weekend of fundraising that comes as Biden has chipped away at Trump’s financial advantage with the race entering its final three months.

When Trump swept through the region in 2016, his economic populism argument was one of the factors that led him to narrowly capture Michigan, Wisconsin and Pennsylvania. He handily won Ohio, which had been a swing state for decades, by eight percentage points.

The virus upended Trump’s plan to run on the back of a strong economy, and Biden has charged that the president has pushed to reopen states too soon in hopes of jump-starting the markets and lifting his standing in the polls. But several states have had to slow down the pace of their reopening, and officials are warily watching a rise in coronavirus cases in the Midwest, including Ohio.

When Trump swept through the region in 2016, his economic populism argument was one of the factors that led him to narrowly capture Michigan, Wisconsin and Pennsylvania. He handily won Ohio, which had been a swing state for decades, by eight percentage points.

He promised a manufacturing renaissance, but that has failed to materialize. Manufacturers added jobs during the first two years of his presidency, but the gains effectively stalled in 2019 as industrial Midwestern states such as Michigan and Ohio began to shed factory workers.

The import taxes charged by his administration hampered manufacturing companies’ supply lines and created uncertainty. The economy had roughly 12.85 million factory jobs at the start of the election year, compared with the 14 million before the 2008 financial crisis, according to the Bureau of Labor Statistics.

The pandemic only compounded the pain. Manufacturers cut 1.36 million jobs between February and April as the economy went on lockdown. Hiring in May and June has pointed to a slight recovery. But even if factories add 267,500 jobs expected in the July employment report being released Friday, the sector would still have 500,000 fewer jobs than it did before the outbreak. 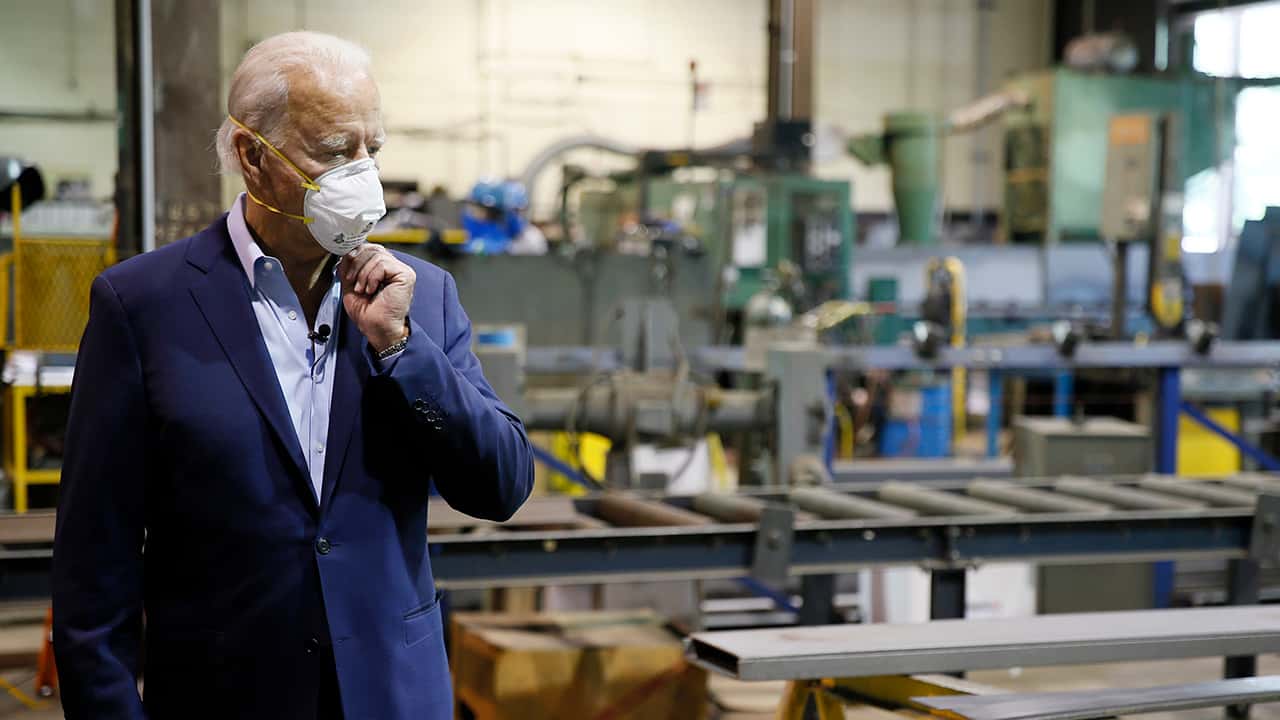 Trump now finds himself severely tested in battleground states, and campaign aides have privately all but written off Michigan. The president now has been forced to spend time in states that his campaign once thought he had locked up. The Ohio trip comes a week after he visited once deeply Republican Texas.

“We’re going to win Ohio by even more this time,” Trump claimed.

The administration has long looked to reduce U.S. dependency on drugs made overseas, particularly in China. The new order invokes the Defense Production Act to procure essential medicines and other equipment from the United States, but does not stipulate precisely which drugs would fall under the requirements.

Trump has said he wants to prepare for future pandemics by replenishing the national stockpile and bringing manufacturing of critical supplies and equipment back to the U.S. His critics have suggested that his administration was woefully unprepared for coronavirus, which has killed more than 157,000 Americans, and that Trump has faltered in mobilizing the nation’s resources to battle the virus.

After his trip to Ohio, Trump plans a long weekend at his golf club in Bedminster, New Jersey, with a high-dollar fundraiser in the Hamptons on New York’s Long Island and a second near the Jersey shore.