The state is cracking down on Atwater, which attracted national attention when it declared itself a “sanctuary city” for businesses amid the COVID-19 pandemic in mid-May.

On Thursday night, the state notified Atwater officials that the city is ineligible for $389,000 in state assistance to deal with the coronavirus.

Atwater’s first Coronavirus Relief Fund allocation of $64,833 will be withheld “until the city rescinds its resolution and complies with state public health orders,” said Brian Ferguson, a deputy director with California’s Office of Emergency Services.

Funds Withheld From Coalinga, Too

In addition, officials in Coalinga were notified Thursday night that the city won’t receive $216,000 in CRF funding until it complies with state directives. Coalinga’s first allocation is $36,000. The Coalinga City Council passed a resolution declaring all businesses “essential” and therefore not subject to state public health orders in May.

“The state remains optimistic that these cities will do what is right to protect public health and safety in their communities and will move expeditiously to rescind their resolutions,” Ferguson said.

When the Legislature passed the budget signed by Gov. Gavin Newsom last month, the budget included provisions requiring local governments to adhere to COVID-19 public health orders to be eligible for state funding.

Officials in Atwater voted unanimously not to enforce the then nearly 2-month-old state shelter-at-home orders intended to slow the spread of the coronavirus. At that time, they made it clear the city wouldn’t interfere with any business or church that decided to reopen ahead of state restrictions.

However, Atwater Mayor Paul Creighton cautioned that businesses were taking their own risks by reopening.

“If you do have a state (business) license, that’s between you and the state of California,” Creighton told the Merced Sun-Star.

Open at Your Own Risk

On May 7, the Coalinga City Council passed a resolution on a 4-1 vote stating that all businesses were allowed to stay open and operate “for the duration of the local and state emergency” as long as they followed social distance guidelines.

The following day, the Reel Time movie theater in Coalinga opened its doors for the first time since state guidelines classified entertainment venues as non-essential businesses. 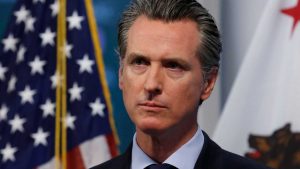 “We have conditioned $2.5 billion in our state budget on applying the spirit and the letter of the law as it relates to health directives at the county level. If local officials are unwilling to enforce and are being dismissive, we will condition the distribution of those dollars. Again, $2.5 billion.” — Gov. Gavin Newsom

Just like in Atwater, city officials informed businesses that they could reopen — at their own risk.

“We’re giving them the freedom to open up on their own, but they know there could be ramifications from the state,” Coalinga City Councilmember Adam Adkisson told ABC30.

At the beginning of July, the state created “strike teams” from 10 state agencies to enforce coronavirus guidelines. Newsom said then that the teams would “go after people that are thumbing their nose, that are particularly being aggressive, reticent to do anything.”

Newsom also said that counties failing to enforce statewide and local orders could lose out on their shares of $2.5 billion in aid.

“We have conditioned $2.5 billion in our state budget on applying the spirit and the letter of the law as it relates to health directives at the county level,” Newsom said. “If local officials are unwilling to enforce and are being dismissive, we will condition the distribution of those dollars. Again, $2.5 billion.”