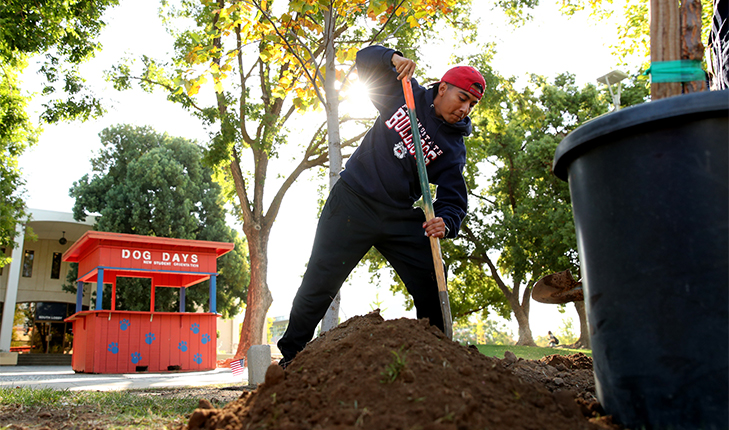 Central Unified’s attempt to bring students back to the classroom for summer school classes turned out to be short-lived — as in, only a week.

The district had carefully marked out spaces and put directional signs in hallways at Tilley Elementary School to prove to Fresno County public health officials that students could safely maintain social distancing while attending school.

Related Story: These Central Unified Kids Will Return to Classroom for Summer School

When the three-week summer school program opened on July 6, only about half of the 220 students who had enrolled showed up, and some parents reported that they kept their kids out of school over concerns about rising rates of COVID-19 infections in the county, district spokeswoman Sonja Dosti said.

A week after summer school opened, area schools officials learned from county health about the risk of reopening schools and the need to maintain 6 feet of distance while wearing masks to lower the risk of infections, she said.

As a result, “we moved our summer school completely online for the remainder of the program to ensure the health and safety of our community, students and staff,” Dosti said.

As of Monday, there were no cases of COVID-19 infection associated with Central Unified’s summer school, which ends Friday, she said.

No In-Person Classes at Fresno Pacific This Fall

Fresno Pacific announced Friday that its fall semester classes will be online after all.

The university had planned for students and faculty to return to classrooms and other campus structures that have been modified with safety protocols for sanitizing and physical separation, and had spent millions of dollars getting campuses ready.

But the university says a state directive prohibits colleges and universities from resuming in-person classes until California reaches stage 3 of recovery from the closures that were ordered in March to slow the spread of the virus.

With the preparations that have already been made, Fresno Pacific will be ready to resume in-person classes as soon as the state restrictions are lifted, the university said.

Fresno State reports that students like Macie Saiz weren’t about to let the coronavirus pandemic get in the way of their community service — although they did have to switch gears.

For the 11th year in a row, according to Fresno State, students, faculty, and staff logged more than 1 million in community service hours. The total for this year was 1.2 million hours, which translates to $38.8 million in estimated economic impact.

For the 11th year in a row, the university reports, students, faculty, and staff logged more than 1 million in community service hours. The total for this year was 1.2 million hours, which translates to $38.8 million in estimated economic impact.

Saiz, a finance major from Fresno who plans to graduate in December, had helped with tax preparation and was preparing to volunteer with a Saturday morning sports program for children when the pandemic hit.

Fresno State’s Mary E. McGarry Student Loan Fund had provided Saiz with a low-interest loan to help cover her college expenses, and a portion or all of the loan can be forgiven if students take a community service course and complete a service project through the Jan and Bud Richter Center for Community Engagement and Service-Learning.

So Saiz turned her attention to developing a resource list of activities — including exercise and fitness, dance, virtual tours, games, and cooking — for people sheltering in place.

Students Say They Like Guardians Mascot for New High School

Central Unified students are getting a voice in what the mascot of their new high school at Grantland and Ashlan avenues west of Highway 99 will be called.

And unless the School Board disagrees at Tuesday night’s board meeting, students will root for the Justin Garza High School Guardians in years to come.

In the initial survey, which was conducted in May and garnered 621 student responses, students showed a clear preference for the Navy blue-red-white-silver school colors but were less certain about the mascot name. Between the first and second surveys, the Central Unified School Board voted to name the high school for Garza, the former Central High football coach who lost his battle with cancer in 2017.

Knowing the name of the high school, which is scheduled to open in August 2021, gave students something to tie to a mascot name when making their choice known.

Meltdown Over Social Distancing Caught on Camera at Bass Lake