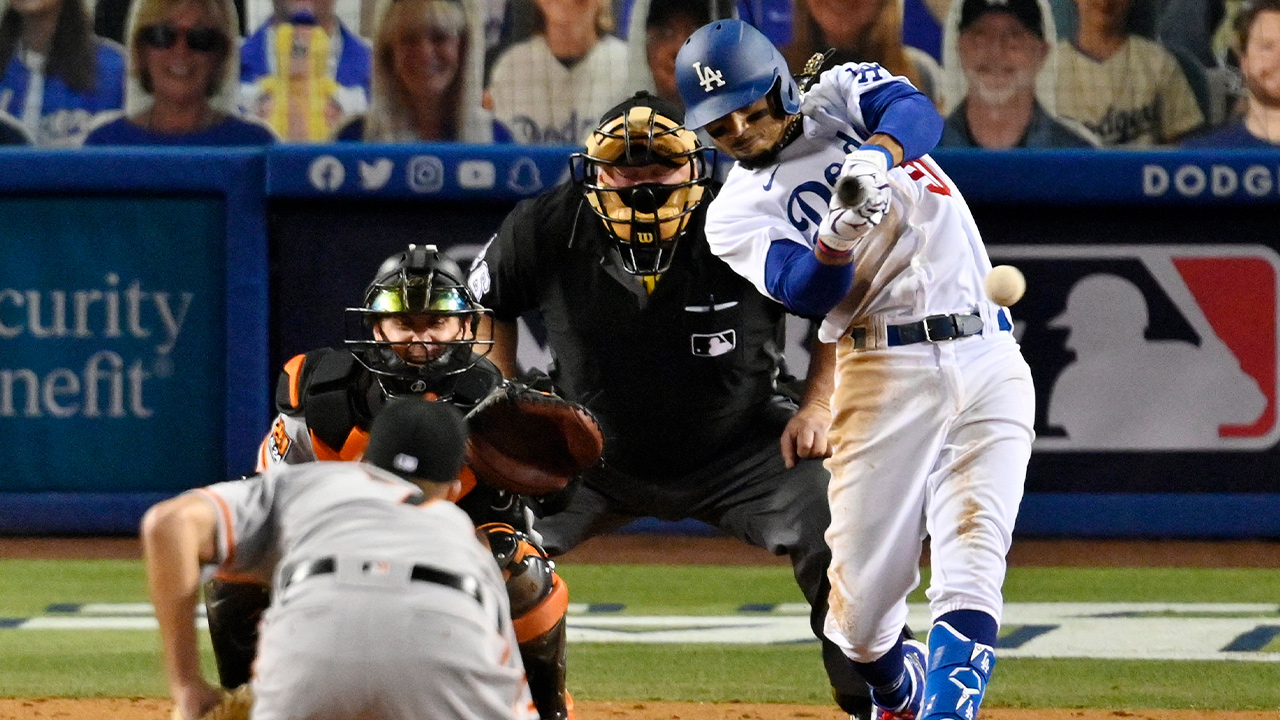 LOS ANGELES — Mookie Betts singled in the seventh inning for his first hit as a Los Angeles Dodger, then signaled for the ball.
That, along with the lineup card, is headed for a display in his house.
“This is something I’ll always remember,” he said Thursday night after scoring the go-ahead run in an 8-1 opening victory over the San Francisco Giants in a fan-less stadium. “It’s just a new chapter in life.”
Betts went 1 for 5 with two strikeouts, a day after signing a $365 million contract covering 2021-32.
Betts spoke without his bat when he kneeled during the national anthem. Teammates Cody Bellinger and Max Muncy stood resting a hand on each of his shoulders. Giants manager Gabe Kapler, in his first game as Bruce Bochy’s successor, kneeled, too.
“It was just unity,” Betts said. “We’re all on the same team, we’re all here for change, even the Giants.”
Betts’ perspective on kneeling has changed since 2016, when he said he wouldn’t take such action. His father, Willie, served in Vietnam with the U.S. Air Force.
“I wasn’t educated, and that’s my fault,” Betts said. “I know my dad served and I’ll never disrespect the flag, but there also has to be change. Kneeling is for the injustice.”
Kiké Hernández homered and drove in five runs while tying his career high with four hits for Los Angeles.
“It’s a great feeling,” he said.

Rookie Dustin May Started on the Hill for Dodgers

Justin Turner grounded into a fielder’s choice and Betts beat second baseman Donovan Solano’s throw to the plate to give the Dodgers a 2-1 lead in the seventh. The Giants lost their video challenge of the call after Betts slid head-first.
“If that out is recorded at the plate, I think we’re talking about a much different game,” Kapler said.
Betts struck out with the bases loaded, ending a five-run inning that made it 6-1.
Adam Kolarek (1-0) got the victory with 1 2/3 innings of relief.
Dustin May became the first Dodgers rookie to start on opening day since Fernando Valenzuela in 1981 after Clayton Kershaw went on the injured list because of a back issue. It was similar to when Valenzuela was a late replacement for the injured Jerry Reuss back then.
“He kept his composure,” Hernández said. “He wasn’t nervous or intimidated by the amount of cardboards we had in the stands.”
May allowed one run and seven hits in 4 1/3 innings. The 6-foot-6 right-hander struck out four and walked none. 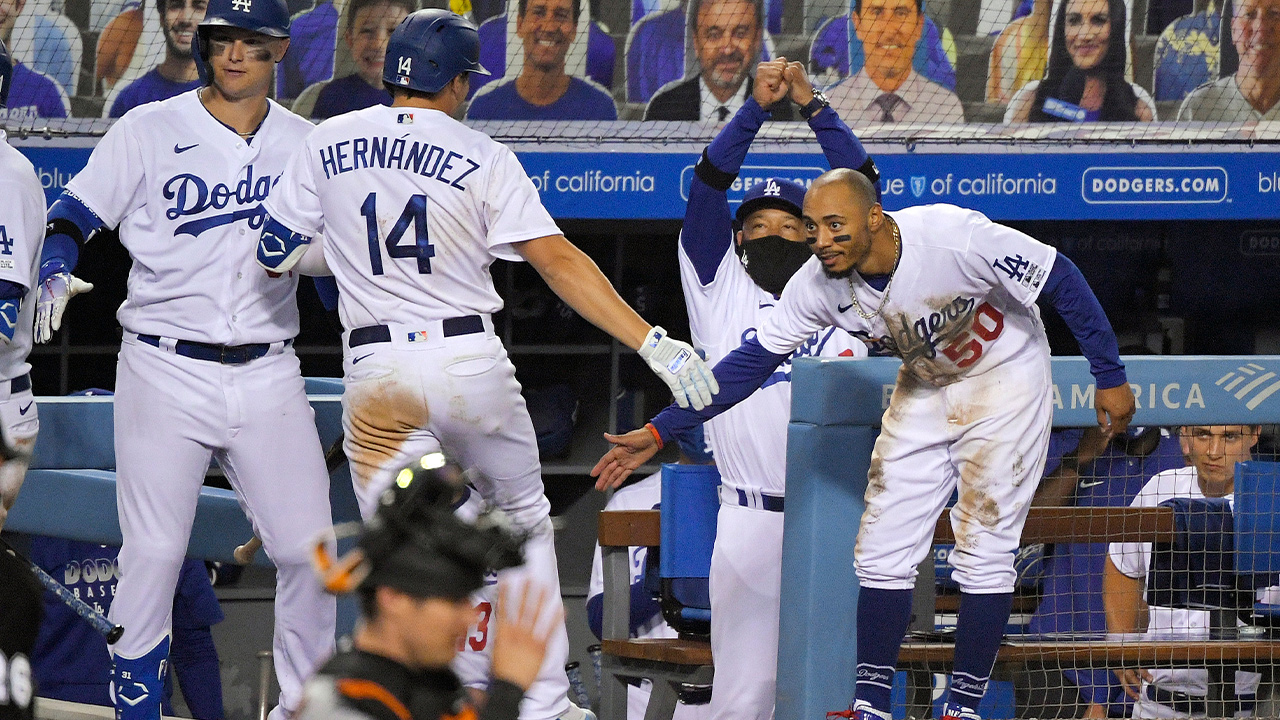 “It’s the kind of thing you dream about, throwing on opening day,” May said. “Once the first pitch was thrown I was all good and ready to get going.”
May originally was not on the 30-man active roster, and the 22-year-old found himself pressed into duty after Kershaw’s back stiffened during a weight room workout on Tuesday.
Pablo Sandoval’s sacrifice fly scored San Francisco’s lone run. Tyler Rogers (0-1) took the loss.
The sounds of the game were amplified with only cardboard cutouts of fans in areas of the stands.: The crack of the bat on a sharply hit ball. The DJ’s music echoing. Foul balls clunking loudly upon landing in the seats. The home plate umpire’s third-strike calls easily heard. Teammates yelled reminders to Dodgers left fielder Joc Pederson about which base to throw to after he snagged a fly ball in the second.
Giants starter Johnny Cueto allowed one run and five hits over four innings.

The Giants and Dodgers held a black ribbon that wound along the baselines in a show of unity after pregame introductions. Anthem singer Keith Williams Jr. stood in the new center field seating to perform instead of the usual spot near home plate. Some of the Giants kneeled during the performance. Reliever Sam Coonrod chose not to join his teammates, saying that he found out about his teammates’ plan just beforehand. “I meant no ill will by it. I don’t think I’m better than anyone,” Coonrod said. “I’m a Christian, so I just believe that I can’t kneel before anything besides God.” In a video, 98-year-old Rachel Robinson, whose husband, Jackie, broke the major league color barrier in 1947, gave the traditional call of “It’s time for Dodger baseball!” 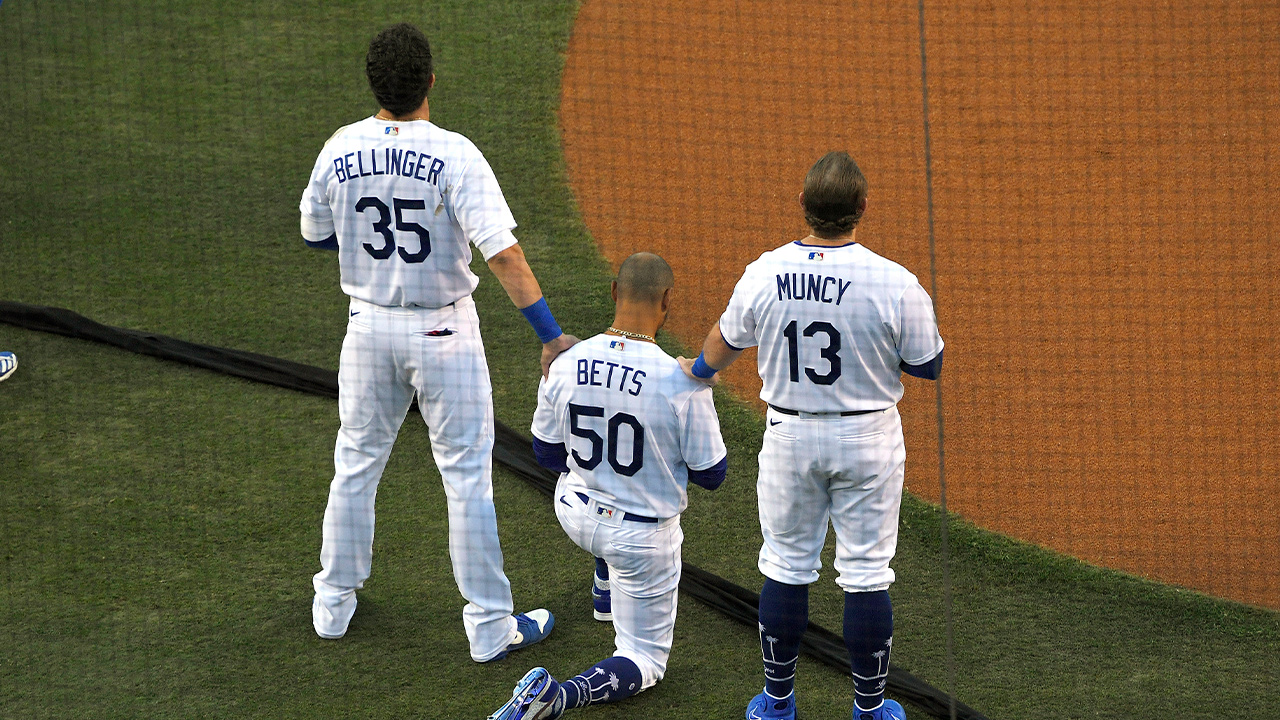 A Mylar balloon floated down near second base in the later innings, seemingly appearing out of nowhere. A ball boy came on the field and snatched it during a brief pause in the action.

Dodgers scout Mike Brito has his own cutout behind home plate. The 85-year-old, who discovered Valenzuela, is wearing his traditional Panama hat, chomping a cigar and holding a radar gun. He’s positioned in the aisle with former “Entertainment Tonight” host Mary Hart in her seat next to him.

Giants: 1B Brandon Belt and 3B Evan Longoria are starting the season on the injured list.
Dodgers: Joining Kershaw on the IL are C Keibert Ruiz and RHP Scott Alexander.

The Giants did not announce a starter for Friday night. RHP Ross Stripling goes for the Dodgers, replacing David Price in the rotation after Price opted out of the season. He was 2-3 with a 3.60 ERA as a starter last year.

Giants' Alyssa Nakken Proved Herself Ready to Coach on Field