MITO, Japan — A return of stringent coronavirus restrictions in Israel, another daily record of reported cases in Japan’s capital and outbreaks in remote areas such as China’s Xinjiang region underscored Friday the ongoing battle to quash COVID-19 flare-ups as the world’s latest hot spots pushed the confirmed global case tally toward 14 million.

India said the country’s total confirmed cases surpassed 1 million, the third-highest number behind the United States and Brazil, and its death toll reached more than 25,000. That followed Brazil’s announcement Thursday evening that its confirmed cases exceeded 2 million, including 76,000 deaths.

India said the country’s total confirmed cases surpassed 1 million, the third-highest number behind the United States and Brazil, and its death toll reached more than 25,000. That followed Brazil’s announcement Thursday evening that its confirmed cases exceeded 2 million, including 76,000 deaths.

Governments are frantically trying to prevent and put down fresh outbreaks and keep their economies running as the pandemic accelerates in some parts of the world and threatens to come roaring back in others. Worldwide, confirmed cases numbered more than 13.8 million Friday and COVID-19 deaths totaled more than 590,000.

Stores, malls, barber shops, beauty salons, beaches and tourist sites will also be closed on weekends. Public gatherings will be limited to 10 people indoors or 20 outside.

New virus cases have soared in Israel since restrictions were lifted in late May. The country reported around 1,900 new cases on Thursday. At least 384 people have died since the outbreak began.

Japan’s capital recorded a single-day record number of new coronavirus cases for a second straight day on Friday with 293. Tokyo was taken off a list of places around the country where discounts are offered under a government scheme to encourage domestic tourism.

Like elsewhere around the world, the recent infections have triggered concerns that the government moved to ramp up the Japanese economy too quickly. Many governments — national, regional and local – have been rolling back reopenings and tightening restrictions to try to stave off more waves of new cases.

Spain, which earlier in the pandemic was one of the world’s hardest hit countries, was grappling with more than 150 active outbreaks, most of them in the northern Aragon and Catalonia regions. Health authorities on Friday asked the 5.5 million residents of Barcelona, the regional capital of Catalonia, to stay at home as much as possible to stem the virus’ spread. 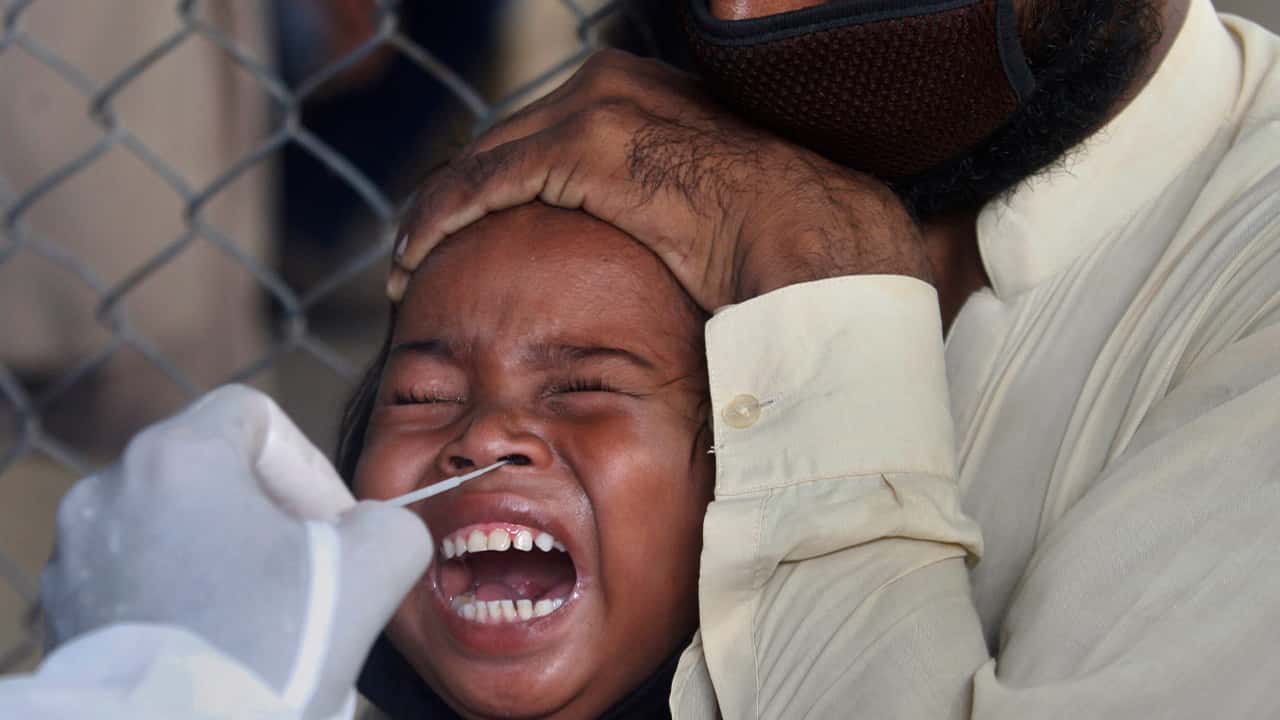 A girl reacts while getting a nasal swab sample at a testing and screening facility for the new coronavirus in a hospital in Karachi, Pakistan, Friday, July 17, 2020. (AP Photo/Fareed Khan)

They also announced a local ban on social gatherings over 10 people, and nightclub and gym closures. Spain reported 580 new cases Thursday, the highest daily number since May 10.

Australia’s most populous state, New South Wales, on Friday announced increased pandemic restrictions after detecting eight new COVID-19 cases in a cluster that began in a Sydney pub and was traced to a visitor from Melbourne. Around 42 cases have since been linked to that cluster.

Authorities were hoping that fresh controls might bring the infection count to a plateau, as Melbourne reported a record 428 new COVID-19 cases on Friday.

British Prime Minister Boris Johnson charted a different course, announcing that the government was no longer asking people to avoid public transit and that as of Aug. 1 would stop advising workers in England to work from home.

Keen to reinvigorate the economy, Johnson wants to see struggling businesses that rely on office workers to rebound. He also announced that beauticians, casinos, bowling alleys and skating rinks would be allowed to reopen next month as long as infection rates don’t start climbing again.

The prime minister’s decision to give employers more leeway to ask their staffs to return to regular work locations appeared to conflict with the views of his chief scientific adviser, who said Thursday that there was “absolutely no reason” to change the work-from-home advice.

The U.K.’s official pandemic death toll, which stood at more than 45,000 as of Friday, has for several weeks been the highest in Europe and the third-highest in the world behind the United States and Brazil.

China, where the coronavirus first emerged late last year, on Friday reported nine imported cases. Health officials in the Muslim northwestern region of Xinjiang also reported six confirmed cases of local transmission. They said another 11 people tested positive but were asymptomatic. China does not include asymptomatic cases in its caseload totals. 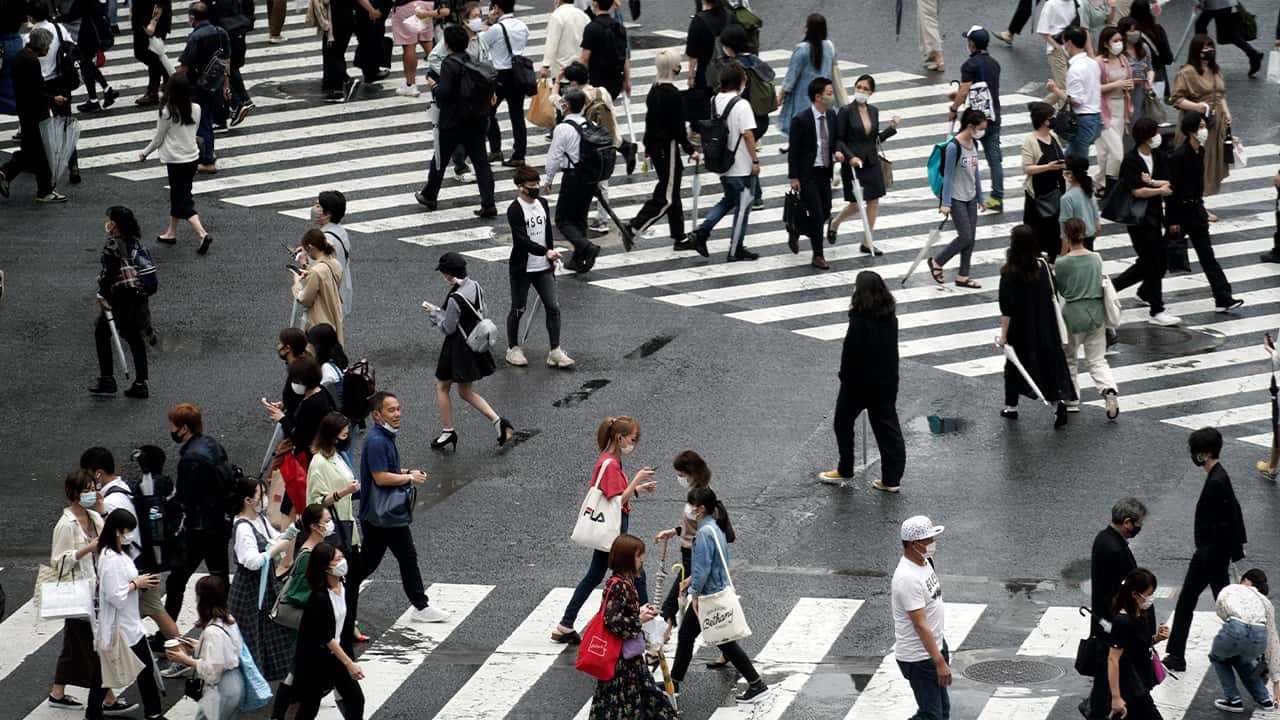 Xiniang, where Chinese authorities have been accused of mass detentions and other human rights abuses against ethnic Muslims, is so far from Beijing that residents operate by their own, unofficial time zone. Until now, the region had been little affected by virus outbreaks elsewhere that have since appeared to be under control.

The continuing surge of new cases in India drove home concerns over the readiness of some countries to cope with outbreaks that could overwhelm hospitals and test feeble health care systems. The government ordered a weeklong lockdown in the technology hub of Bangalore after confirmed cases there increased exponentially.

The continuing surge of new cases in India drove home concerns over the readiness of some countries to cope with outbreaks that could overwhelm hospitals and test feeble health care systems. The government ordered a weeklong lockdown in the technology hub of Bangalore after confirmed cases there increased exponentially.

“The acceleration in cases remains the main challenge for India in the coming days,” said Dr. Ashish Jha, director of the Harvard Global Health Institute, adding that a vast majority of cases were still being missed.

South Africa now has the world’s sixth-highest reported caseload, with 324,221 cases accounting for more than half the total confirmed in Africa. Many are clustered in South Africa’s densely populated Gauteng province, home of Johannesburg and one-quarter of the country’s population.

Meanwhile, the coronavirus deluge in parts of the United States produced more record numbers of confirmed infections and deaths in the South and West.

Hospitals are stretched to the brink in many areas amid fears that outbreaks were only getting started. At least half of the 50 states have adopted requirements for wearing masks or other facial coverings.

Texas reported 10,000 new cases for the third straight day and 129 additional deaths. A third of its more than 3,400 total COVID-19 fatalities came in the first two weeks of July alone.

Florida reached another ominous record, with 156 virus deaths, and a staggering 13,965 new cases.