Gov. Gavin Newsom on Monday widened the list of businesses that must shut down indoor operations in counties on the state’s COVID-19 monitoring list, which includes Fresno and other Valley counties.

The governor announced the move in a live news conference from Sacramento. The order is effective immediately, Newsom said.

In addition to Fresno, counties on the state’s COVID watchlist include Kern, Kings, Madera, Merced, Stanislaus and Tulare.

In all, 30 of California’s 58 counties are included on the watch list. The new order affects about 80% of the state’s population.

All Bars in California Must Close

The governor also said bars across the state must immediately close all operations.

Newsom on Monday expanded his July 1 order prohibiting indoor dining to the entire state. Previously, only those counties on the monitoring list were affected.

That indoor shut down order also applies to wineries, zoos and family entertainment centers like bowling alleys and miniature golf.

California confirmed 8,358 new coronavirus cases on Sunday. Cases have increased 47% over the past two weeks, while hospitalizations have jumped 28% during the same time period.

“The data suggests not everybody is practicing common sense,” Newsom said.

Overall, California has reported more than 329,100 cases and more than 7,000 deaths, though infections are probably higher because some people don’t show symptoms and there’s a lack of testing. 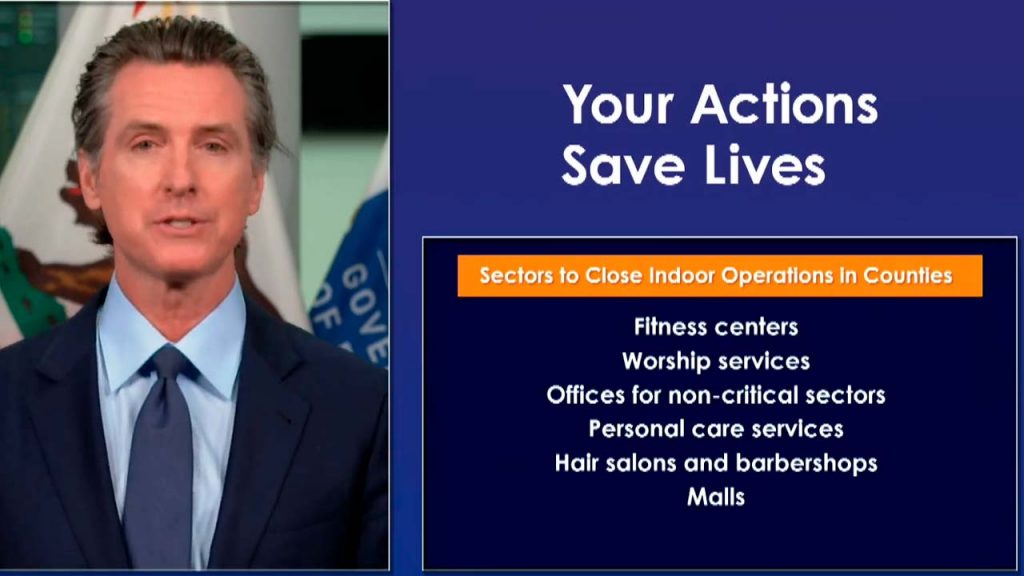