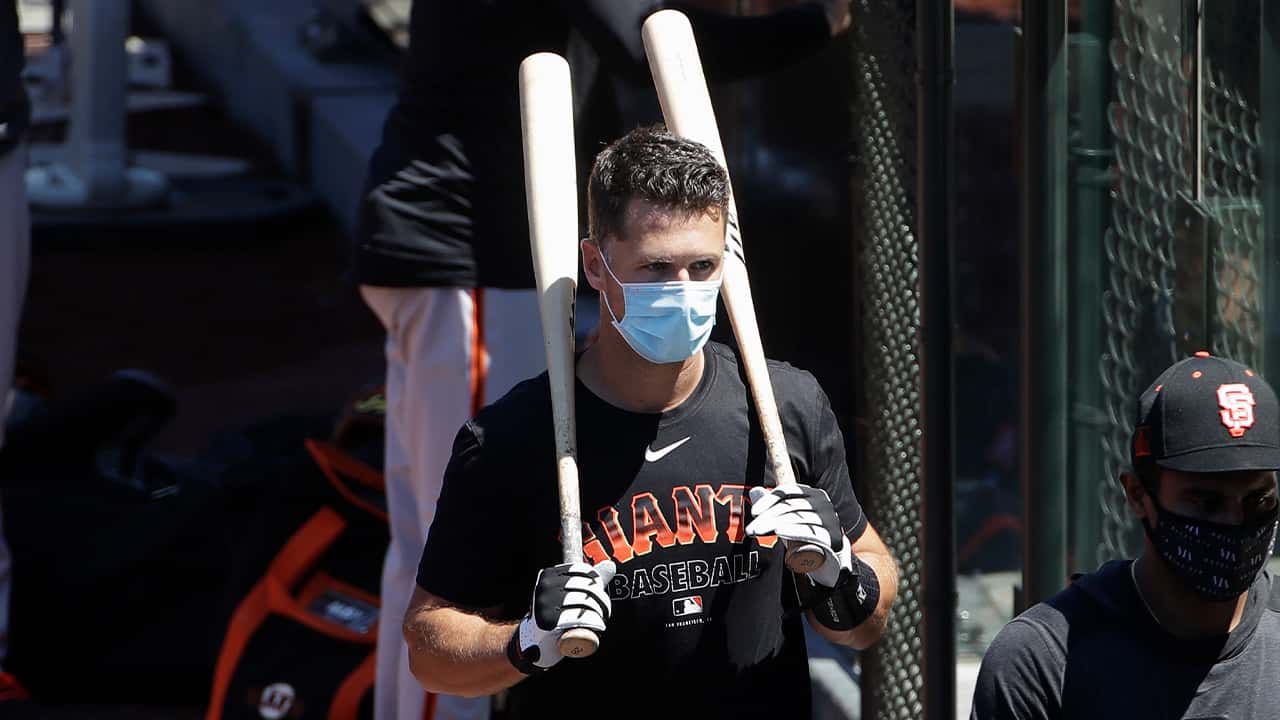 SAN FRANCISCO — Giants star catcher Buster Posey decided to opt out of the 2020 season Friday out of health concerns for his newly adopted twin baby girls during the coronavirus pandemic.
The babies were born about eight weeks prematurely last Friday and Posey and his wife, Kristen, finalized the adoption on Thursday. Ada and Livvi are healthy but will need to spend time in neonatal intensive care and will have weakened immune systems for the next few months.

Posey said he, Kristen, and 8-year-old twins Lee and Addie were “overwhelmed with joy” over the latest additions to their family.
Giants president of baseball operations Farhan Zaidi and manager Gabe Kapler both said they support their star player’s decision and wished Posey’s family the best.
“This is not a difficult one,” Kapler said. “I think that a lot of people around baseball will say family first. I think it’s important that we that we actually put that into action by throwing all of our support in making these decisions even easier for players because they know that they have to support the leadership in the organization.”
Posey was set to make about $8 million in salary this season, which the Giants are not obligated to pay under terms of an agreement between the league and the players’ union.
Posey’s absence leaves a big void in the Giants lineup as the team was counting on a bounce-back year after he was slowed by hip problems the past two seasons
The 33-year-old Posey was the healthiest he had been in years in the spring, hitting .455 in exhibition games this year before spring training was halted March 12 because of the virus outbreak.
Posey had undergone season-ending surgery on his right hip in August 2018 and said he still had discomfort running and making even the smallest of movements last season.
He batted a career-low .257 last season and has just 12 homers in 803 at-bats the last two years combined.
With Posey out for the season, that could open up an opportunity for heralded prospect Joey Bart, the team’s first-round pick in 2018 but Zaidi said he doesn’t want to rush him.

“This is a tough environment to evaluate young position players that you maybe went into the situation thinking they needed more competitive reps at the upper levels, Double A, Triple A,” Zaidi said.
“We’re having these workouts they’re live BP, a guy takes a big swing and hits a ball 430 feet. That’s all well and good but it’s not really a substitute for getting the hundred, 200, 300 at-bats that you might be getting in Double- and Triple-A where you get a much better sense of whether a guy’s capable of handling Major League pitching on a day in, day out basis,” he said.
The other options for catcher on the roster are minor league journeyman Tyler Heineman, Rob Brantly and Chadwick Tromp.
The 29-year-old Heineman has spent eight years bouncing around the minors with just five games of experience in the majors.
Brantly, who turns 31 next week, has played just 28 games in the majors over the past six seasons.
The 25-year-old Tromp was a promising prospect for the Reds until he required shoulder surgery in 2018.
Zaidi said the team will look to add another catcher to the roster, either as an extra body to catch bullpen sessions or a more proven player to compete for playing time.
Major League Baseball is scheduled to start the season on July 23. There were two games set for opening day, including the Giants taking on Los Angeles ace Clayton Kershaw at Dodger Stadium.