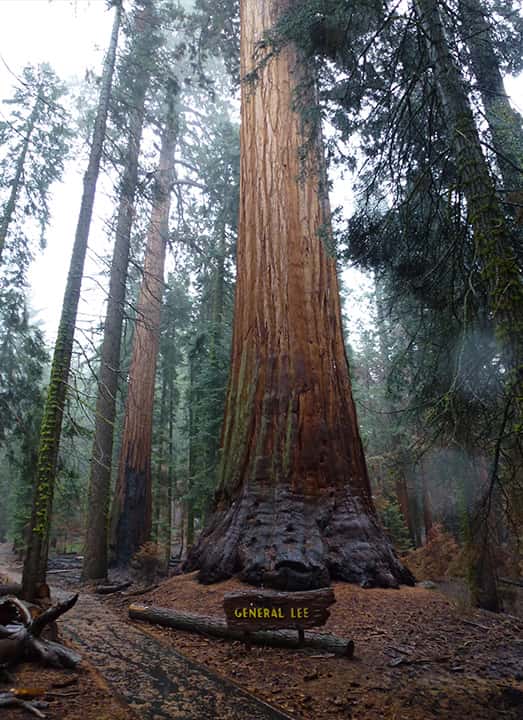 The Robert E. Lee Tree is unmarked, without a sign to designate it by name, in Kings Canyon National Park’s Grant Grove.

But the General Lee Tree in the Giant Forest of Sequoia National Park has a sign at its base.

Now, the names of these trees may only live as part of the park’s history.

“We will review our printed materials, exhibits, website, and other media to remove any references to Robert E. Lee,” Sequoia-Kings Canyon National Parks public affairs director Sintia Kawasaki-Yee tells GV Wire℠ by email. “The fact that these trees carry the name Robert E. Lee may persist as part of the park’s history but will not be represented in any current media.”

Meanwhile, in the midst of the Black Lives Matter movement, statues of Lee — commander of the Confederate States Army during the Civil War — are coming down throughout the country.

Related Story: Legal Hurdle to Removing Confederate Statues in Virginia: Wishes of Their ...

The 284-foot tall Robert E. Lee is the 11th largest tree in the world. The giant sequoia is thought to have been named by Richard Field, a southern lieutenant circa 1875 before the park’s formation.

The General Lee is believed to have been named around 1901 by John Broder, an early-day concessioner. There is a file in the park archives documenting correspondence between the park and the Daughters of the Confederacy, which lead to the dedication of the sign in 1937.

The park service is trying to figure out what to do with a sign at the General Lee tree and wants to hear public opinion before deciding whether to remove it, Kawasaki-Yee said.

There is also a redwood tree named for Lee in Yosemite National Park.

The Sherman and Grant Trees

The two most famous trees in Kings Canyon and Sequoia are named after Union generals: the General Sherman and the General Grant. Both of those prominent Civil War figures have controversies in their past, too.

Ulysses S. Grant, who served two terms as president between 1869 and 1877, was the last president to own a slave. Gen. William Tecumseh Sherman refused to employ Black troops in his armies. And, Sherman advocated for the “extermination of (Sioux) men, women, and children” as commander of the U.S. Army during the Indian Wars.

Moving Away From Naming Trees

The National Park Service has moved away from naming individual trees. Memorials are allowed in national parks only when Congress has specifically authorized them or there is a compelling justification for the recognition.

To select a new name for the Robert E. Lee Tree would require an act of Congress or approval by the National Park Service director.