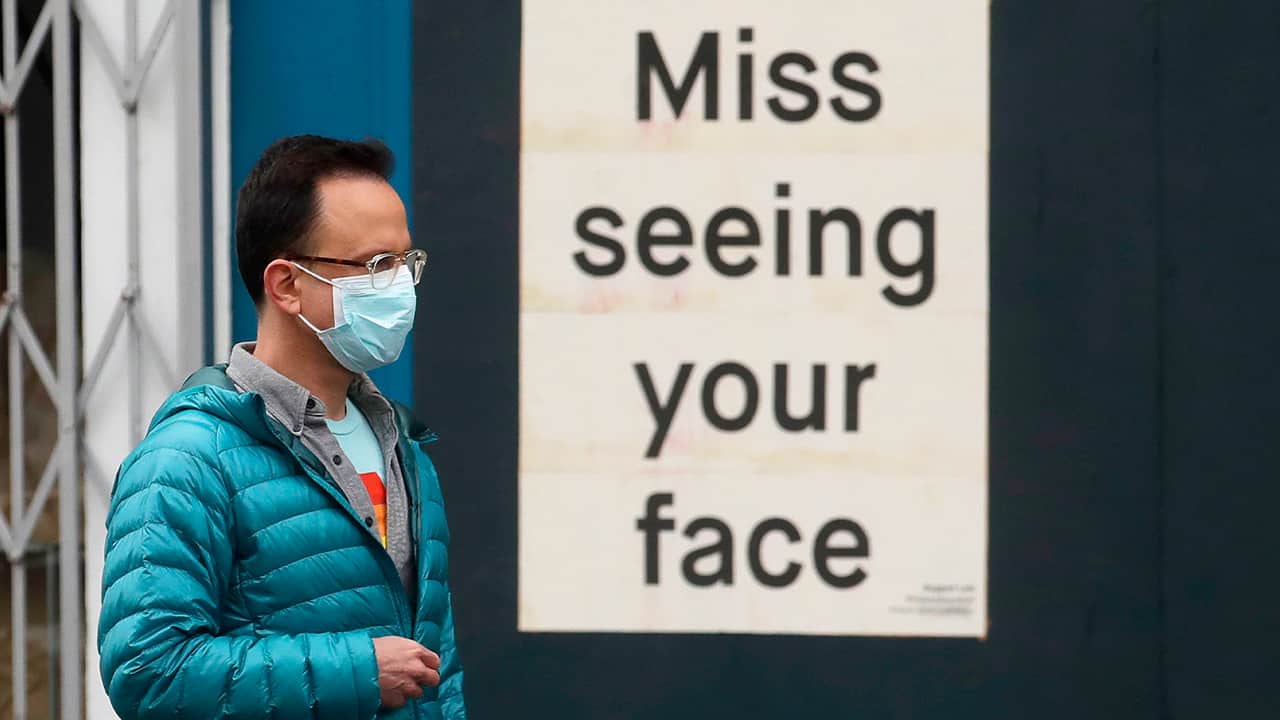 Who would have thought that something as insignificant as a few square inches of cloth could cause such a big brouhaha?

Diane Pearce, president of Fresno County and City Republican Women Federated, says the governor’s mask order only adds to the confusion, frustration, and outright anger that many people feel over the issue.

Gov. Gavin Newsom’s order last Thursday mandates face masks for most people over the age of 2 when they are indoors or near other people outdoors and may end the regional confusion over mask usage.

But the debate over whether they should be required in the first place rages on.

Prior to Newsom’s order, businesses and their employees found themselves on the front lines of the mask/no mask battle, trying to enforce a “patchwork” of local ordinances that varied between cities and counties and caused confusion among consumers, said Rachel Michelin, president of the California Retailers Association.

Face masks, hand washing, and social distancing are the three most effective ways to prevent being infected with COVID-19, health officials say. 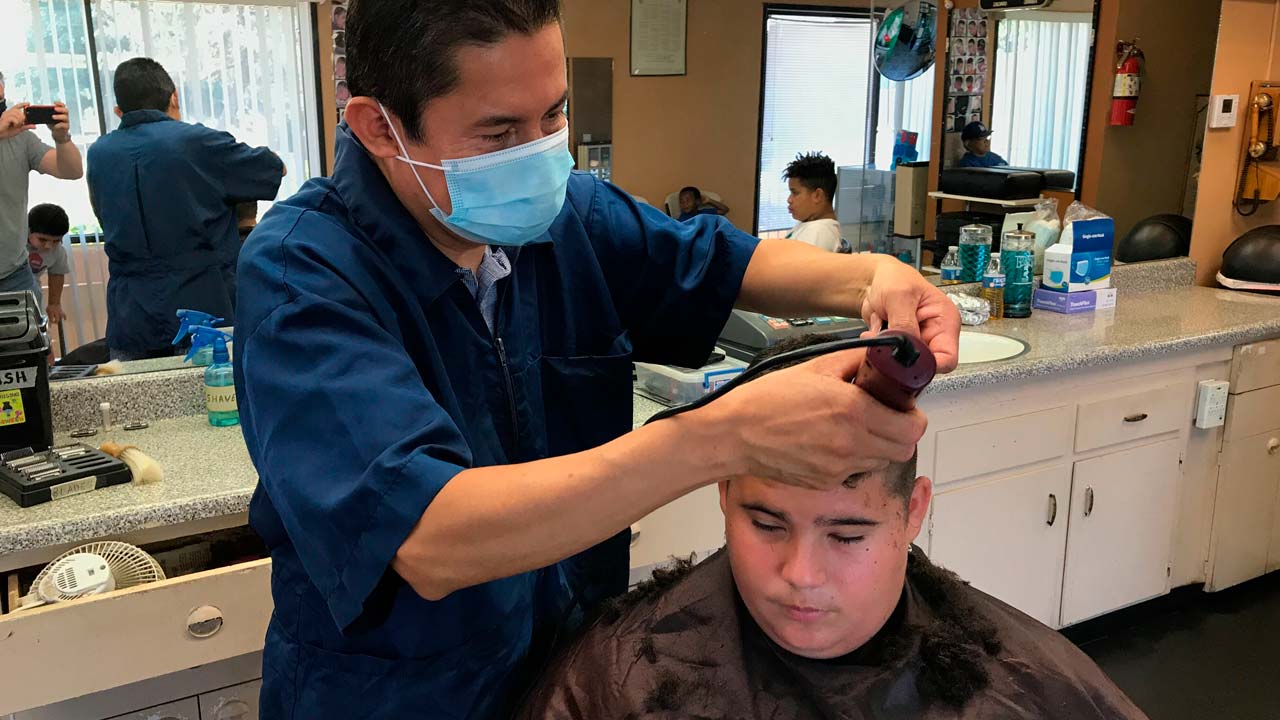 Beto’s Barber Shop in Madera reopened May 27, 2020, with a full house of customers. (GV Wire File)

Some Clarity, Some Confusion

The face mask mandate should help clarify what the rules are, although it’s unclear what will happen when consumers who could be wearing a mask — they aren’t hard of hearing or don’t have medical issues — choose not to, Michelin told GV Wire on Friday.

But all in all, she said, the mandate “is a good first step.”

Diane Pearce of Clovis doesn’t agree. Pearce, president of Fresno County and City Republican Women Federated, says the governor’s order only adds to the confusion, frustration, and outright anger that many people feel over the issue.

Pearce casts herself in the no-mask column and has preferred to shop in stores where they aren’t required. Up until the governor’s order on Thursday, that was pretty much every store in Fresno County outside of the city Fresno, which has required masks.

In terms of the difficulty of changing societal behaviors, Fresno State sociology professor Matthew Jendian said he is reminded of how long it took people to adapt when restaurants were first divided into smoking/no smoking sections and then later when smoking was banned outright.

She still hasn’t seen definitive proof that masks will stop the virus, but she’s convinced that its spread — especially among younger, healthier people who are better able to withstand its worst effects — could wind up creating the herd immunity that will protect people who are older or who have health issues and are at greatest risk from the virus.

Whose Job to Enforce?

And who will enforce the governor’s order? Pearce noted that Sheriff Margaret Mims has said her hands are already full trying to rearrest suspects who commit new crimes after they were released under the zero-bail order.

“I did tell my husband that this would be a very interesting thing to start my rap sheet with,” Pearce joked.

With the conflicting messaging from health officials about whether masks are needed or not — Americans were initially told that they didn’t need to wear them, and then scientists discovered how contagious COVID-19 is long before the sufferer starts showing symptoms — it’s almost no wonder that people are confused, causing some to angrily object to mask rules, said Matthew Jendian, a sociology professor at Fresno State.

In terms of the difficulty of changing societal behaviors, Jendian said he is reminded of how long it took people to adapt when restaurants were first divided into smoking/no smoking sections and then later when smoking was banned outright.

Message Needs to Be Clear

And confusion in the messaging definitely doesn’t help.

“I want to emphasize as a sociologist and social psychologist: One, if you expect people to follow the rules or do what’s asked, you’ve got to No. 1 be clear about what it is you’re asking them,” Jendian said.

One Costco shopper took his noncompliance to new levels when he recorded his exchange with a masked store employee over his refusal to wear a mask in a video posted to YouTube.

And, then there are customers who say they were made to feel unwelcome by employees because they were wearing a mask.

Nicole Plasencia, a Clovis High graduate who now works in the Los Angeles area, had returned home recently to see her family and stopped at what up to then had been her favorite sandwich shop.

In Los Angeles, everyone wears a mask and nobody complains about it, so Plasencia was surprised when a customer came in, asked the counter staff if he had to wear a mask, and then tore his off when they said he didn’t. What was surprising, and hurtful, she said, was when the staff — who were not wearing masks — made fun of her because she was.

With her history of asthma, “I could get really sick” from the coronavirus, Plasencia said.

She recounted her experience in a Yelp review.

Knowing Where to Shop And Eat

Finding stores and restaurants that are face mask-friendly was the theme of a recent conversation on the renamed Facebook group Supporting Local Business — Fresno COVID-19.

“If people have their reasons, can’t we just leave it at that? Give people the freedom to choose what they want to do with their health.” — Veleda Oltjenbruns, Fresno area resident

Veleda Oltjenbruns, who lives in the Fresno area, posed the following question: “I’m curious as to which restaurants and businesses are requiring masks and which aren’t, as well as which places you walk into where staff are wearing masks or not. We all clearly have different priorities, preferences, opinions, and that’s all good. Just good to know so we can all decide accordingly.”

With a son and other family members at higher risk of becoming seriously ill if they are infected with the coronavirus, Oltjenbruns says she’s been more cautious about where she shops or eats.

That’s caused some discord with members of her extended family who call mask-wearers “sheeple.”

“If people have their reasons, can’t we just leave it at that?” she asked. “Give people the freedom to choose what they want to do with their health.”