Juneteenth has added meaning this year amid Black Lives Matter protests following the killing of George Floyd at the hands of Minneapolis police.

Despite restrictions on social gatherings because of the COVID-19 pandemic, Juneteenth will be celebrated starting at 6 p.m. Friday at the Cultural Arts Park in downtown Fresno.

This year’s theme is United We Stand Divided We Fall, and the event is billed as a peace rally.

“The time is now for us to bridge the gap between communities and other cultures. All Lives Matter, but right now the Lives of Black people are hurting,” said event host Adrian Vibe Harris of Fresno in a Facebook post. “Our purpose is to: ORGANIZE! ORGANIZE! – people/allies/organization that will be committed to helping empower the Black Community.” 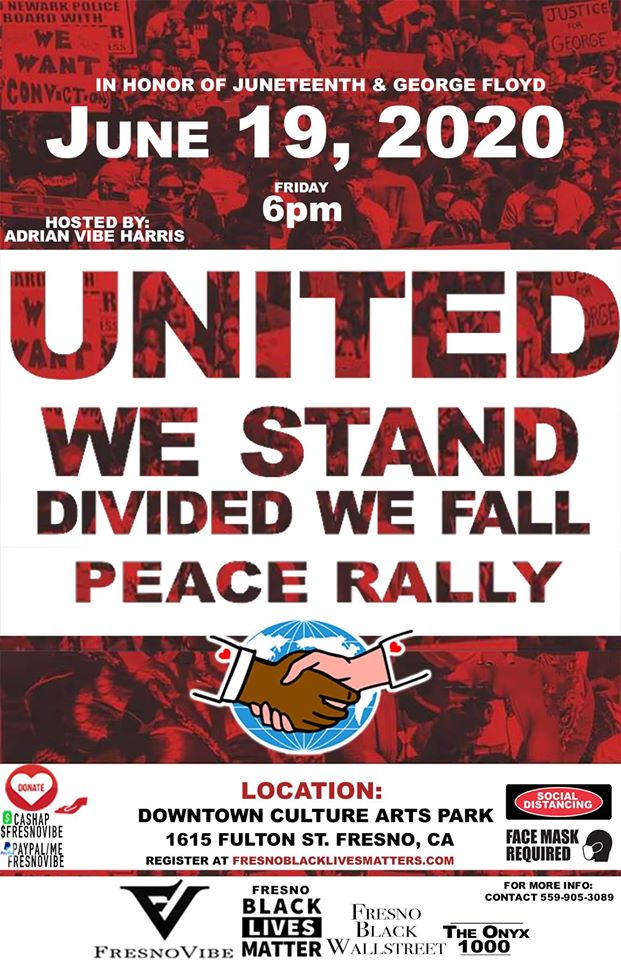 The celebration started with the freed slaves of Galveston, Texas. Although the Emancipation Proclamation freed the slaves in the South in 1863, it could not be enforced in many places until after the end of the Civil War in 1865.

Black Texans took the holiday with them as they moved around the country and overseas, Evans said, and what started as a local celebration went international.

Forty-five states and the District of Columbia recognize Juneteenth as a state holiday or day of recognition, like Flag Day. Countries like South Korea, Ghana, Israel, Taiwan, France, and the U.S. territory of Guam have held or now hold Juneteenth celebrations.

On Tuesday, Virginia Gov. Ralph Northam announced that he’s making Juneteenth an official holiday in a state that was once home to the capital of the Confederacy.

“It’s time we elevate this,” Northam said of the June 19 commemoration. “Not just a celebration by and for some Virginians but one acknowledged and celebrated by all of us.”

Northam was joined at a news conference by musician Pharrell Williams, who is from Virginia. Williams said Juneteenth deserves the same level of recognition and celebration as Independence Day.

“Here’s our day, and if you love us, it’ll be your day too,” Williams said.

“A paid holiday, it’s not the end of it, it’s just the beginning of it,” Virginia Beach native @Pharrell said about Virginia declaring Juneteenth a state holiday.

“Black lives matter in the eyes of the commonwealth. They didn’t always, but they do now.” https://t.co/fMxRrFE5FO

In addition, Nike, the NFL, Target, and other businesses will give their employees a day off for Juneteenth for the first time this year

Juneteenth celebrations used to revolve around the church with speeches and picnics, said Para LaNell Agboga, museum site coordinator at the George Washington Carver Museum, Cultural and Genealogy Center in Austin, Texas, which has one of the only permanent Juneteenth museum exhibits in the country.

It changed around the 1960s with the civil rights movement, she said.

“It became a little more secular and stretched over more than one day,” Agboga said. “It became kind of a time of community gathering … It’s really more huge parties and huge parades and big concerts, but always bringing in freedom. It’s all about freedom.”