A bit of digital sleuthing by the victim of a Little League building break-in helped police track down a couple of suspects.

The ensuing events involved some nifty Facebook work, some boots on the ground police work, an American flag, and a handwritten apology letter from one of the suspects.

Avelar says police arrived and discovered someone had cut the lock off a gate and broke into the snack shack.

“Somebody broke into it and stole just about everything that was in there,” said Avelar. “A hot dog warmer, a pizza oven, food warmer, yeti ice chest, all the snacks, all the chips, all the sodas, all the Gatorade, all the candy, and an announcer speaker.”

A few days later the snack shack was broken into again. The thieves took everything that wasn’t stolen the first time .

They even walked away with the league’s large American flag.

On Wednesday afternoon, the victim in the case noticed something very familiar on Facebook marketplace. He believed he’d located his stolen snack shack items, which were listed for sale on the site. The victim had photos of the stolen goods that he’d taken in March, which matched what he was seeing online.

Posing as a potential buyer of the goods; the victim managed to gain some valuable information. In fact, he managed to get enough information for the police department to track down the suspects’ location and even their names.

Avelar went to the Vagabond Inn at Jensen and Highway 99 and called the front desk around 2:30 p.m. Wednesday afternoon.

“I got ahold of the clerk at the hotel, and confirmed they (the suspects) were there,” said Avelar.  “I had the room number. I called the number. A young lady answered the phone. I told her –  Hey, I’m outside. Look out your window. We’re out here. We need the property back.”

Detectives then went up to the door and knocked, thinking the suspects just didn’t believe them. “She answered the door and they were, they were actually cooperative,” said Avelar. A man and a woman in their 30s were inside.

It appeared that most of the stolen property was sitting in the room. Avelar says, “They did admit to stealing the stuff. They gave it all back.”

The American flag was still there. 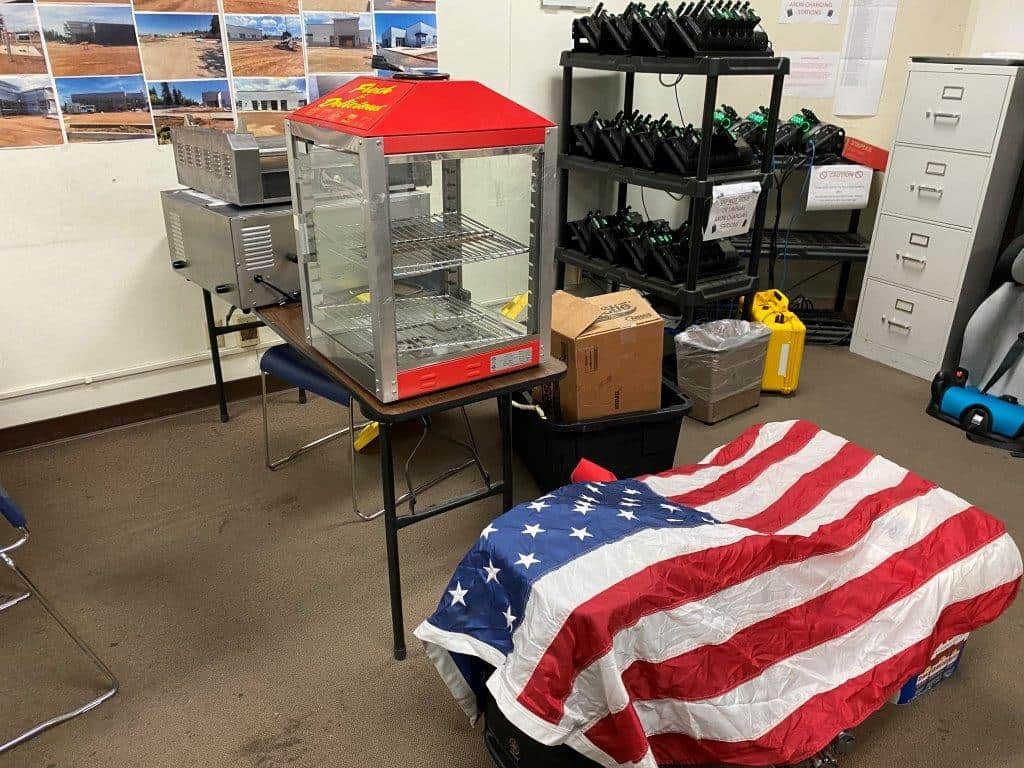 An American flag was among the items recovered. (Courtesy: Fresno Police Department) 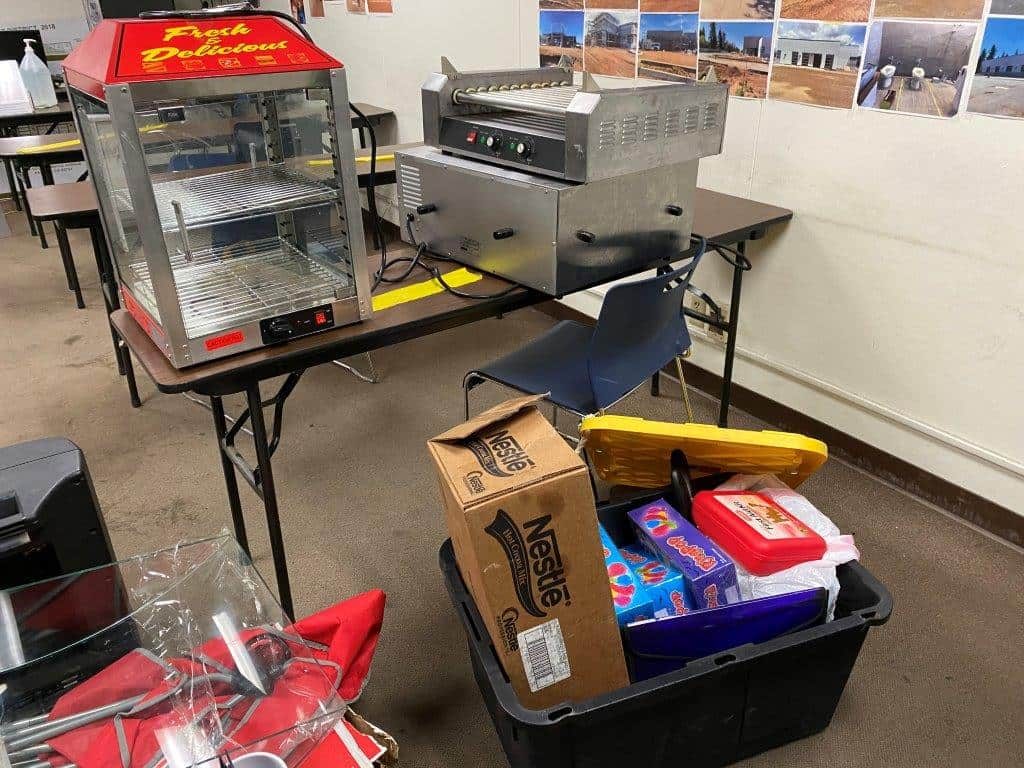 The suspects told police they stole the merchandise so they could sell it and pay for the hotel room they were staying in.

The man asked detectives if he could offer the victim a written apology.

Detectives said yes, but they couldn’t give the victim’s actual name for safety reason.

The suspect then addressed the handwritten letter to, “Mr. Smith.”

The rest of the letter reads:

“My apologies sir. I’m very sorry for everything. I was just hungry and did what I had to do for me and my girl to eat. I’m very sorry for doing what I did. That was eating away at me everyday especially knowing that it belonged to the church. Please forgive me.”

GV Wire℠ has agreed to not show or report the suspect’s name because detectives are still investigating the case. 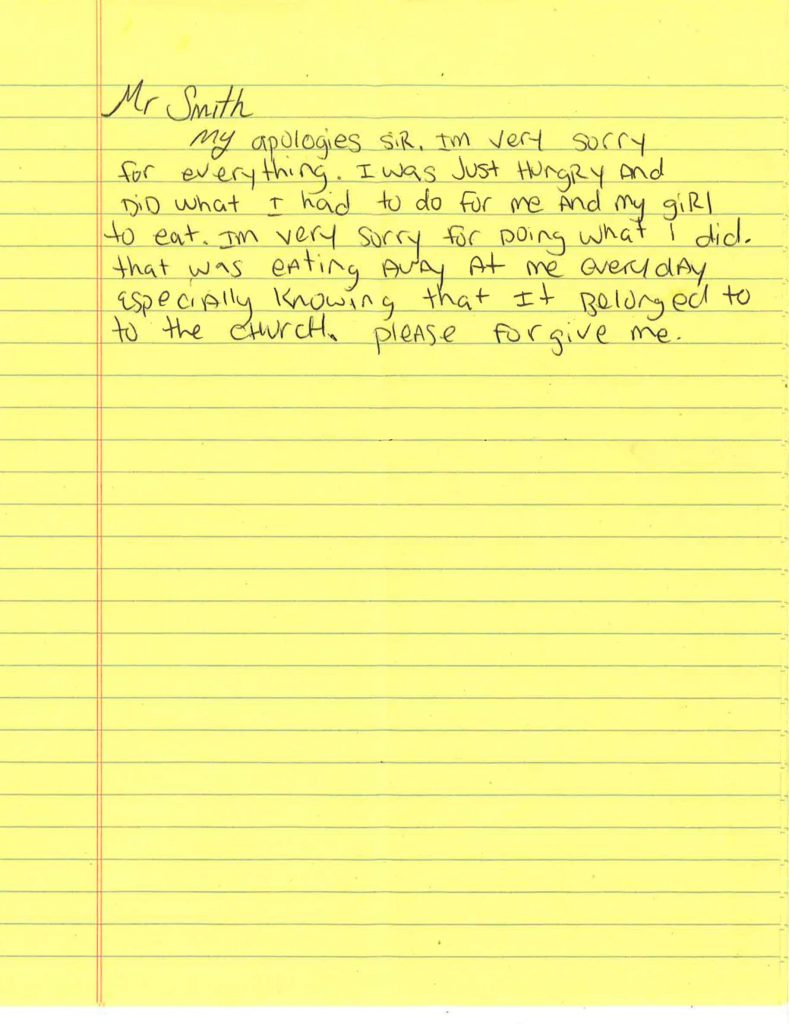 A little after 4 p.m. Wednesday, the victims drove to the Southeast police station to retrieve their stolen items.

Detectives shared a photo with GV Wire℠ of their smiling faces. Avelar says, “They were very thankful.” 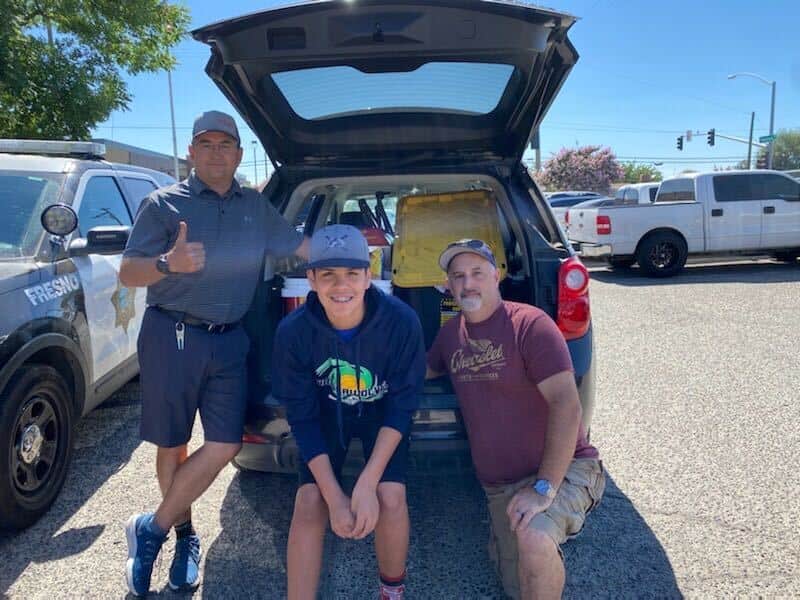 The snack shack theft victims were very happy to get their stolen merchandise back Wednesday afternoon. (Courtesy: Fresno Police Department)