More questions and concerns are piling up in the lead-up to a controversial new California law.

“We’re not sure exactly how we’re going to handle the VMT.” – Clovis City Manager Luke Serpa

Opponents say Senate Bill 743, or “Vehicle Miles Traveled” as it is commonly called, will put housing out of reach for many middle-class Californians. Estimates are that it will add $20,000-$30,000 on every home built.

City Managers and planning experts are trying to educate elected officials about what this law means for budgets and growth.

Gov. Jerry Brown signed SB 743, which changes how developer fees related to transportation are formulated, in 2013. The bill’s goal is to reduce greenhouse gas emissions.

The law abandons the past practice of basing fees on the costs of mitigating increased traffic impacts and replaces it with the VMT formula.

Reality is starting to set in about the sea change that the law’s implementation will trigger.

The law’s tool to do that is VMT for new developments. For instance, if a person drives to multiple places a day — work, store, soccer practice, etc. — all of those miles are counted up. Then the VMT fee is calculated for the development.

Even though there is growing bipartisan support in the Legislature to delay the law from taking effect, Gov. Newsom apparently intends to stick with the scheduled July 1 implementation. GV Wire has reached out to his office multiple times over the last several weeks and received no response. 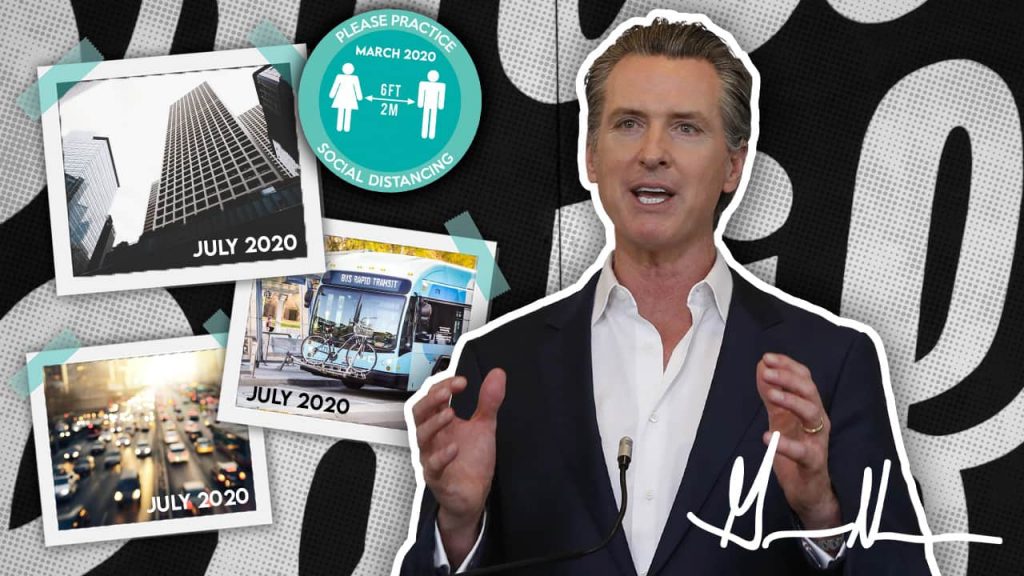 Opponents say the law intends to push people into high-density housing and mass transit during a time of a pandemic. (GV Wire/Alexis DeSha)

During Monday’s Clovis council meeting, Serpa was stopped during a budget presentation and asked to explain the impact of VMT.

“Any development project that comes in after July 1, this is going to be a real hindrance,” Serpa said. “Actually, it makes it harder to build greenfield development (and) most of Clovis’ development occurs on the edges.

“Any development project that comes in after July 1, this is going to be a real hindrance.”–Clovis City Manager Luke Serpa

“It’s going to hinder development for any new project that doesn’t already have (plans) in the pipeline.”

Serpa went on to explain that the real impact of VMT won’t be felt for another year or two when today’s housing inventory is depleted.

Fresno Council of Governments Asks for a Delay

Kristine Cai, deputy director of the Fresno Council of Governments, has logged countless hours trying to figure out how to calculate VMT. She’s participated in workshops and Zoom calls but still has many questions.

After meeting with all of the San Joaquin Valley COGs on Thursday, Cai became very concerned.  She wrote several comments to Caltrans explaining why a delay is necessary.

“It makes sense from a technical point of view for the state to pause and provide more opportunities to work out technical solutions with stakeholders,” says Cai. “It is not a political statement since our board hasn’t taken a position yet.”

“It makes sense from a technical point of view for the state to pause and provide more opportunities to work out technical solutions with stakeholders. It is not a political statement since our board hasn’t taken a position yet.”–Kristine Cai, Deputy Director of the Fresno Council of Governments

Earlier in the week, Fresno COG provided guidance to the city of Fresno. A major discrepancy between how Caltrans determines VMT versus what the COG does became apparent.

A document submitted to the Fresno City Council states: “Fresno COG ran a few test scenarios of roadway widening projects using the Fresno COG ABM. These results were compared with the results from the Caltrans Induced Travel Calculator. The comparison demonstrated (a) substantial difference in results.”

Fresno COG sent a series of suggestions to Caltrans on Thursday. Some of them are very technical in nature — but that’s the point.

“More clear guidance is needed on how to quantify mitigation measures,” Fresno COG said. “The state should conduct an economic impact analysis for the implementation of SB 743. The economic impact analysis should include the cost of VMT analysis, the average mitigation cost of a capacity project, and the additional cost to build projects approved by voters in the local measures.”

In its comments to Caltrans, Fresno COG pointed out that low-income disadvantaged communities will be left further behind.

“Gap closure projects or projects that shorten communities’ travel distance for access to jobs, goods, and other essential services should be categorized as exempt projects.

“(These) projects … are critical to such communities that otherwise don’t have such access and have to travel a longer distance to their destinations. In many cases, these are low-income disadvantaged communities that need help with access to transportation including highway access.”

A new website, stopvmt.com, started by  Sacramento-based Californians for Affordable and Reliable Energy aims to connect Californians with their elected representatives.

The first statements on the website spell out the group’s position.

“Starting July 1st, California will officially enforce new regulations on a new statewide plan that poses a serious threat to the health and welfare of residents across the state.

The site offers a link for people to find contact information for their local lawmakers.