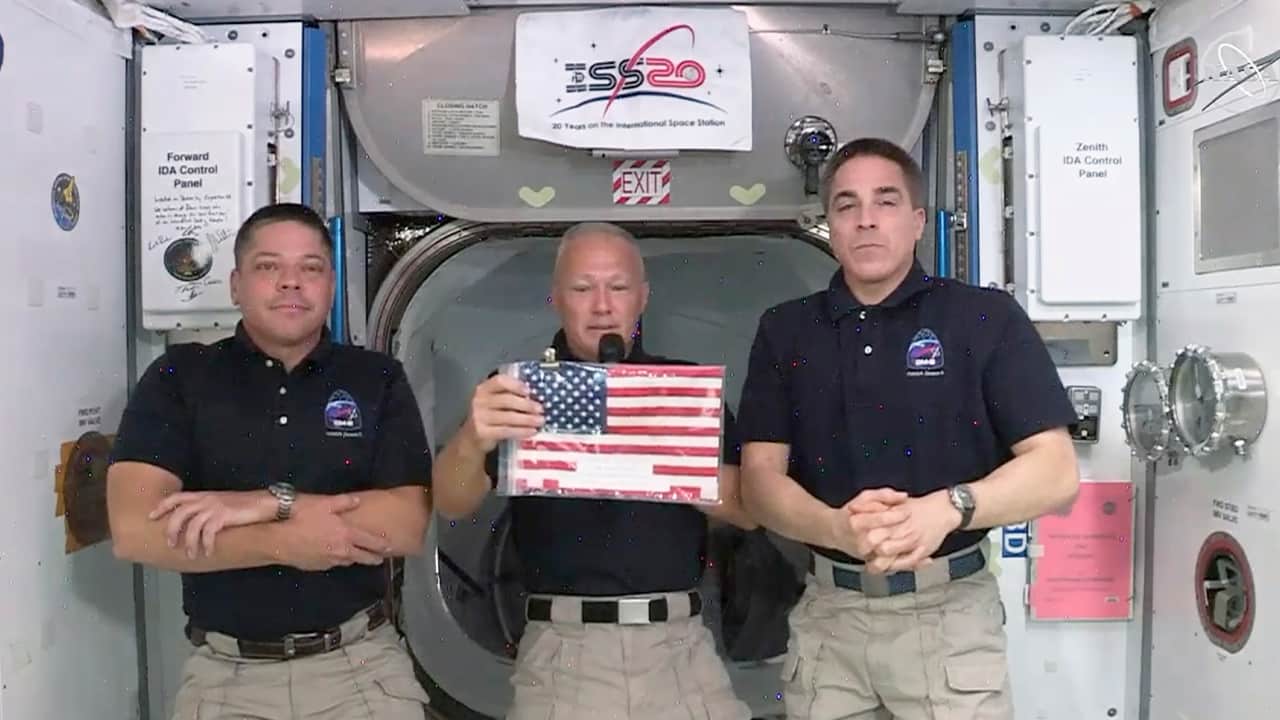 CAPE CANAVERAL, Fla. — The first astronauts launched by SpaceX declared victory Monday in NASA’s cosmic capture-the-flag game.
They quickly claimed the prize left behind at the International Space Station nearly a decade ago by the last crew to launch from the U.S.
“Congratulations, SpaceX, you got the flag,” NASA astronaut Doug Hurley said a day after arriving at the space station.
Hurley showed off the small U.S. flag during a news conference and again in a linkup with SpaceX headquarters in Hawthorne, California.
“You can bet we will take it with us when we depart back to Earth,” said Hurley, floating alongside Dragon crewmate Bob Behnken.
The flag flew on the first space shuttle flight in 1981 and the final one in 2011. Hurley was on that last shuttle crew.
The flag was an added incentive for Elon Musk’s SpaceX company and Boeing, competing to be the first private company to launch a crew to the space station. Saturday’s liftoff of NASA astronauts was the first from the U.S. in nine years. Boeing’s first astronaut flight isn’t expected until next year. The crew will include Chris Ferguson, commander of the last shuttle flight who now works for Boeing.
“Proud to yield the title of “The last commander of an American launched spacecraft” to @Astro_Doug who, with @AstroBehnken, has returned US to space from KSC after 3,252 days. Well done,” Ferguson tweeted following the SpaceX liftoff.
An estimated 100,000 people — suppliers, vendors, engineers, etc. — were responsible for Saturday’s flawless launch of test pilots Hurley and Behnken aboard a SpaceX Falcon 9 rocket from Kennedy Space Center. The Dragon capsule, also built and owned by SpaceX, docked at the space station Sunday.

“It’s awe-inspiring for all of us,” SpaceX manager Benji Reed told the astronauts from Hawthorne.
Reed asked them about the Falcon ride. Hurley said he could feel when the rocket went transonic and broke the sound barrier. The final push to orbit, on the second stage, was full of vibrations and felt like “driving fast, very fast on a gravel road,” he said. The astronauts instantly went from pulling more than three G’s — more than three times the force of Earth’s gravity — to zero gravity as soon as they reached orbit.
“Sounds like the ultimate ride in a Batmobile with the jet engine turned on,” Reed said.
Behnken said one of the first things he did upon reaching the orbiting lab was call his 6-year-old son, Theo, to hear what is was like to watch his father blast into space “and share that a little bit with him while it was still fresh in his mind.”
Hurley and Behnken spent Monday making sure their docked Dragon is ready to make an emergency getaway, if necessary. The capsule will serve as their lifeboat during their space station visit. They joined three station residents — an American and two Russians.
NASA will decide in the coming weeks how long to keep the pair there. Their mission could last anywhere from one to four months. The timing will depend on Dragon checkouts in orbit and launch preparations for the company’s next astronaut flight, currently targeted for the end of August.
With so much uncertainty and so many variables, Behnken said it was a little hard explaining to his son when he’d back.
“From his perspective, he’s just excited that we’re going to get a dog when I get home,” Behnken said with a smile.

FUSD Superintendent: ‘a Time to Acknowledge That Pain and Hurt’