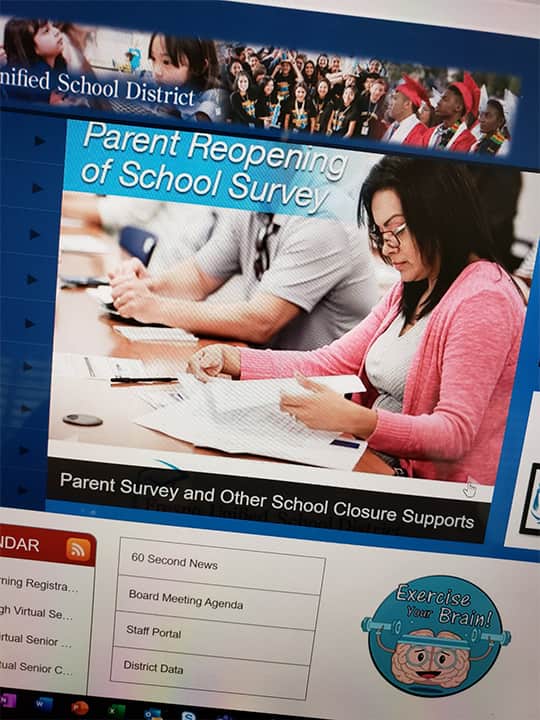 Fresno Unified parents can weigh in on what they would like to see schools look like when they reopen in August by answering a survey posted on the district’s website or through the Parent Portal.

The survey includes questions about how students who previously took a bus could get to school if social distancing limited the number of passengers and whether parents preferred an alternating days schedule (Monday-Wednesday-Friday-Tuesday-Thursday) or consecutive days (Monday-Tuesday-Wednesday versus Wednesday-Thursday-Friday), in case school attendance has to be limited.

Some parents who saw the survey soon after it was posted were unhappy to see that they apparently had only two options for the upcoming school year — the “hybrid learning model” that would combine in-classroom with distance learning, or an online-only model.

They assumed that meant that the district was not planning for a full return of all students.

However, district spokeswoman Nikki Henry said the district has not ruled out that option. The district’s intent is to learn which options parents preferr in the event that schools may not be able to fully reopen or remain fully open due to the COVID-19 pandemic.

“All options are still on the table — we did not ask about a full return to school as that would be regular operations,” she told GV Wire. “We are asking our parents their preferences IF we have to implement something other than normal operations based on health and safety guidelines.”

Much Is Still Uncertain

Superintendent Bob Nelson told reporters Tuesday afternoon that there’s a lot of uncertainty about whether schools can safely reopen months after they were forced to close to slow the spread of COVID-19, and what they will look like when they do reopen.

There are already many different ideas being bandied about how students may be educated, including whether one-quarter, one-half, or all students will be on campus at the same time.

And that’s causing some anxiety for parents.

“Not all decisions are hard and fast at this point,” Nelson said.

Tell District What You Want for Kids

The district will continue to make student and staff safety a top priority, he said.

But the district also wants to hear from parents about what their priorities are, and is asking them to take a survey online. It’s in English, Spanish, and Hmong.

The deadline to complete the survey is June. 11.

After reviewing the survey results, the district will unveil its reopening plans, Nelson said.

In a time of great uncertainty, one thing is certain, he said: The plans will need to be flexible, because conditions may change rapidly.

But the goal, Nelson said, “is to bring back as many kids as we can, for as much time as we possibly can. But we want to do that in a manner that’s safe and appropriate.”

US Cities Gird for More Violence as Trump Decries 'Lowlifes'