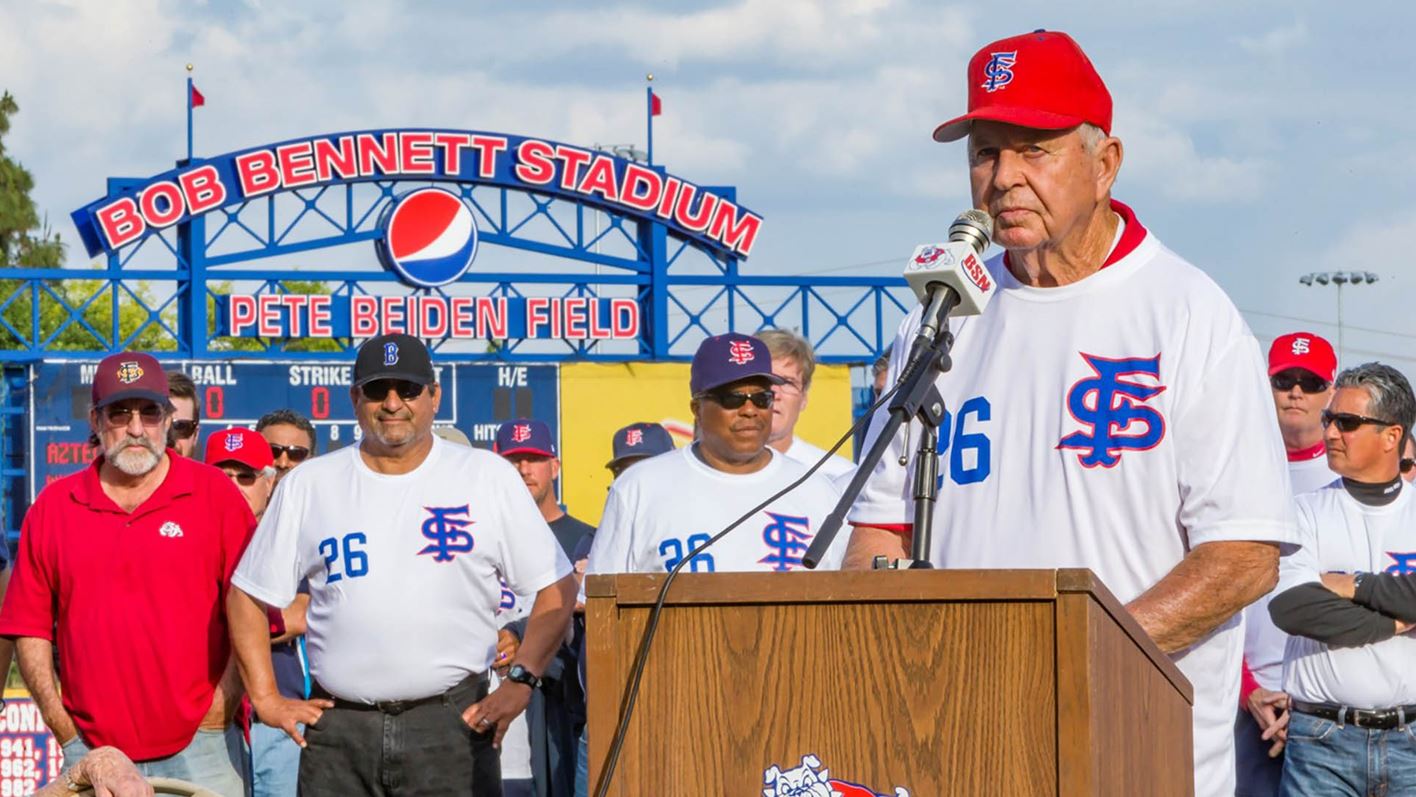 Bob Bennett, the winningest baseball coach in Fresno State history and a member of the College Baseball Hall of Fame, has died. He was 86.

The school announced Bennett’s death Sunday. It did not provide additional details. Bennett had been in the hospital since May 18 following a heart procedure.

Bennett won 1,302 games with 21 NCAA Tournament appearances, including two College World Series appearances, during a 34-year coaching career at Fresno State before retiring after the 2002 season. He was the seventh coach in NCAA history to win at least 1,300 games and ended his career with 26 straight winning seasons.

This is great! Thank you! https://t.co/IbIQACepyv

Inducted Into College Hall of Fame in 2010

“Our prayers go out to the Bennett family,” said Bulldogs coach Mike Batesole, who succeeded Bennett in 2003. “Rest in peace to the greatest coach our Valley will ever see. (His) name on the stadium says it all.”

Fresno Mayor Lee Brand said that the “Central Valley has lost another legend and college baseball has lost a visionary.  His impact on the Fresno State program and indeed, on our university, can be measured not just in wins and championships, but in the people he touched by showing them the value of loyalty, respect, and humility.

“He was the epitome of what it means to be a mentor and he will be missed.”

Catcher for the Bulldogs Under Pete Beiden

Bennett was a catcher at Fresno State, playing for Beiden from 1952-55 and helping lead the Bulldogs to three NCAA Tournament appearances. He began his coaching career at the high school level after graduating. Bennett filled in at Fresno State in 1967 when Beiden took a sabbatical and became the full-time head coach in 1970.

“I have never met anyone who loved the game more. He never stopped giving or teaching.” — Paul Loefler, 940 ESPN, the radio voice of Fresno State athletics

Bennett led the Bulldogs to the College World Series in 1988 and 1991 and won 17 conference titles. He was a conference coach of the year 14 times and coached nine first-round draft picks and 32 All-America selections. Among the players he coached who became major leaguers were: Terry Pendleton, Dick Ruthven, Dan Gladden, Bobby Jones, Jeff Weaver, Tom Goodwin, Eddie Zoszky, and Dennis Springer.

“Bob Bennett’s transformative impact on Fresno State and Bulldog Baseball will be felt for generations to come,” said Fresno State Athletics Director Terry Tumey. “His memory will always live on inside Bob Bennett Stadium. Our thoughts and prayers are with the Bennett family.”

Paul Loeffler, the radio voice of Fresno State athletics, said: “What a gift to our Valley that a man of such personal and professional excellence would spend his entire life making our community better. Coach Bennett is a legend in college baseball, and I have never met anyone who loved the game more. He never stopped giving or teaching. The legacy his amazing family and the men who played for him represent will be a credit to Fresno State and the Valley forever.”

(Associated Press and gobulldogs.com contributed to this story.)

In the Name of George Floyd, Thousands Protest in Downtown Fresno