Businessman Chris Milton, who spoke Sunday in downtown Fresno at a peaceful protest of George Floyd’s death, said in a Facebook media video Monday, “I am going to tell you right now, it’s fake. That has absolutely nothing to do with Black Lives Matter. “

Milton attributed the post to the “White Nationalist Movement” upset about blacks and whites uniting to confront problems in America.

Click on the video below to hear Milton’s complete remarks on the fake social media post and efforts to repair racial relationships in Fresno:

Fresno PD Says It Is Investigating the Riots Post

Meanwhile, the Fresno Police Department said on its Facebook page that it “is aware of the post that has been circulating through social media about a potential aggressive protest tomorrow afternoon. We have dedicated several resources to tracking the validity of this threat and we are working towards a peaceful solution to any group that may want to be heard in our community. The police department will be prepared to respond to any acts of violence against persons or property in our city. Stay strong Fresno.”

D’Aungillique Jackson, president of the Fresno State NAACP chapter, took to Twitter to denounce the “BLM Fresno Riots” post and to urge people not to show up at River Park on Tuesday.

“Tearing up Fresno” goes completely against the message that organizers of Sunday protests are trying to spread, she said.

“We were able to confirm that this post originated on Reddit from an alt-right source,” Jackson told GV Wire’ Nancy Price in a Zoom interview Monday.

PSA FOR ANYONE IN FRESNO: DO NOT ATTEND THE “PROTEST” BEING HELD TODAY. THEY ARE TRYING TO HURT THE BLM MOVEMENT. RT AND SPREAD THIS MESSAGE!! pic.twitter.com/78IshBkY9K

Here is an image of the riots post circulating on social media: 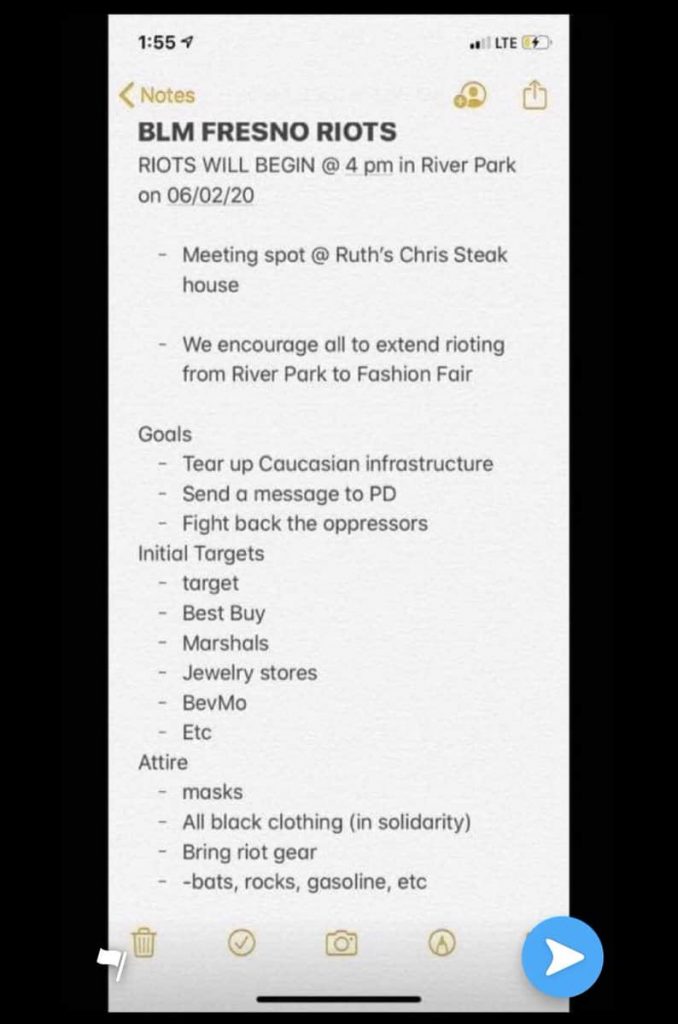 Image of a social media post claiming there will be Black Lives Matter riots on Tuesday, June 2, in Fresno, California. Black leaders say the post is fake.