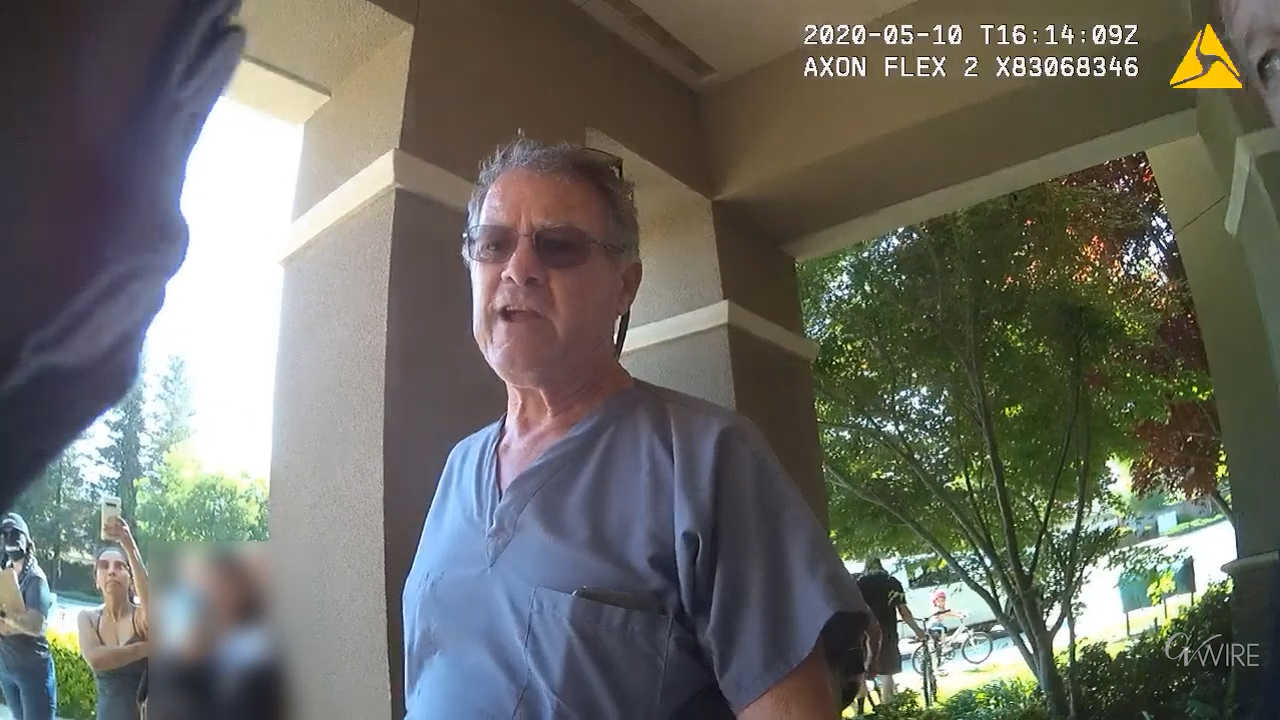 The two minutes of footage shows the unidentified officer making his way through a hostile crowd so that three code enforcement officers could serve a citation.

The dine-in restaurant was open contrary to the city’s shelter-in-place orders.

“After a thorough review of this incident, it does appear that the officer was acting lawfully while assisting Code Enforcement. It also appears that the individual in this case did obstruct the officer in his duties,” Hall said.

“I gave clear direction to my officers that they would seek voluntary compliance and that no arrests or any enforcement would take place without my approval through the officer’s chain of command. This did not occur. I have concerns in the manner in which this incident was handled and I have ordered an Internal Affairs investigation be conducted to investigate the handling of this incident,” Hall said.

Hall said the officer was escorting code enforcement officials, who are under the control of the city atttorney, who answers to the Fresno City Council.

“Sadly, the Fresno Police Department is being placed in the middle of opposing political view points on how the City operates during the COVID-19 pandemic. The Fresno Police Department has a duty to enforce laws that are passed by your elected politicians. Regardless of our personal opinions and beliefs, we take an oath to uphold and enforce these laws until a judge rules them to be unconstitutional,” Hall said.

The body-cam video starts with the officer approaching the Waffle Shop.

“All right folks, make way,” the officer said while walking into a crowd of approximately 15 people.

The onlookers are jeering, saying “we don’t have to let you in,” and asking if the officer had a warrant.

“Don’t interfere with my job, OK?” he said to a woman filming with her smartphone.

The officer then approaches the door, where Miller is standing.

“What are you talking about?” Miller said.

The officer again asks the crowd to “make way.”

“No!” Miller responded, refusing to move as he stood in front of the door.

It then appears that the officer grabs Miller’s wrist to place restraints on him. Miller tells him to “get your hands off of me.”

It is unclear if Miller then complied with putting his hands behind his back, or the officer forced him to.

The officer is then seen escorting Miller to his police SUV in the parking lot. Miller’s wife, Kelly Miller, held her husband’s arm, telling the officer that Tom Miller is a veteran, a diabetic, and has a heart condition.

Others yelled at the officer, using foul language.

In Monday’s news release, Hall said that Tom Miller was “detained” so that code enforcement officers could “complete their duties.”

Hall said that Miller “was released without any further charges being filed.”