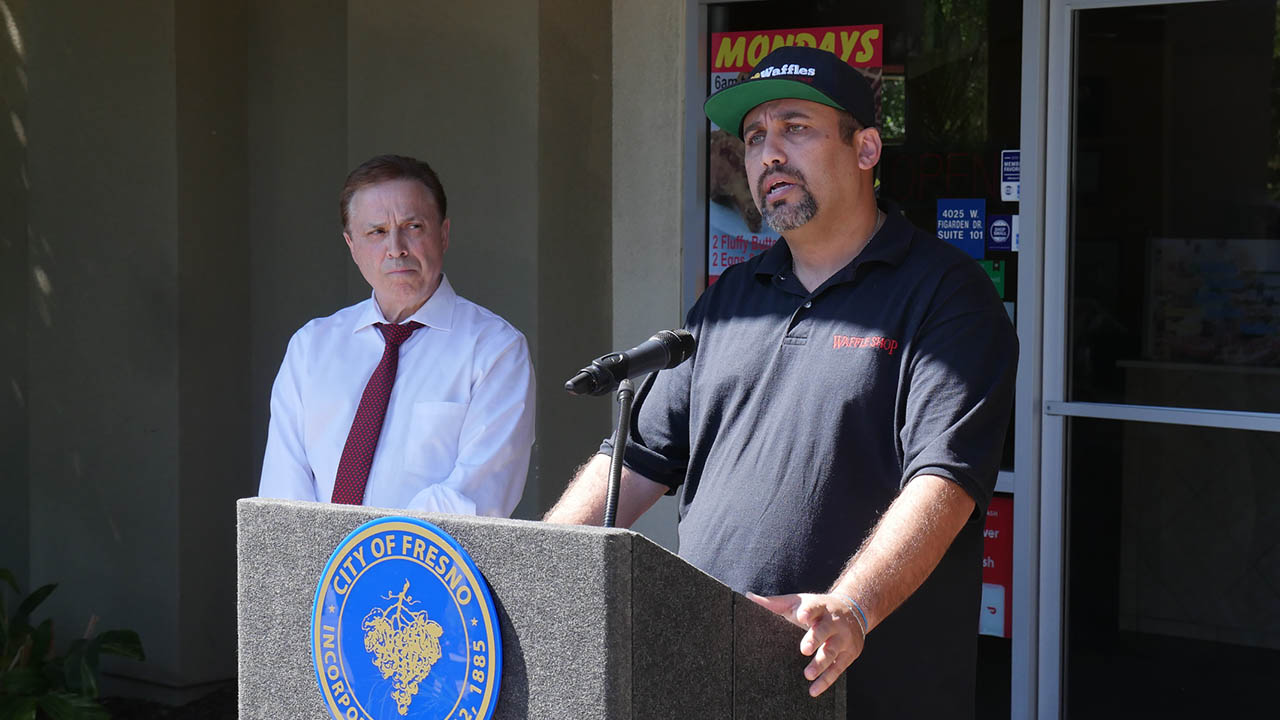 Update 5/12/2020: Waffle Shop owner Ammar Ibrahim announced he is reverting to take-out only, starting Wednesday. The Waffle Shop had opened for dine-in service three days, racking up $6,000 in fines from the city. The next citation would carry a $10,000 fine. Below is Ibrahim’s full Facebook post. 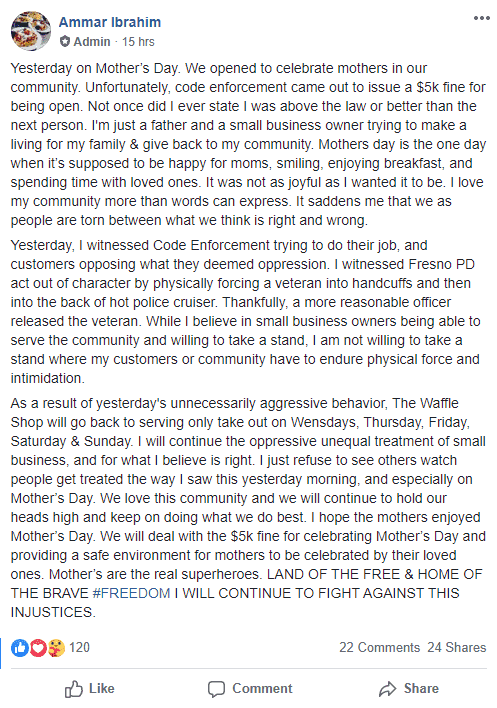 Facing the possibility of a $10,000 fine, Waffle Shop owner Ammar Ibrahim is unsure whether he will reopen his northwest Fresno restaurant Tuesday.

Speaking at a news conference arranged by councilman Garry Bredefeld in front of the restaurant Monday morning, Ibrahim thanked his supporters.

“We’re not trying to fight with the city. We’re just trying to survive. We’re essential just like everybody else. We’re not any better than anybody else. But treat us fair. That’s all we’re asking. Let us all open up,” Ibrahim told the media and about 30 supporters.

Ibrahim opened his breakfast and lunch shop on Thursday to dine-in customers, defying city orders that prevent such an action. He received a warning, then two citations with fines of $1,000 and $5,000. His next fine could be $10,000.

Although he plans to challenge the fines, Ibrahim says his restaurant can’t withstand a $10,000 penalty.

The restaurant was closed Monday as scheduled so Ibrahim could clean the dining area.

Related Story: Here’s a List of Restaurants That Offer Delivery in Fresno and Clovis

Many Businesses Open Under the ‘500-Foot Rule’

“We’re not trying to fight with the city. We’re just trying to survive. We’re essential just like everybody else.” — Waffle Shop owner Ammar Ibrahim

Today the city allowed many retail stores to reopen either by curbside delivery — or for certain low-traffic businesses — with only one person in the store per 500 square feet.

All customers must wear masks as well.

However, dine-in restaurants and hair and nail salons remained closed, per state orders.

“Where did they come up with 500 square feet? Six-feet social distancing — I’m not a mathematician, but square it is thirty-six square feet,” Bredefeld said. “Do you know what a detrimental impact that has on businesses? And by the way, have you been to Lowe’s and Home Depot and Wal-Mart? Are people one customer per 500 square feet? No. So, again, it’s arbitrary, it’s capricious and it’s all unconstitutional.”

City spokesman Mark Standriff explained how the city arrived at the 500 square-foot rule.

“We discussed it with the Fresno Recovery Advisory Committee and used an abundance of caution in issuing the guidelines, which were based on the low occupancy of these authorized businesses,” Standriff said.

One customer was detained by police after a confrontation Sunday at the Waffle Shop.

Three code enforcement officers and a police officer came to the restaurant, which was open despite the city’s order that dine-in restaurants remain closed except for curbside orders or delivery.

A video later posted on Facebook by Jim Fisher, showed on officer place patron Tom Miller in handcuffs after it appeared Miller would not let the officer into the restaurant. Miller was later released. He is the father-in-law of Assemblyman Joaquin Arambula (D-Fresno).

“This was an unfortunate incident and we are committed to making sure it won’t happen again,” Mayor Lee Brand said. “I want everyone to know that I fully understand the financial hardship of every small business in Fresno and we are doing everything we can to help them, including a plan to safely restart our local economy. Let’s all take a deep breath and then commit to work together to bring our local and state partners in line with our plans to get our people back to work.”

“I am concerned over the matter in which this incident was handled as it doesn’t appear to be consistent with our department’s policy concerning demonstrations or the directions I have given officers via a Chief’s memorandum for handling enforcement of the Emergency Order,” Hall said in a news release.

Bredefeld Lashes Out at City Leaders

Bredefeld continued voicing his anger over the way the city has handled the coronavirus pandemic.

When Bredefeld called out local media for its coverage of the pandemic, the audience hissed and engaged in verbal and physical harassment toward the reporters present.

“We officially yesterday entered the Twilight Zone. Yesterday’s events at the Waffle Shop were tragic, dangerous, completely unnecessary, and they were the direct result of the tyrannical policies by Brand and the Fresno City Council,” Brand said.

The restaurant’s supporters carried signs celebrating freedom and criticizing city leaders, including Brand. One car had “Mayor Brand is a putz” painted on a side window, using Yiddish to express the opinion.

When Bredefeld called out local media for its coverage of the pandemic, the audience hissed and engaged in verbal and physical harassment toward the reporters present. 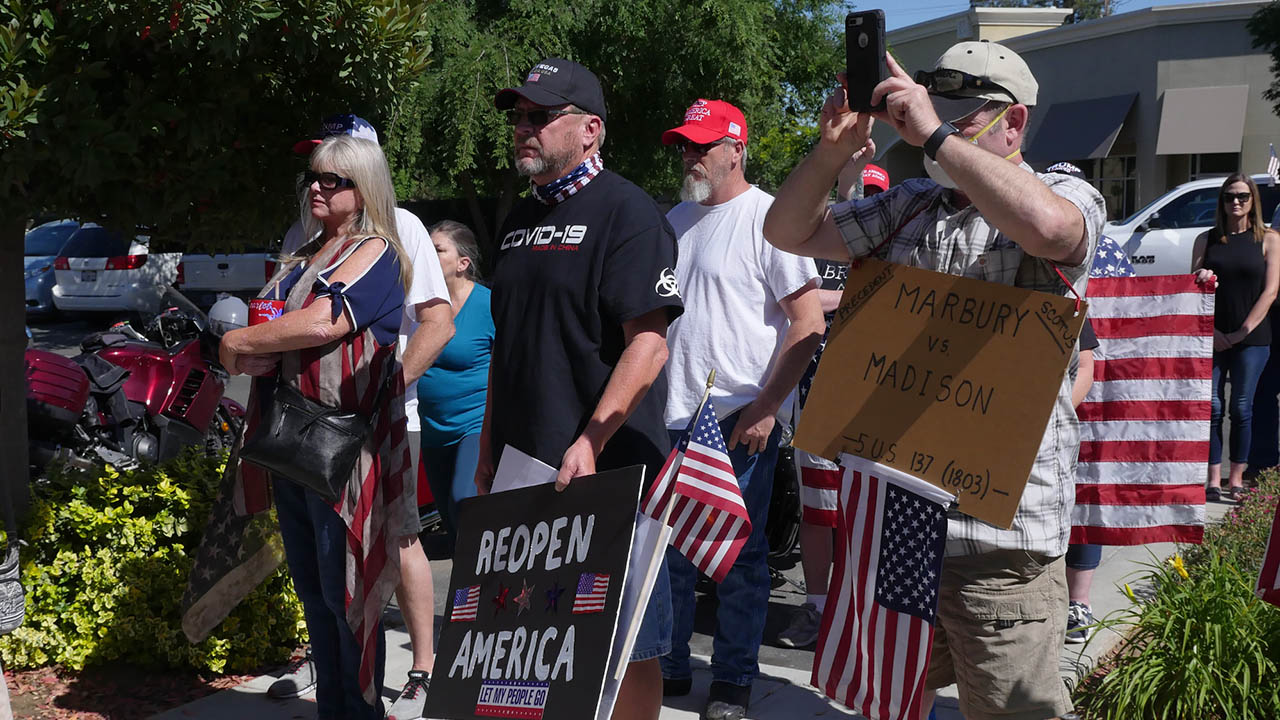 Supporters turned out Monday at the Waffle Shop as owner Ammar Ibrahim talked to the media. (GV Wire/Jahz Tello)