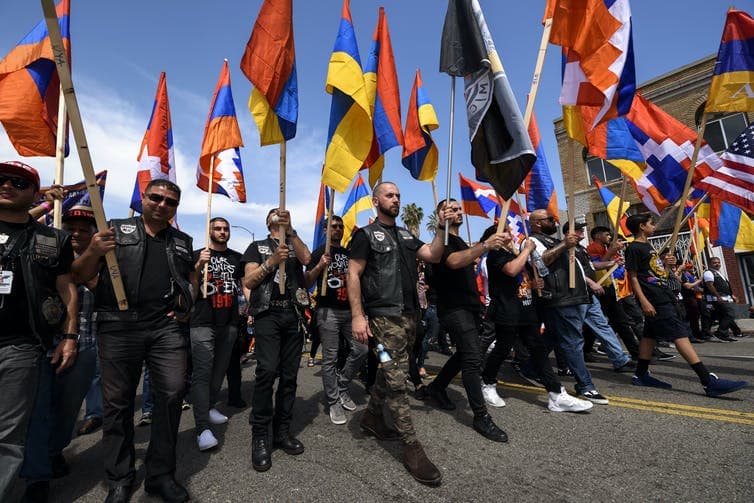 Armenian communities across the globe mark the murderous history of state violence in Turkey with the Armenian Genocide Remembrance Day on April 24. 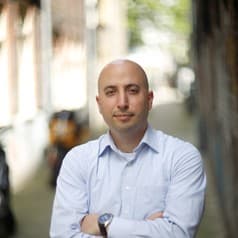 That commemoration marks the period between 1914 and 1921, when the Ottoman Empire carried out an extended campaign to expel or kill the Armenians living in Turkey and its border regions. From massacres to death marches, 1.5 million of Turkey’s historic Armenian population was murdered.

Since 1923, Turkey has denied perpetrating what came to be called the Armenian genocide. It has pressured its allies to refrain from officially declaring the events a “genocide,” which the United Nations defines as acts committed with the “intent to destroy, in whole or in part, a national, ethnical, racial or religious group.”

But in a milestone vote in late 2019, both the U.S. House and Senate defied that pressure and the weight of over 40 years of precedent.

They passed a bill declaring that the killing of 1.5 million Armenians by the Ottoman Turks was, in fact, a genocide.

Since 1975, numerous efforts were made to pass an Armenian genocide bill. The decades-long struggle involving Turkey, Israel, Armenian-Americans, the American Jewish community and the U.S. government over the commemoration of the Armenian genocide resulted in failure to pass a bill every time – until 2019.

The Armenian Genocide took the lives of 1.5 million people. Scholar Eldad Ben Aharon discusses US recognition of the Genocide.

I am a historian of international relations. I am currently writing a book that focuses on Israeli-Turkish-American relations and the contested memories of the Armenian genocide.

The political struggle over U.S. recognition of the Armenian genocide was set in motion during the presidency of Jimmy Carter in 1976. Carter came to the job with a commitment to protecting human rights. That commitment was soon tested by the longstanding strategic relationship between the U.S. and Iran, which was ruled by the Shah with an iron fist. By late 1977, U.S.-Iranian relations were deteriorating after Carter sent mixed signals about the Shah’s dictatorship and his abuse of Iranians’ human rights. 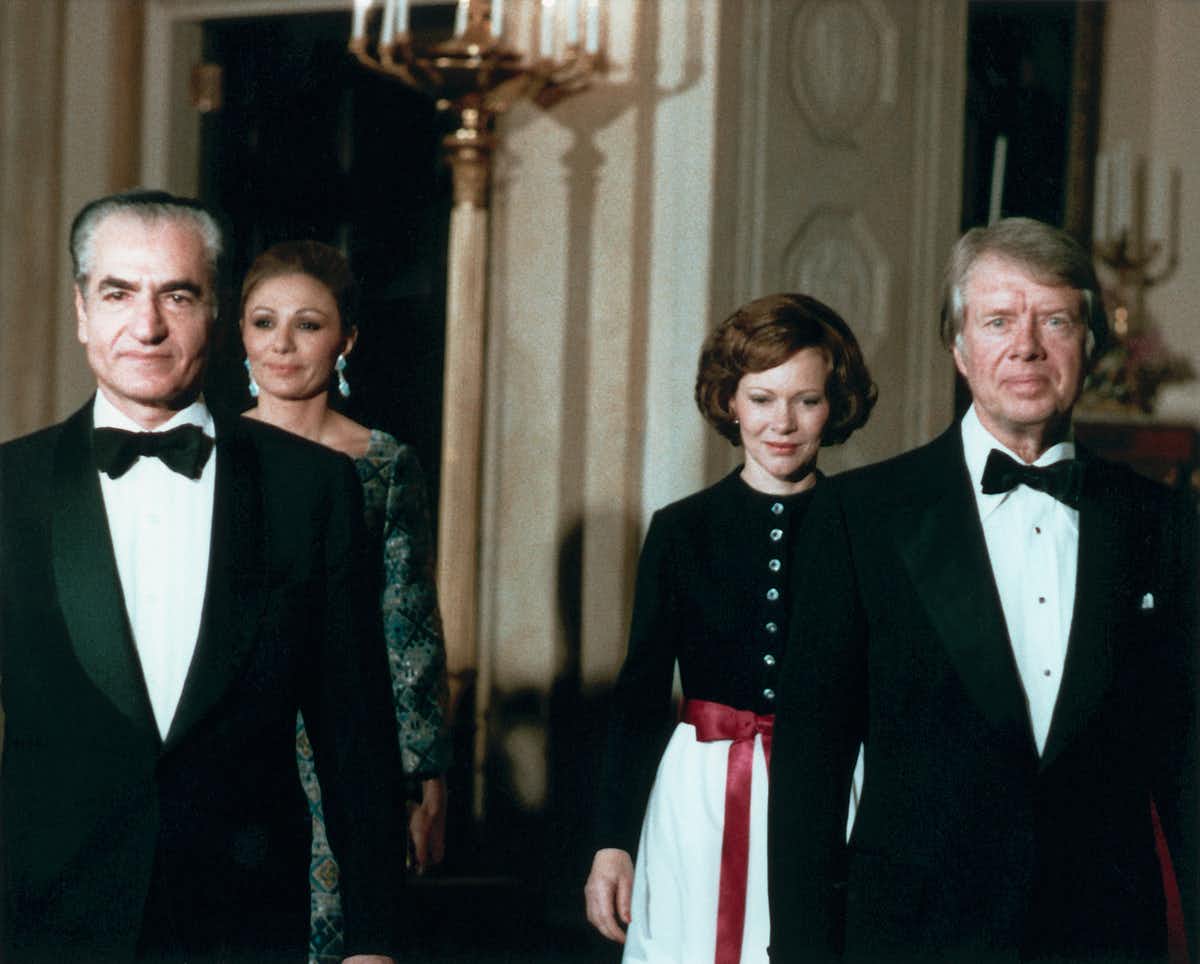 President Jimmy Carter and his wife Rosalynn escort the Shah and Shahbanou of Iran to a state dinner in the White House in 1977. (Corbis via Getty Images)

In 1978, Carter’s fraught relations with the Shah weakened the Iranian leader’s hold on power. Popular protest movements mounted, culminating in the Shah’s overthrow in 1979, the Iranian fundamentalist revolution and the American hostage crisis.

The criticism at home about the Carter-Shah relationship and American Jews’ reluctance to support Carter’s administration convinced the president and his staff members to re-promote human rights through American foreign policy.

Their strategy: Use the Holocaust as a universal lesson for genocide prevention to help reinforce ties with Jewish voters.

While the Iran crisis was playing out, on Nov. 1, 1978, Carter launched the President’s Commission on the Holocaust. Carter requested that the commission submit a report addressing the “establishment and maintenance of an appropriate memorial to those who perished in the Holocaust.” 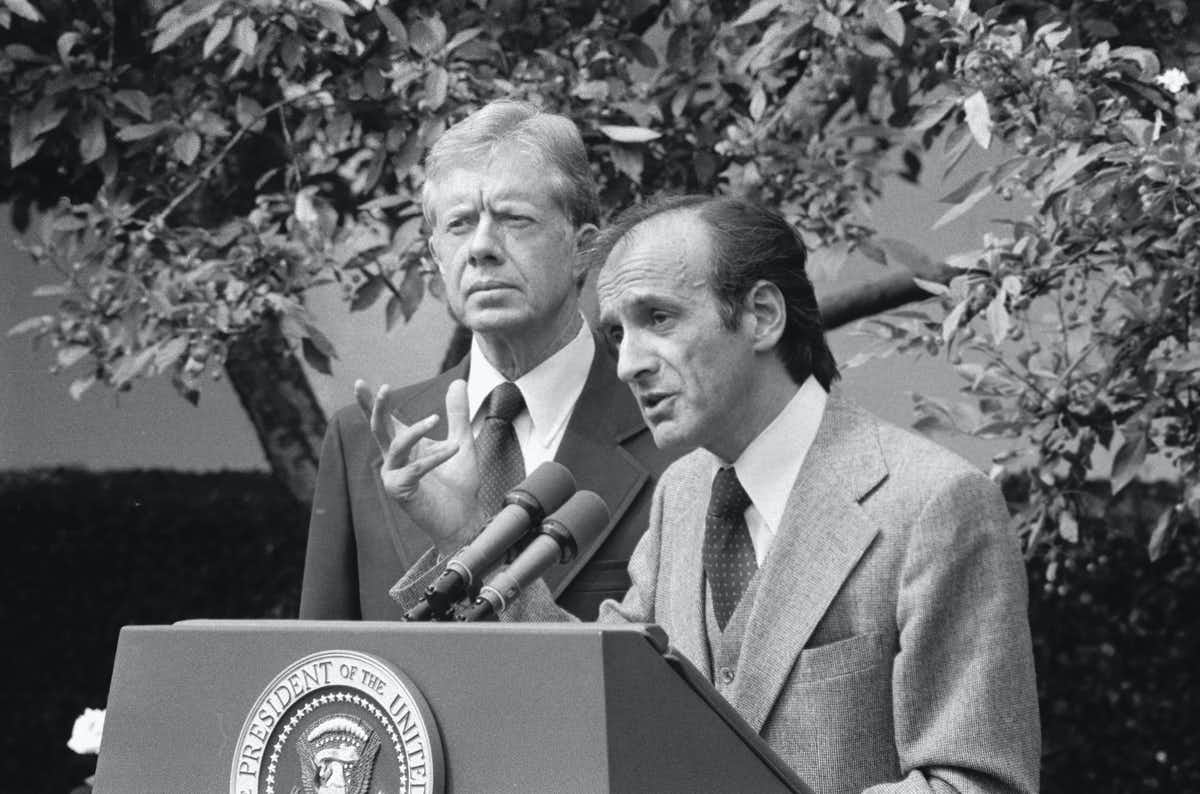 Elie Wiesel, chairman of the President’s Commission on the Holocaust, spoke about the Holocaust and presented President Carter with the panel’s final report. Carter vowed that a U.S. memorial would be built. (Bettmann/Getty)

The commission included American Holocaust survivors like Elie Wiesel and Benjamin Meed. The commission’s September 1979 report recommended special days of remembrance for the Jewish victims of the Holocaust, a dedicated education program, and the establishment of the United States Holocaust Memorial Museum as a national memorial.

The museum, the report said, should be focused on one specific aspect of the Nazis’ many crimes: the “unique” and unprecedented nature of the murder of the Jews – even over other Nazi victims. 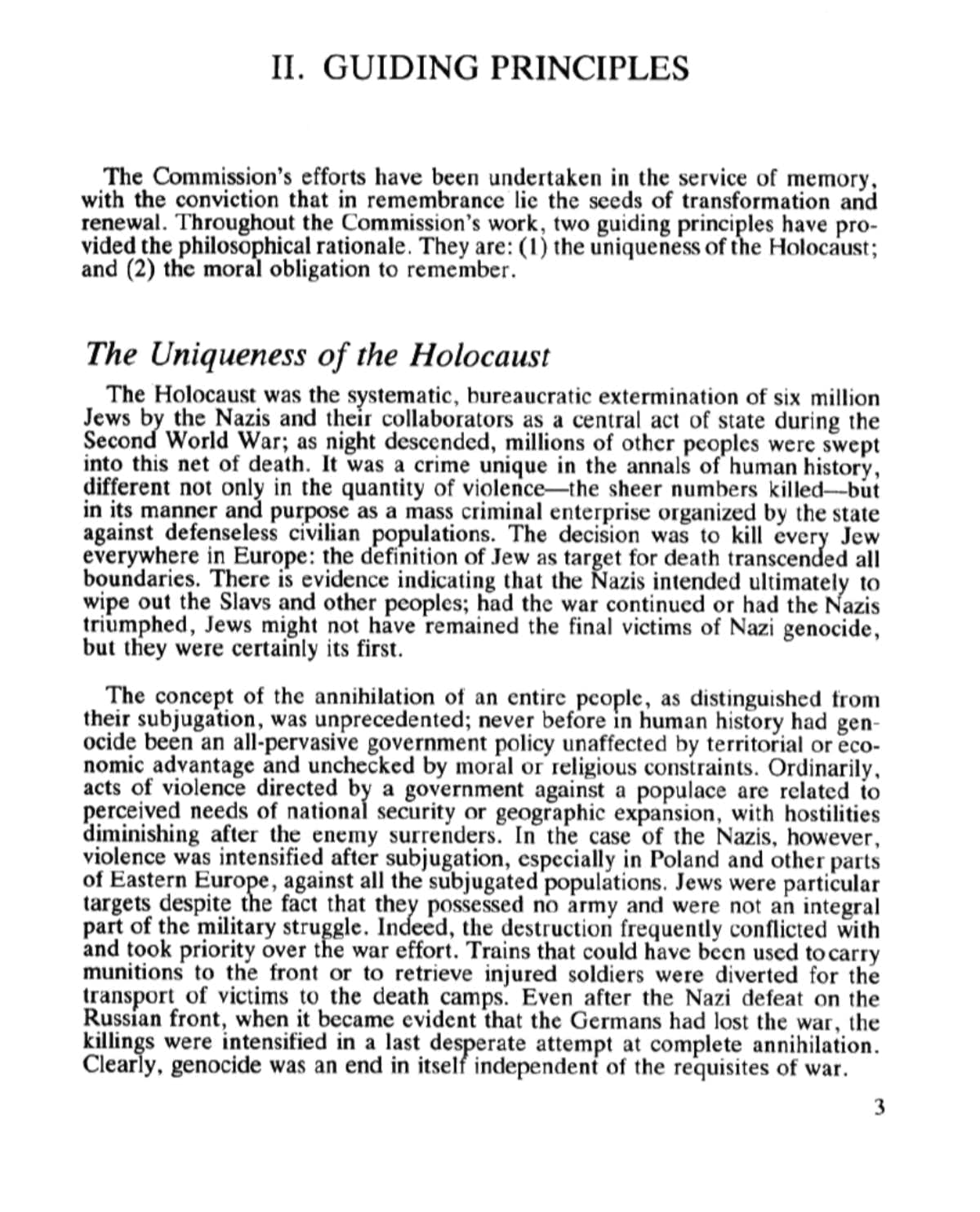 “Millions of innocent civilians were tragically killed by the Nazis. They must be remembered. However, there exists a moral imperative for special emphasis on the six million Jews. While not all victims were Jews, all Jews were victims, disdained for annihilation solely because they were born Jewish,” wrote the commission.

This approach clashed with Carter’s views on the universal lessons of the Holocaust. It also aroused the opposition of representatives of other victims of the Nazis, such as the Roma and the gay community, who pressed for inclusion in the Holocaust museum.

A ‘Campaign to Remember’

Another heated debate was taking place about who should pay for the museum, which was estimated to cost $100 million.

The land allocated on the National Mall in Washington, D.C., was a contribution by the federal government. But the remaining funds to build the museum were to be donated mainly by the American public through a “Campaign to Remember.”

This was the moment – the convergence of Carter’s vision of human rights protection and the “Campaign to Remember” – that the organized American-Armenian community believed could bring the almost-forgotten memory of the Armenian genocide back to public consciousness. 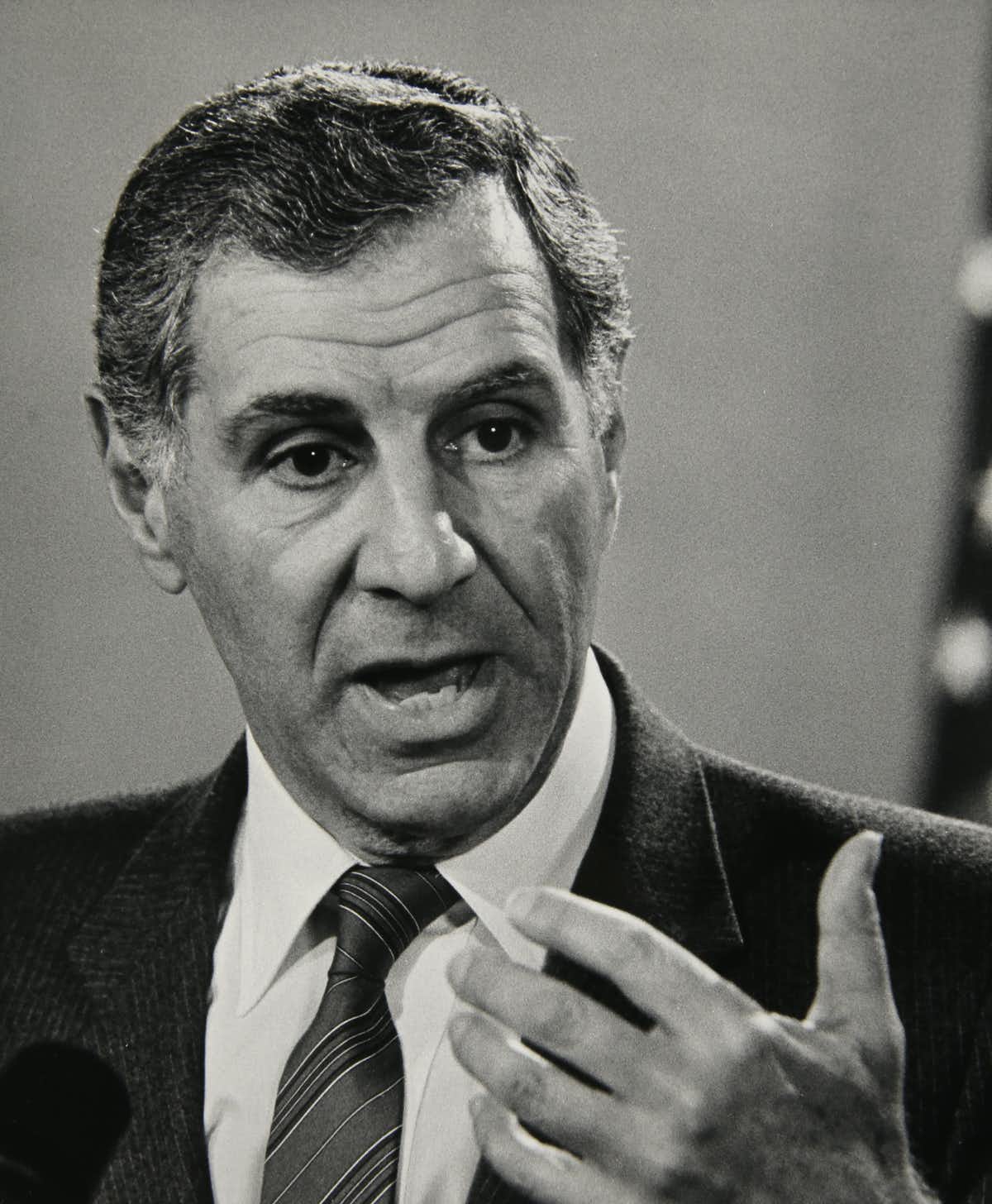 California Gov. George Deukmejian, an Armenian-American, pressured museum leaders to appoint Set Momjian as its American-Armenian community representative. The Armenian community in the U.S. made a donation of $1 million, aiming to be able to include the Armenian genocide in the museum’s focus.

In August 1983, the Armenian expectations became reality when the museum commission reached a decision to include the Armenian genocide in the exhibition narrative. Although the decision about the 1915 genocide was informal, it was still a commitment that later would be difficult to reverse.

The Turkish government was extremely anxious about the museum. It turned for help to its regional and Cold War ally, Israel. Turkey pressured Israel to influence the concept of the museum and to make sure the Armenians were left out of the memorial.

As part of an oral history project, I interviewed Gabi Levy, who served as Israeli ambassador to Turkey from 2007 to 2011. Levy told me that throughout the history of Israeli-Turkish relations, whenever Turkey had an urgent concern in the U.S., “the Turks carried assumptions regarding the ‘magical power’ of Israel’s foreign policy,” especially their purported ability to use the American Jewish lobby for influence the U.S. political arena.

Israel capitalized on presumptions about the Israeli/Jewish “magic power” to convince Turkey that they were taking all “possible measures.” Israeli diplomats tried to persuade the relevant American players to prevent the Armenian experience from being incorporated into the museum, requesting influential Jewish congressmen such as Tom Lantos and Stephen Solarz to convince the museum commission to exclude the Armenian genocide. Lantos and Solarz believed this would serve U.S. interests in the Middle East that included Israel and Turkey maintaining good relations.

When the memorial finally opened its doors in 1991, its focus was the Holocaust and Jewish victims.

Internationally, a number of developments supported the dramatic changes in U.S.-Turkish relations in 2019. They include Turkey’s July purchase of a Russian-made air defense system, which angered the Americans, and the October military offensive by Turkey in Northern Syria against the Kurds, who were U.S. allies. 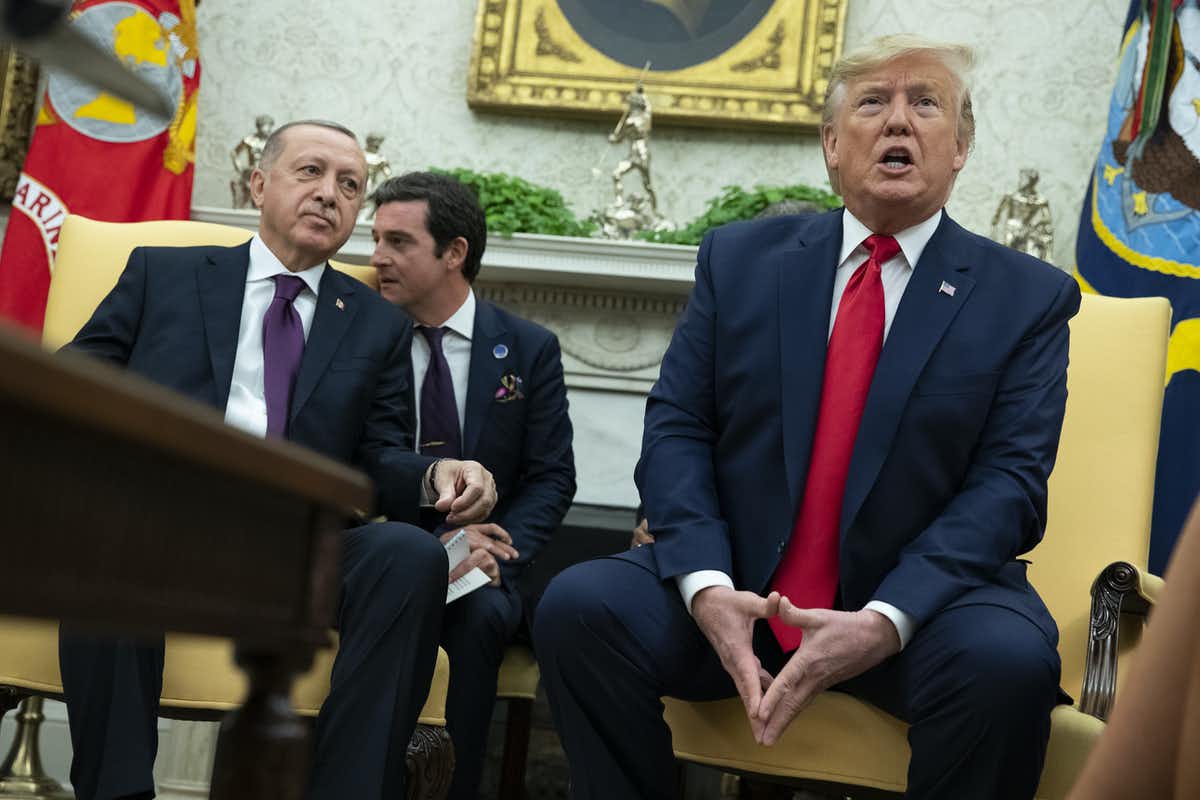 In the U.S., the unprecedented condemnation by both Democrats and Republicans of Turkish President Recep Tayyip Erdoğan for his attack on Kurds in Syria, as well as the impeachment process against Erdogan ally Donald Trump, weakened Congress’ adherence to the longtime official position favoring Turkey.

Congress passed powerful sanctions against Turkey. The Armenian genocide bill was part of the package.

Importantly, the bill passed by the U.S. Congress states the U.S. will “commemorate the Armenian Genocide through official recognition and remembrance.”

The U.S. is thus committed to allocate federal resources to build a U.S. memorial to commemorate the 1915 genocide – just as with the 1978 President’s Commission on the Holocaust. Practically speaking, building a U.S. Armenian genocide museum or memorial will have further negative implications for U.S.-Turkish relations, which might take another 40 years to rebuild.

Editor’s note: This is an updated version of an article originally published on March 20, 2020.

Shortage on a Stick: More Swabs on the Way, but That Won’t Solve California Test Gap