When will Californians emerge from house confinement? What will life look like?

In a roadmap unveiled Tuesday with top public health officials, Gov. Gavin Newsom said he will not lift his shelter-in-place order until adequate suppression and mitigation measures are in place to prevent future flare-ups. That means tracking down the sick and isolating clusters of new infections, arming hospitals with adequate equipment and setting new guidelines for schools and businesses to reopen.

In short, it might be a while. The governor told reporters not to even ask him about the timeline until hospitalizations and intensive care caseloads begin to drop. To his point, Monday marked California’s deadliest day so far with 71 deaths for a total of 758 lives lost.

“In two weeks, if we see a continued decline, not just flattening, but a decline … ask me then,” Newsom said.

Nearly four weeks in with signs that a state lockdown was slowing the spread of the coronavirus, the governor offered a glimpse of post-pandemic life where restaurants check temperatures at the door, servers in masks offer disposable menus and diners sit at tables spaced 6 feet apart. And until most of the population is immune to the virus and a vaccine is available, Newsom said, mass gatherings such as music festivals and sporting events are “not in the cards.”

California is not alone in taking a conditional approach. Despite President Trump’s enthusiasm for opening the economy as quickly as possible, Anthony Fauci, director of the National Institute of Allergy and Infectious Diseases, said that the country was “not there yet.”

What it suggests is that this is not the end of the pandemic, but only the end of its chaotic and deadly beginning.

Calls to Reopen the Economy Have Been Growing Louder

“This time period we are entering is not about going back to where we were before,” said Department of Public Health Director Sonia Angell. “It won’t look the same.”

With the number of new cases each day appearing to fall in some pandemic hotspots, calls to reopen the economy have been growing louder.

But the economy isn’t likely to rebound by executive edict alone. A recent Ipsos poll estimates that 70% of Americans view going to the grocery store as a highly or moderately risky activity. People can only be expected to resume business-as-nearly-usual when they are convinced it is safe to do so.

California’s economic prognosis is already grim. Forecasters at the University of the Pacific project an 18.8% unemployment rate for California in May — up from a 2019 average of just 4%. One third of the expected job losses are concentrated in the typically low-wage food service sector.

And the state is forecasting a 61% drop in tax collections between April and June, which includes the busy tax filing season.

Before lifting the lockdown, there is plenty of work to do — and plenty of details to fill in.

The Newsom administration outlined criteria to modify the shelter-in-place order: the state will need to develop the ability to test, track and isolate those who are sick; to make sure that hospitals are ready to handle any potential fresh outbreaks; to ensure that businesses are able to operate with new social distancing guidelines; and to monitor new cases.

How do we defrost the economy while keeping the virus in check?

“We have to have the logistics in place to be able to identify small brush fires in the community and extinguish them before they become raging wildfires,” said Jeffrey Martin, a professor of epidemiology and biostatistics at the University of California, San Francisco. 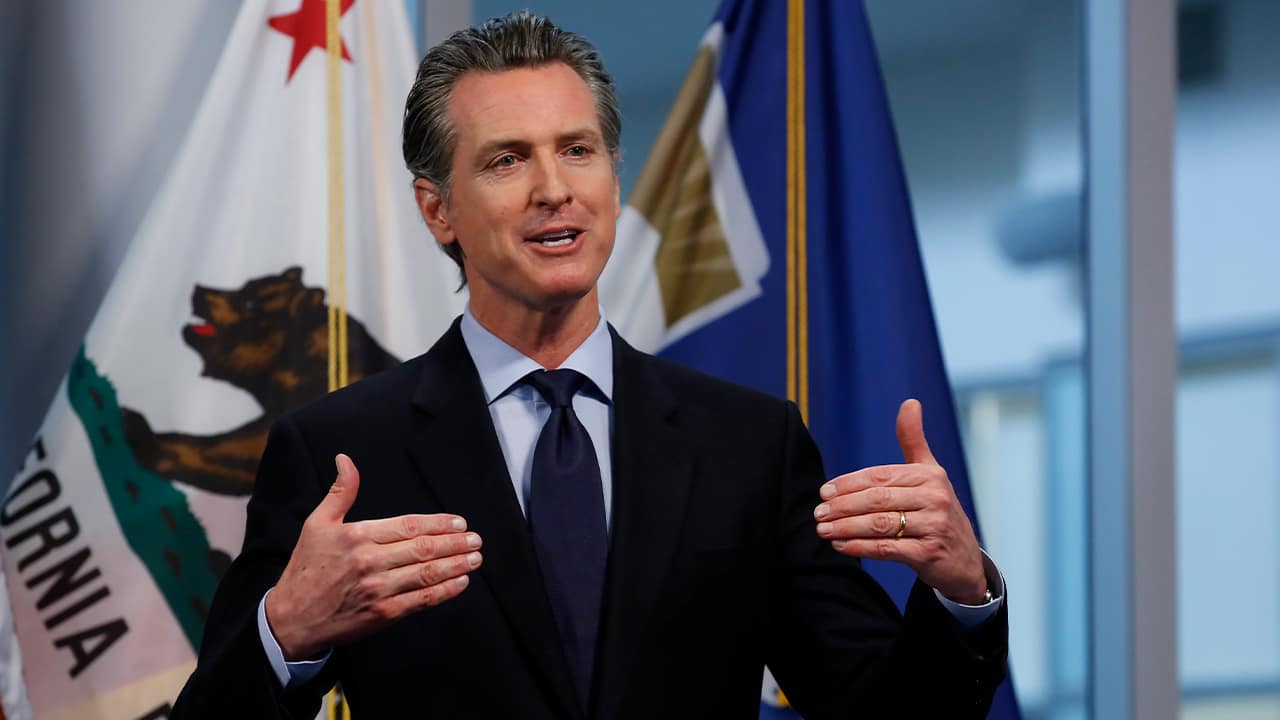 In practice that means, at the very least, there has to be much more testing.

But even as California’s test count climbed to 215,400 tests as of April 13, another 13,200 people were still waiting on results. On April 4, Newsom announced a new partnership with UC Davis and UC San Diego to create “a minimum of five to seven hubs where we have high-throughput.”

One of the hubs is at UC Davis but the state Department of Public Health would not identify other hubs or how many tests they’re running.

Parts of California remain desperately short of testing supplies — such as Placer County, home to the first person to die of the novel coronavirus in the state. The county has only about 40 kits for collecting specimens left.

“They have been essentially impossible to find,” Sisson said. “It means that I don’t get to test everybody who I would like to test.”

There Are Different Ways to Accomplish All of This

Even if adequate testing shows the rate of new cases slowing, the task of limiting new infections will continue. That requires gathering, analyzing and sharing vast quantities of testing data. It will also mean identifying new infections as soon as they occur, figuring out a way to isolate the new patient, and identifying and quarantining their recent contacts, too.

There are different ways to accomplish all of this, and none are easy. Madera County, for instance, typically has two to three people to investigate potential exposures to infectious diseases like tuberculosis and sexually transmitted infections. But with the coronavirus pandemic, the county has leaned on sheriff’s deputies and probation investigators to bolster their team.

In South Korea, citizens who have been infected have been required to download an app that tracks where they’ve been and who they might have infected. In their pandemic recovery report, researchers at the Center for American Progress recommend that the United States develop some version of the app. But they acknowledge that a more “civil-liberties-sensitive solution” would have to be adopted.

Google and Apple recently announced plans to develop a similar contact tracing system that uses the Bluetooth on people’s phones to track when people get close to one another. The idea is that public health officials could use this data to track potential contacts via their own apps.

But between the potential for false positives and concerns about privacy, it seems unlikely an app can replace the people needed to do the work.

“App or no app, the vital work needs to be done by trained public health professionals at the local level who are trained in privacy concerns and conduct thorough and confidential contact investigations,” said Kat DeBurgh, executive director of the Health Officers Association of California.

Newsom agreed. While the state is vetting apps, he said, “we have to supplement that technology with the workforce.”

Prior to the Pandemic, an Allusion to Building Walls Would Have Been an Obvious Dig at President Trump

To that end, Newsom said the state is training “thousands of individuals” working with AmeriCorps and California Volunteers as well as existing state staff to bolster California’s capacity to identify people infected with the novel coronavirus, and trace their potential contacts.

President Trump said Monday that the decision to reopen each state’s economy was his to make, asserting “when someone is president of the United States, their authority is total.” Tuesday, he modified his response amid a report that federal officials drafted a national plan for getting back out.

California’s roadmap is part of a regional partnership with Oregon and Washington. The Western States Pact is meant to provide a shared framework for relaxing social distancing mandates and to start reviving each state’s economy.

“This virus knows no boundaries, knows no borders. You can’t build walls around it,” Newsom said Monday.

Prior to the pandemic, an allusion to building walls would have been an obvious dig at President Trump, Newsom’s chief ideological foe and a frequent Twitter sparring partner. Since the beginning of the crisis, the two have been remarkably cordial, regularly swapping praise.

But the formation of these pacts is itself an acknowledgment that the federal government has yet to offer an overarching lockdown policy or guidance.

President Trump said Monday that the decision to reopen each state’s economy was his to make, asserting “when someone is president of the United States, their authority is total.” Tuesday, he modified his response amid a report that federal officials drafted a national plan for getting back out.

“They know when it’s time to open and we don’t want to put pressure on anybody,” Trump said. “I’m not going to put any pressure on any governor to open.”