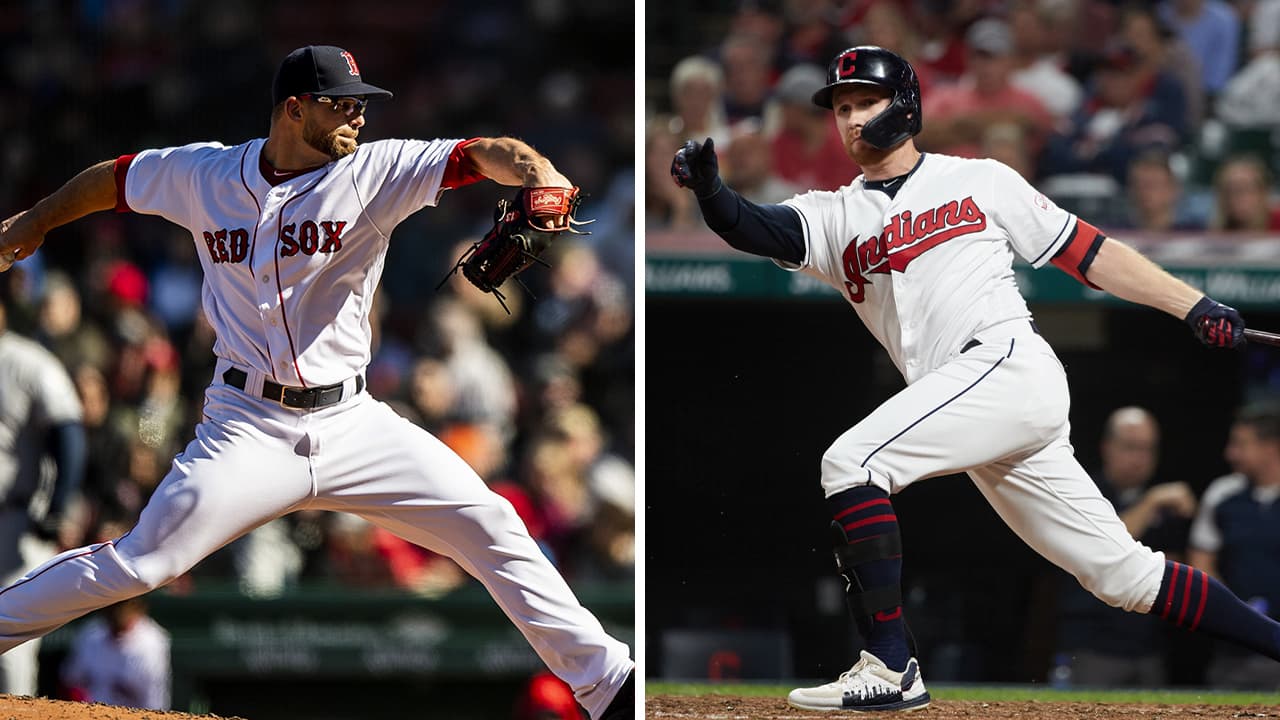 “Take Me Out the Ballgame” has a different meaning right now for two Fresno-area native Major League Baseball players.

Jordan Luplow and Marcus Walden both launched their baseball careers at local high schools and colleges.

“I try to treat it like a January, just before spring training gets going. You start to throw and hit again, your lifts pick up.” — Jordan Luplow

Now, they’re keeping in baseball shape on opposite coasts, hoping to return to the diamond soon. They’re also practicing informally with nearby teammates.

Teams shut down their spring training facilities in mid-March and sent players home. There is no plan to resume the season, although many ideas have been floated. 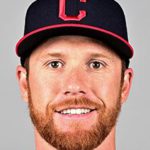 Luplow, a Clovis native who played at Buchanan High School and Fresno State, is an outfielder for the Cleveland Indians. He is waiting and training at his San Diego-area home.

“You’re not able to use the beach right now, though. But, the winter weather is pretty nice,” Ludlow said.

After debuting with Pittsburgh in his fifth professional year in 2018, the 26-year old  Luplow was traded to Cleveland, where he batted .276 in 85 games last season.

Luplow is training in his friend’s backyard, lifting weights and hitting from the batting cage.

“I’m just gonna keep it a super small … kind of confined area by ourselves so we don’t run into other people,” Luplow said.

“I try to treat it like a January, just before spring training gets going. You start to throw and hit again, your lifts pick up. Everything gets firing off on all cylinders, but you’re not fully ramped up yet,” Luplow said. 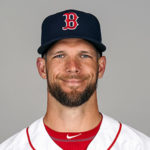 Walden, a reliever with Boston, bought a home last year at his team’s spring training town of Fort Myers, Florida. He remained in the Sunshine State with his wife Nichole and two young daughters, Sutton and Palmer, during the shutdown.

After he played at Central High School and a year at Fresno City College, Toronto drafted Walden in 2007. It’s been a long road for Walden to reach the majors.

After seven seasons with the Blue Jays organization — including sitting out 2010 for Tommy John surgery — Walden made the big league roster in April 2014 but did not appear in any games.

He spent the next five seasons sticking in the minors with four organizations: Oakland, Cincinnati, Minnesota and finally signed a minor-league deal with the Red Sox for the 2017 season.

Working Out While Facility Closed

Walden is working out with his small circle — including Red Sox pitching teammates Colten Brewer and Jeffrey Springs.

“They are garage workouts. We got our kettlebells … and bands, just trying to get the workouts in,” Walden said. The team has provided recommendations with the equipment available.

Walden is working on his short and long toss.

“We’re literally playing catch in the middle of the road from my house. It’s not like we’re going anywhere,” Walden said.

If Walden was at home, he would likely train at DIB Baseball Academy in west Fresno, of which he is a part-owner. A small group of pros in the Fresno area is training there while practicing social distancing.

A Normal Spring Training Until …

The COVID-19 pandemic caught both players off guard when teams shut down spring training.

“It sucks. It was a tough pill to swallow,” Luplow said when the Indians closed their facility on March 19.

“They are garage workouts. We got our kettlebells … and bands, just trying to get the workouts in.” — Marcus Walden

The Red Sox had an off day when the news came down. Walden was golfing with teammates Brewer, Kevin Plawecki, and Andrew Benintendi.

“We’re talking about it, saying ‘I don’t think this is really going to happen.’ About the time we got home from the golf course, it had all been shut down. We canceled spring training,” Walden said. “So it was kind of  was a weird situation for us because we weren’t with our team at the time of this all happening.”

Getting Back in the Swing of Things

Spring training is a time for young players to prove to their clubs they belong.

Luplow is confident in his role with Cleveland, despite the team having 10 outfielders on its 40-man roster.

“I’m on the same page with the front office and (Manager Terry) Francona,” Luplow said. “I’ve earned my role and hopefully continue to do it and do it well so I can earn a bigger role.”

Luplow is not worried about roster decisions, letting his play on the field speak for itself.

Walden doesn’t take anything for granted.

“You got to earn it every year. But your job is, I think, zero security until you get to arbitration, which I’m still two years away from,” Walden said. Arbitration is a method baseball uses to determine salaries for players with three years’ experience, but less than six years when a player can become a free agent.

“That’s something I’ve learned, obviously a long time in the minor leagues. I think it’s a good idea and a good thought process to have going into every camp,” Walden said. 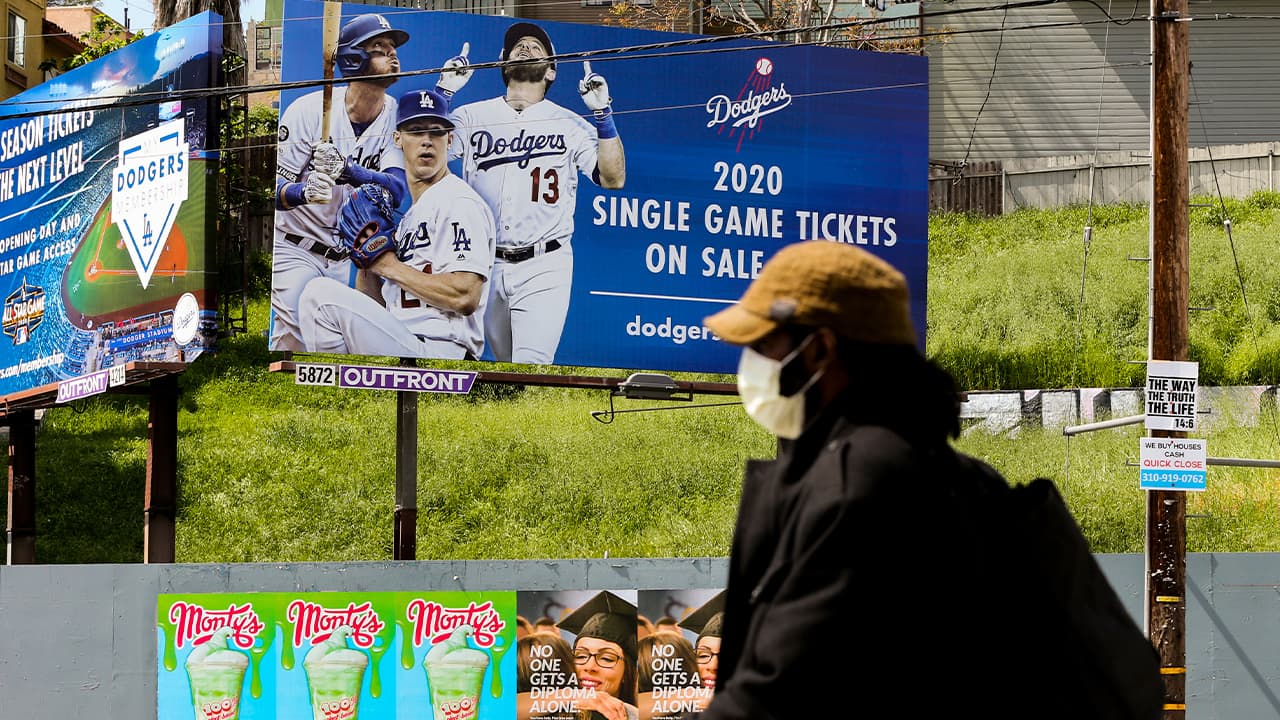 A pedestrian wears a hat and a face mask on Sunset Blvd., in the Echo Park neighborhood of Los Angeles, Thursday, April 2, 2020. Major League Baseball opening day was to have been Thursday, March 26, but has been delayed because of the coronavirus outbreak. The spring training schedule was cut short on March 12 because of the pandemic, and it remains unclear when and if baseball can resume. (AP File/Damian Dovarganes)

Not being able to go out while training is tough, but Luplow is making do.

“There’s plenty of Netflix or video games to keep me entertained for a while.  So I think I’ve been doing all right,” Luplow said.

“We are to stay home or safer at home (according to Florida regulations). A lot of things are closed down, just like back home in Fresno,” Walden said. “Everything is either take-out or they are closed up for the most part. But now we’re doing all right.”

Opening Day for the 2020 season was supposed to be March 26. Nearly three weeks later, there is no definitive date to restart.

Major League Baseball and its players union agreed to a deal where players would be partially compensated, based on salary and experience. Luplow and Walden would be at the lower end of the scale.

“We want to play as many games as we possibly can and have playoffs. Obviously that means we all get paid,” Luplow said.

“I could live off of the money (I already have). If we don’t have a season, if we know that’s what we’re getting, I could pay my bills with it. Obviously, I’m not going to go on vacation. Financially, we’re doing all right,” Walden said.

Neither player said they knew when baseball will resume. They hope to be ready whenever they get that call.

Groundwater Might Be Newest Cash Crop for Valley Farmers