Stanford Medical Center and digital manufacturer Carbon have teamed up with several other universities on a project to 3D print millions of COVID-19 test swabs for medical facilities.

Carbon will announce plans to scale up production of the critically-needed testing item on Wednesday, according to a release sent to GV Wire.

On Saturday, Governor Gavin Newsom praised “Stanford’s ingenuity (which) includes current testing of new 3D printing protocols.” “We’re just blessed to have all of these academic institutions and medical labs in the state of California,” Newsom said at a news conference. 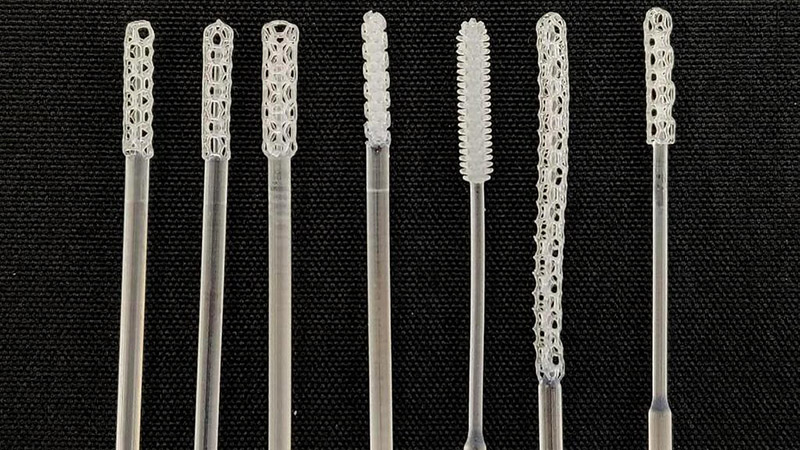 One Million Swabs a Week

Redwood City-based Carbon can produce 1-million or more nasopharyngeal swabs a week, based on need, the release said. The swab is made from a resin material and utilizes a lattice style design, common in 3D printing.

The swabs are used to collect nasal and throat specimens from patients and have been in short supply during the COVID-19 outbreak.

In addition to Stanford, others that assisted with the development effort were Harvard Medical School, Beth Israel Deaconess Medical Center, Desktop Metal, Chan Zuckerberg BioHub, and the University of North Carolina at Chapel Hill.

The release also said shoe company Adidas is supporting Carbon’s production of PPE face shields for U.S. healthcare workers and first responders at the epicenter of COVID-19 breakouts. The PPE face shields will use the same material Carbon and Adidas co-created for their 4D-printed footwear collaboration.

Carbon has made the face shield design open-source and available on the company’s website. That allows anyone with access to a Carbon printer and materials to create them.

Healthcare workers at Stanford Hospital and Kaiser Permanente have provided Carbon with feedback on the face shields.

Like most states, California has struggled to define the scope of the virus outbreak because of a lack of testing. On Saturday, Newsom said the Golden State is “turning the page on our old approach.”

He announced new partnerships with University of California campuses in Davis and San Diego to set up between five to seven testing hubs. Plus, he said Illinois-based Abbott Laboratories had committed to setting up 75 testing sites throughout the state.

Newsom said researchers at Stanford University were close to getting approval for an antibody test that would tell not just whether someone has the virus, but also if they are immune. A spokeswoman for Stanford’s School of Medicine said one test is being performed as part of a study and another will be launched in its lab shortly.

Just a few weeks ago, the FDA issued new guidance on the use of swabs for COVID-19 testing.

On their website, the FDA says, “Based on available data, FDA believes that, for symptomatic patients, nasal swabs could be used that access just the front of the nose rather than the depth of the nasal cavity. This would provide COVID-19 testing that is more comfortable for patients, allows self-collection of specimens at collection sites, and that can be performed with a simpler and more readily available swab.”