Gov. Gavin Newsom said Monday he would close parking lots at dozens of beaches and state parks to prevent the spread of coronavirus after large groups flocked to the coast and mountains to get outdoors on the first weekend under the state’s stay-at-home order.

“Normally that would light up my heart to see tens of thousands of people congregating down in Malibu and other parts of our beautiful state. One cannot condemn that, but one can criticize it. We need to practice common sense and socially distance.” — Gov. Gavin Newsom

Newsom reaffirmed he wants to continue using social pressure, not police enforcement, to get people to maintain safe spacing. But with some parks seeing record number of visitors under sunny skies this past weekend, he said the “soft closure” was intended to “help you help yourself.”

“Normally that would light up my heart to see tens of thousands of people congregating down in Malibu and other parts of our beautiful state,” he said. “One cannot condemn that, but one can criticize it. We need to practice common sense and socially distance.”

The outbreak is affecting all areas of government, a reality underscored by Chief Justice Tani Cantil-Sakauye on Monday ordering a two-month suspension of all trials in California superior courts.

In contrast to President Donald Trump’s projection that the crisis and its impact on the economy would last weeks rather than months, Newsom is planning for a 90-day surge of cases. He said new calculations show California could need up to 50,000 more hospital beds. 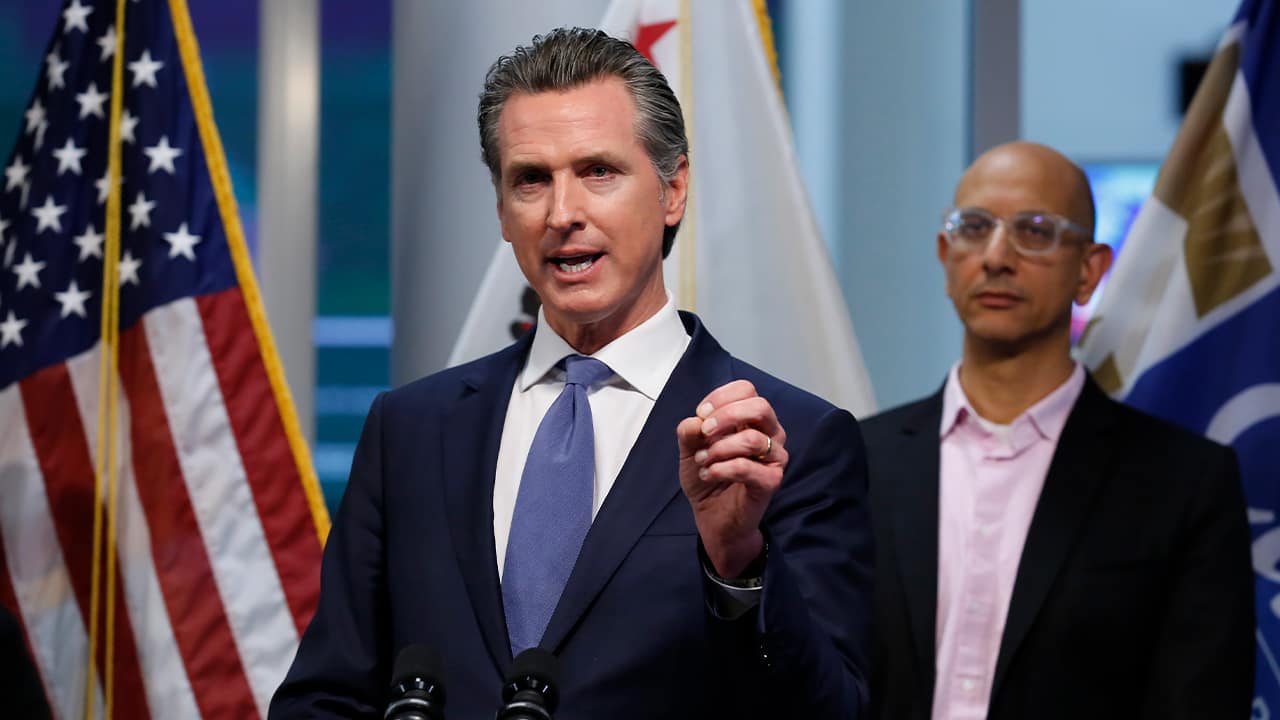 Gov. Gavin Newsom give an update to the state’s response to the coronavirus, at the Governor’s Office of Emergency Services in Rancho Cordova on March 17. At right is California Health and Human Services Agency Director Dr. Mark Ghaly. (AP Photo/Rich Pedroncelli)

Working With Other Governors to Strategically Leverage Buying Power

“We clearly are operating under a different set of assumptions,” Newsom said. But, he said, the many conversations he’s had with Trump and the “significant support and resources” California is receiving alongside Washington and New York “suggests an understanding, very directly by the president himself, of the unique challenges we face in our states.

“I have no trepidation that whatever he decides to do from a national prism will get in the way of our efforts here at the state level,” Newsom said

The Democratic governor touted public-private cooperation to bring in medical supplies and open new hospital beds, including a Navy hospital ship destined for Los Angeles and two Army field hospitals opening in Riverside and Santa Clara counties. Six more are planned and the eight field hospitals will be able to serve 2,000 patients.

Newsom discussed working with other governors to strategically leverage buying power for supplies while making sure California doesn’t exploit its size at the expense of smaller states that may have difficulty obtaining equipment.

He said California needs to procure hundreds of millions of rubber gloves, gowns and surgical masks and face shields for healthcare workers to protect themselves during an anticipated three-month surge in treating patients with the virus. Among other things, he said the state would be chartering flights from China with gear and had heard from companies that wanting to use 3-D printers to make surgical masks.

“We’re talking in the magnitude of tens of millions, in some cases hundreds of millions of units, of personal protective gear,” he said. “It’s going to take an heroic effort.”

Newsom said he would consider waiving some graduation requirements for fourth-year medical students and nursing students who were doing clinical rotations when the outbreak arrived to more quickly get them into the field.

California has 75,000 hospital beds, but Newsom said Monday it needs to find 50,000 more to deal with a potential surge of coronavirus patients, as well as staff to treat those extra patients.

He said he would consider waiving some graduation requirements for fourth-year medical students and nursing students who were doing clinical rotations when the outbreak arrived to more quickly get them into the field.

“We definitely have a sense of urgency,” Rotruck said. 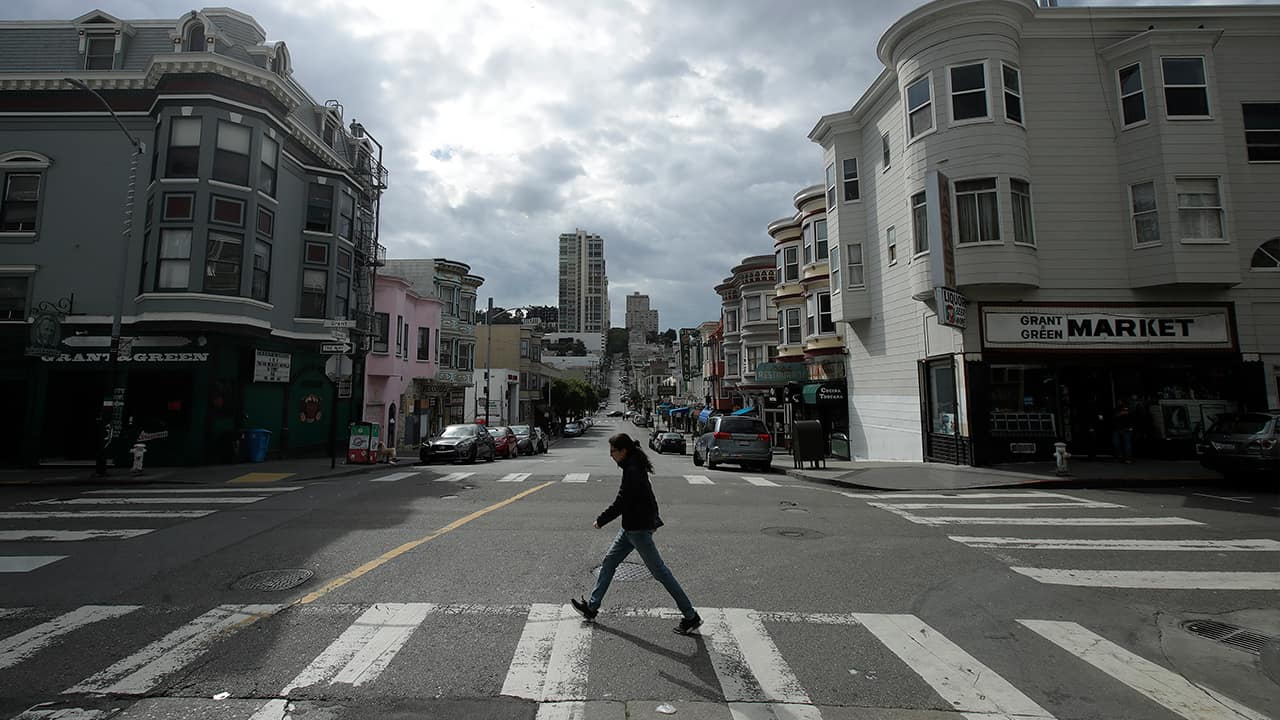 A man walks alone while crossing Green Street in the North Beach neighborhood of San Francisco on Saturday. Some 40 million Californians are coping with their first weekend under a statewide order requiring them to stay at home to help curb the spread of the coronavirus.(AP Photo/Jeff Chiu)

Earlier in the day, Los Angeles officials announced plans to expand coronavirus testing, promising up to 5,000 tests a day by Friday, significantly ramping up an effort that has lagged nationwide amid the outbreak.

“The U.S. has fallen behind other nations in response to this pandemic,” City Councilman David Ryu said. “We need to take action ourselves. Los Angeles is not going to wait around.”

Newsom’s stay home order allowed residents to exercise, but he said they tested the limits by packing trails, bike paths and beaches over the weekend and not observing a 6-foot buffer from others.

Local officials had already moved to close parking at the state’s best-known beaches in Malibu, Santa Monica, Los Angeles, San Diego and San Francisco to curb crowds. Parks in scenic Marin County, north of San Francisco, were closed and access was restricted to many of the trails in the Santa Monica Mountains that run through Los Angeles County.