TOKYO — The Tokyo Olympics are probably going to happen, but almost surely in 2021 rather than in four months as planned.

“I know that this unprecedented situation leaves many of your questions open. I also know that this rational approach may not be in line with the emotions many of you have to go through.” — International Olympic Committee President Thomas Bach

That became clear after the IOC on Sunday announced it was considering a postponement and would make a final decision within four weeks. Major Olympic nations like Canada and Australia have added pressure by saying they will not send teams if the games are staged this year.

International Olympic Committee President Thomas Bach sent a letter to athletes explaining the decision, while also acknowledging the extended timeline might not be popular.

Shortly after Bach’s statement, the Canadian Olympic Committee said it would not send athletes to the Olympics unless the games are postponed by a year. Australia issued a statement saying it was advising its athletes to prepare for an Olympics in 2021.

John Coates is the head of the Australian Olympic Committee and the IOC member who heads the inspection team for Tokyo. 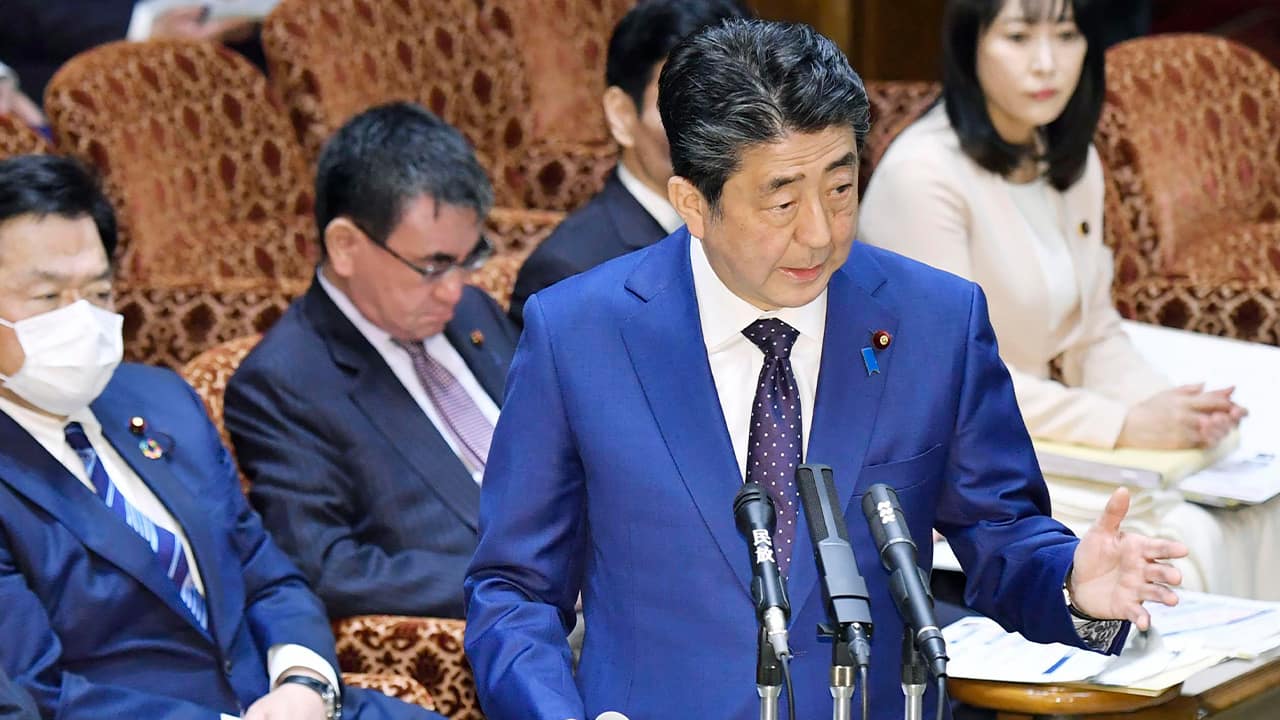 Japan’s Prime Minister Shinzo Abe speaks at a parliamentary session in Tokyo Monday, March 23, 2020. Abe said a postponement of Tokyo Olympics would be unavoidable if the games cannot be held in a complete way because of the coronavirus pandemic. (Yoshitaka Sugawara/Kyodo News via AP)

World Athletics President Sebastian Coe sent a letter to Bach saying that holding the Olympics in July “is neither feasible nor desirable.” He outlined a number of reasons, including competitive fairness, the likelihood athletes would overtrain if given a compressed schedule and the uncertainty caused by orders in many countries barring people from gyms and other workout venues.

National Olympic committees in Brazil and Slovenia had also called for postponement until 2021. Norway’s Olympic body said it did not want athletes going to Tokyo until the global health crisis is under control.

The United States governing bodies of swimming and track — two of the three top-tier Summer Games sports — had called on their national Olympic officials to push for a postponement.

Japan’s politicians fell in line quickly on Monday as they awakened to Bach’s move, which was announced at 3 a.m. in Tokyo as most of the city slept.

Japanese Prime Minister Shinzo Abe, speaking at a parliamentary session, said a postponement of the Tokyo Olympics would be necessary if the games cannot be held in a complete way because of the coronavirus pandemic.

“If it is difficult to hold (the games) in a complete way, a decision of postponement would be unavoidable,” he said.

Abe said he hoped the IOC would announce a decision quickly, and Tokyo Governor Yuriko Koike echoed him.

The IOC holds most of the cards in any rescheduling, spelled out in a Host City Contract signed in 2013 between the IOC, the Japanese Olympic Committee and the city of Tokyo.

Japan is officially spending $12.6 billion to organize the Olympics, but a national audit put the figure at more than twice that much. The bill is sure to increase with any postponement, and the vast majority of the spending if from the public treasury.

Both Were Asked About Added Cost, and Who Would Pay

The IOC has a reserve fund of about $2 billion to tide itself over, and also has insurance against postponement or cancellation.

“Honestly speaking, four weeks is quite a short time to consider all the necessary elements. It requires a tremendous amount of time and we have to hurry to go through this.” — Yoshiro Mori, the president of the organizing committee

Yoshiro Mori, the president of the organizing committee, said he talked with Bach by teleconference about the delay and was joined by CEO Toshiro Muto.

“Honestly speaking, four weeks is quite a short time to consider all the necessary elements.” Mori said at a Monday news conference. “It requires a tremendous amount of time and we have to hurry to go through this.”

Both were asked about added cost, and who would pay. And both shied away from a direct response.

Mori said cost calculations had to be made, and the availability of venues — presumably for next summer in the northern hemisphere — had to be examined. A decision also has to be made about who pays for the maintenance of venues if the Olympics are postponed.

Similar questions will be asked about the massive Olympic Village, which is to house 11,000 Olympians and 4,400 Paralympians before the high-priced units around Tokyo Bay are sold off by private developers.

“I respect Mr. Bach,” Mori said. “And we trust Mr. Bach. We have been always together walking side by side. I consider Mr. Bach as my best friend.”

The 82-year-old Mori, a former prime minister who has been undergoing treatment for an undisclosed illness, was asked if he could endure more work on the Olympics. 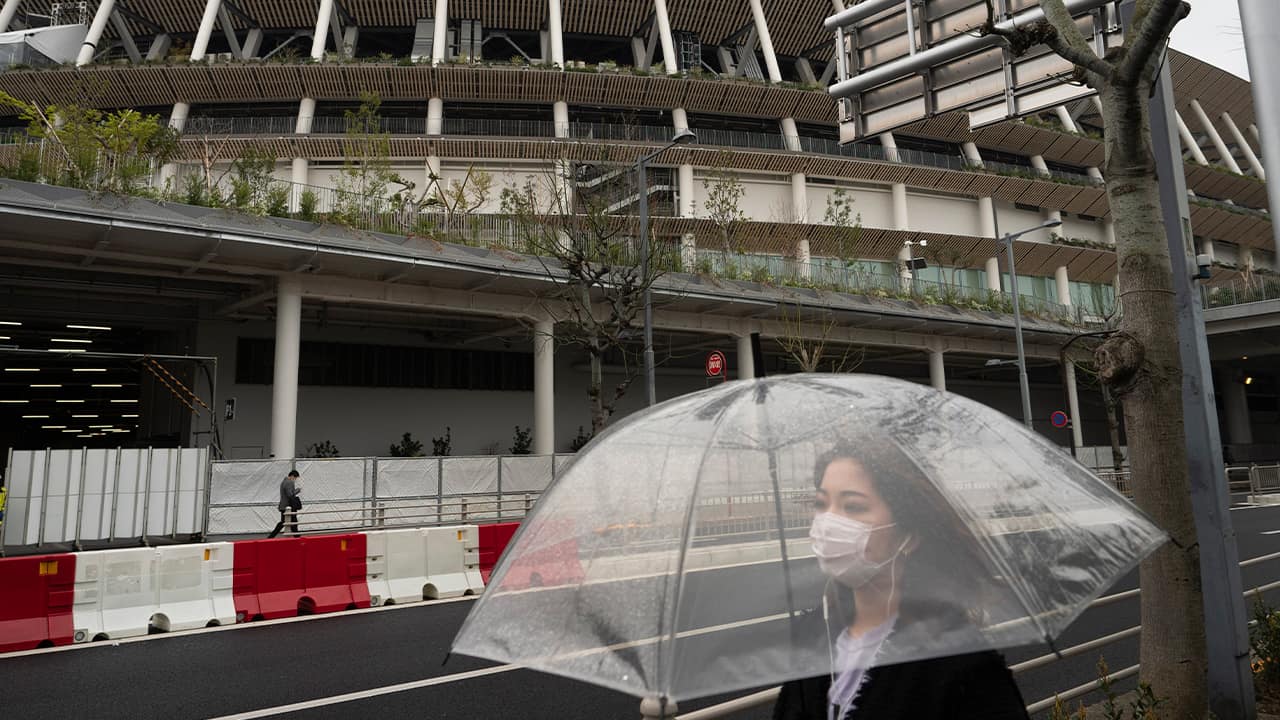 A woman walks past the New National Stadium, a venue for the opening and closing ceremonies at the Tokyo 2020 Olympics, in Tokyo, Monday, March 23, 2020. The IOC will take up to four weeks to consider postponing the Tokyo Olympics amid mounting criticism of its handling of the coronavirus crisis that now includes a call for delay from the leader of track and field, the biggest sport at the games. (AP Photo/Jae C. Hong)

On Sunday, Thousands Crowded the Northern City of Sendai to View the Flame

He called it a “rude” question.

“I’ve got about two years left to live,” he replied, half smiling as he said it.

The Olympic torch arrived last Friday in northern Japan from Greece. The torch relay it set to begin on Thursday from Fukushima prefecture, the area devastated by the 2011 earthquake, tsunami and the meltdown of three nuclear reactors. Organizers said the relay is still on, but said plans could change very quickly.

On Sunday, thousands crowded the northern city of Sendai to view the flame, which forced organizers the restrict the entry for viewing.

Jeff Kingston, who studies Japanese politics at Temple University in Tokyo, said postponed Olympics will be a minor worry for most people.

“The public is expecting and supports postponement, so it won’t be a big deal,” Kingston said in an email to The Associated Press. “People are way more worried about the economic consequences and their jobs and if the number of cases ramps up.”

A recent poll by the Japanese news agency Kyodo said 69.9% did not expect the Olympics to open on schedule.

Former IOC marketing director Michael Payne said the delay might work to the advantage of the IOC and Japan.

“What better platform is there going to be than the Olympic Games when the world has pulled through the virus,” Payne told the AP in an interview Sunday, just before the IOC announcement. “You’ve got a dynamic that will be even more powerful for Japan and the rest of the world. But you are going to have a tough road getting there.”