Citing a need to save lives and stay ahead of the curve on the worst-case COVID-19 scenarios, the city of Fresno imposed a shelter-in-place emergency ordinance Wednesday that goes into effect at 12:01 a.m. Thursday. 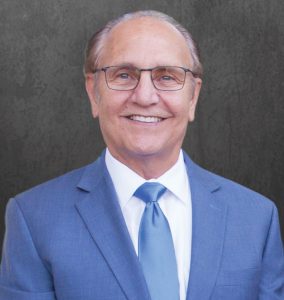 “We’re facing an unprecedented situation not only in Fresno but across the state, the nation, and the globe. I’d rather error on the side of caution. … This is really a life-or-death situation.” — Fresno Mayor Lee Brand

Under the extraordinary measure, Fresno residents will join at least eight million other Californians who have been ordered to stay at home and go outside only for food, medicine, outdoor exercise, and other essential needs.

It comes on the same day that President Donald Trump moved to invoke emergency authority to marshal industry to fight the coronavirus, as the economic fallout from the crisis mounted with word that Detroit’s Big Three automakers are shutting down their North American factories to protect workers.

The shelter-in-place order is set to remain in place until 11:59 p.m. Tuesday, March 31, but is subject to extension.

City officials said that they hope — and expect — that residents and businesses will comply voluntarily. 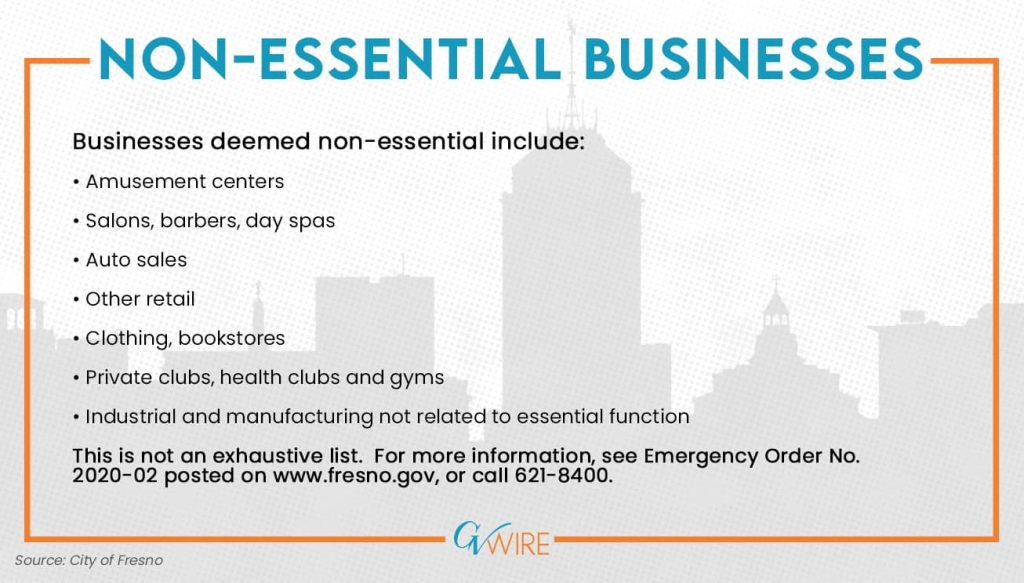 “We’re facing an unprecedented situation not only in Fresno but across the state, the nation, and the globe,” said Fresno Mayor Lee Brand in a press briefing that was embargoed until the announcement of the shelter-in-place ordinance. “I’d rather error on the side of caution. … This is really a life-or-death situation.

“I believe the vast majority of people will comply.” 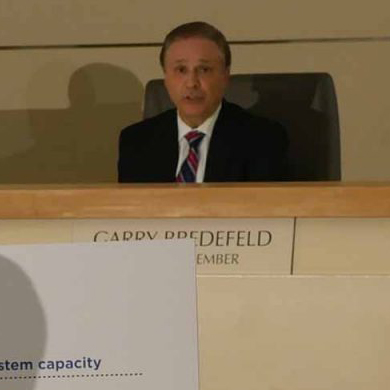 Citing an example of the cooperation that already is going on, the mayor said that some grocery stores already are reserving hours for seniors to shop. The city’s goal is to have at least one full-service grocery store in every council district set aside hours for senior shopping. The police department will provide security at those stores.

Bredefeld Does Not Support Shelter in Place

The council held an emergency meeting on Wednesday, its second such meeting this week.

A vote was not taken, as the city manager has the unilateral authority to declare a shelter-in-place emergency through powers granted by council on Monday.

Councilman Garry Bredefeld disagreed with the extent of the order, saying not enough data is in to make such a decision.

“We don’t shut down the entire country over (flu deaths). I understand this is different. This is serious. It’s a pandemic. We need to take it very serious. But it’s important not to live your life in fear,” Bredefeld said.

“This is serious. It’s a pandemic. We need to take it very serious. But it’s important not to live your life in fear.” — Councilman Garry Bredefeld

Bredefeld also questioned why shelter-in-place would not apply to the homeless.

“Why are we telling our citizens to be sheltered, but we’re letting our homeless —many who are involved in drugs and spreading disease — and they’re exempt? That’s completely unacceptable to me,” Bredefeld said. “They should not be all along our streets, outside our businesses, on the sidewalks and embankments while we’re telling people to stay home. That message is completely inconsistent with health, safety and welfare.”

Brand clarified that houses of worship can remain open, however they will be restricted to only 10 in a room at a time.

Other city officials said home worship centers have voluntarily limited services, holding them online only. Temple Beth Jacob in central Fresno announced it will not hold any services.

Fresno City Council President Miguel Arias echoed Brand, saying at the same briefing that “our actions will save lives” while also acknowledging “we know full-well the economic pain we will go through as a city.”

Both the mayor and Arias noted that many Fresno residents already have limited their activities in hopes of containing the virus, which has killed about 9,000 people worldwide — including 125 in the United States as of noon Wednesday.

“People should keep calm and not panic,” Brand said. “We’re going to get through this together. There is an end in sight.”

Though Brand expressed confidence that the city of Clovis would follow its lead and adopt a shelter-in-place ordinance, that city decided to keep things as is.

“The city of Clovis is not taking similar actions at this time and continues to follow the guidelines provided by the Fresno County Health Department on this and other matters related to COVID-19,” the city said in a news release.

Early Wednesday evening, Clovis issued another statement. This one said the city is immediately enforcing state guidelines directing the closure of:

Goal Is to Flatten the Curve: Arias 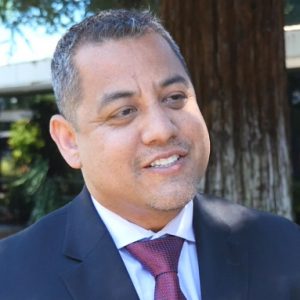 “We have so little testing capacity that we don’t want to wait for tests. We want to flatten the curve (rate of infection) now.” — Fresno City Council President Miguel Arias

Even though there have been only two confirmed COVID-19 cases in Fresno County, with neither resulting in death, Brand attributed those results to the test-kit shortage in the United States.

“We don’t really know how many people have it,” Brand said.

Added Arias: “We have so little testing capacity that we don’t want to wait for tests. We want to flatten the curve (rate of infection) now.”

Brand also said that he was initially skeptical about the dangers posed by the virus but changed his mind after talking to other big-city California mayors and healthcare experts. And, after seeing modeling that projected the exponential spread of the virus if it isn’t contained.

Arias said that Fresno is also at higher risk because it is a medically underserved area and faces the possibility of a high death toll if people don’t shelter at home and practice social distancing, which means maintaining a distance of 6 feet between individuals.

“We know this is going to be difficult for everyone, but the loss of life is irreversible,” Arias said.

The order comes as California has seen the number of confirmed coronavirus cases rise: at least 598 cases and 17 deaths as of Wednesday. That compared to 157 cases and three deaths the previous week. Nearly 12,000 people in the state are self-monitoring, the Los Angeles Times reported Wednesday.

Residents Can Still Do Many Everyday Activities

Under the ordinance, residents can still engage in many everyday activities such as going to the grocery store, picking up meals at drive-throughs, putting gas in their vehicles or having vehicles repaired, visiting a  hardware store, and getting medical treatment and medications.

They also are allowed to walk, hike, run, ride a bike or visit a park in groups of no larger than 10.

And, in fact, the city announced Wednesday morning that admission to Roeding and Woodward parks is free during the COVID-19 pandemic. But many city venues such as Selland Arena, Saroyan Theatre, Granite Park, and Storyland will remain closed.

“Expecting people to stay inside is unreasonable,” Arias said.

Exempted business include plumbers, electricians, exterminators, and other service providers providing services essential to safety and sanitation such as garbage haulers.

Laundromats and dry cleaners also can remain open. Childcare centers are exempt but most follow strict guidelines intended to reduce the risk of coronavirus exposure. And, media organizations can continue to operate without adhering to the in-shelter ordinance.

Pointing to Fresno’s role in “feeding the world,” councilman Luis Chavez said during the briefing that growers, packers, food processors, and truckers also are exempt from the in-shelter residence. 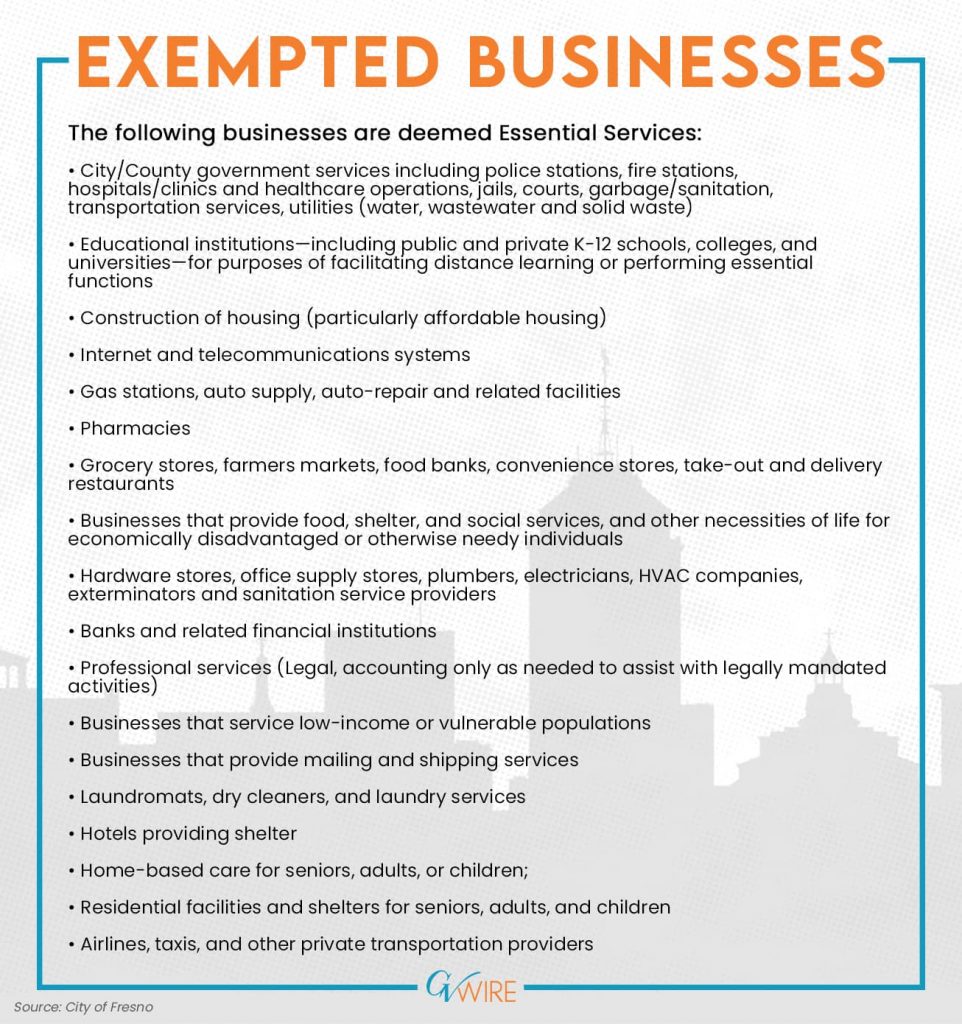 City officials also emphasized the financial assistance available to residents and businesses. For example, no one will have their city water and sewer service disconnected during the pandemic. And the state’s electrical and natural gas providers have said they won’t disconnect anyone, either.

Under federal, state and local edicts, foreclosures and eviction have been suspended — or will be suspended — on residential and commercial properties.

The waiting period for unemployment insurance has been waived, and the Small Business Administration has received the go-ahead to provide loans for businesses hurt by the pandemic.

Also, the White House pressed Congress on Wednesday to swiftly pass a potentially $1 trillion rescue package to prop up the economy and speed relief checks to Americans in a matter of weeks.

An extensive City Hall communications effort about the in-shelter ordinance and the pandemic is underway. The city will post the ordinance on its website in English, Spanish, and Punjabi, as well as answers to frequently asked conditions.

“We are taking this one day at a time,” Brand said. “If things change, we will get together and make” the necessary adjustments.

Read the Stay in Place Order

Read a city document, describing what can stay open, and what must close: