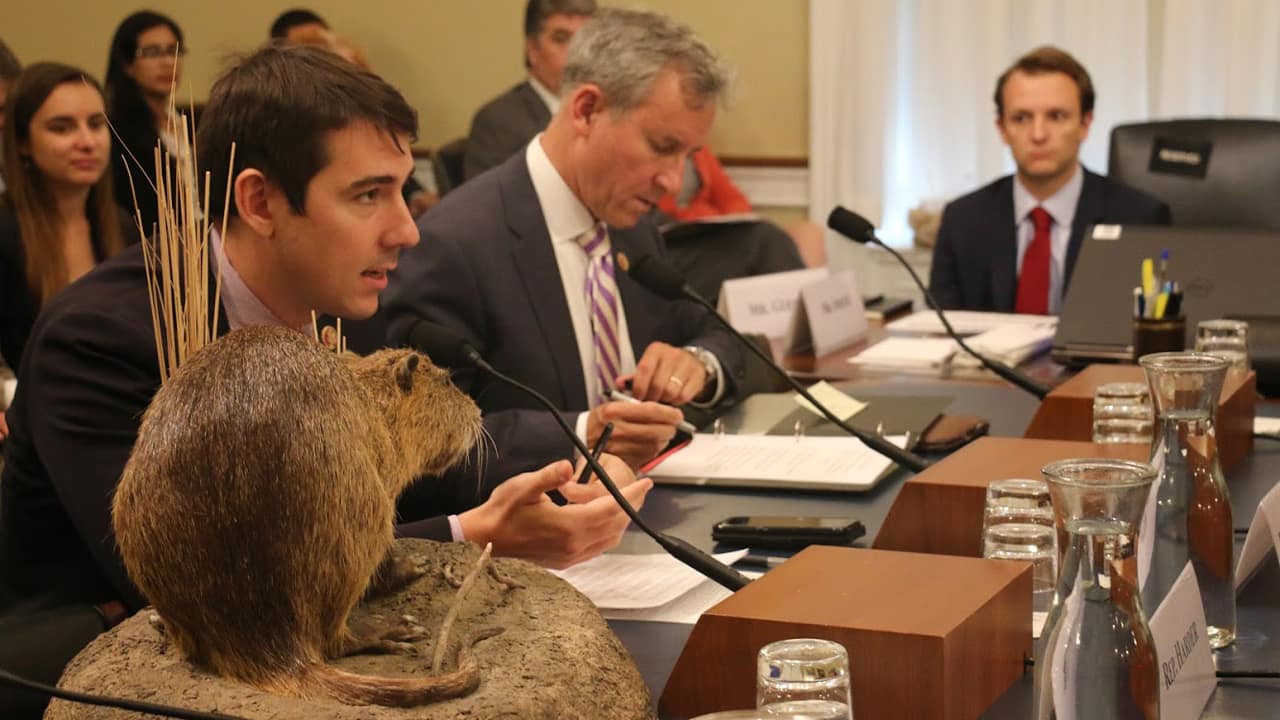 Rep. Josh Harder brought a stuffed swamp rat nicknamed “Nellie” to the congressional floor Wednesday.
And, the Turlock Democrat’s show-and-tell presentation worked to perfection.
The House, on a voice vote, passed Harder’s legislation to make $12 million available each year until 2025 to battle an invasion of nutria.
“Especially on agriculture issues, the biggest problem we have in Congress is getting awareness and understanding, so Nellie has been a great spokesperson,” Harder told The Modesto Bee. “Having something people can see and look at and know the scale of the problem is hugely helpful.”

Rep. Garret Graves, a Louisiana Republican, co-sponsored the legislation, About a dozen states are battling the rapidly reproducing voracious rodents.
“Nearly 4.5 million people live in Louisiana, yet we have an estimated 20 million nutria,” Graves said.
Louisiana recently upped the bounty for hunters who kill nutria from $5 to $6. The webbed-toed, buck-toothed rodents are in between the size of muskrats and beavers and are known for nibbling on tree roots, causing erosion to land and marshes.

California allocated $10 million in state money in 2019 to corral the burgeoning nutria population in the Central Valley. Officials used the funding for a team of 40 people dedicated to eradicating the rodents. Nearly 1,000 nutria have been killed since they were first spotted in Merced County two years ago.
Nutria are native to South America and came to the United States in the 20th century. Their fur was valued for coats and hats but a decline in the fur industry led to the release of nutria into the wild.
This bill does not grant the money but authorizes its use for nutria eradication, as well as wetlands and farmland restoration when Congress passes a budget.
Harder said he’s hopeful the money would be available later this year or in 2021.
The bill’s other co-sponsors were Reps. Jim Costa (D-Fresno), John Garamendi (D-Fairfield), TJ Cox (D-Fresno), Barbara Lee (D-Oakland), Ami Bera (D-Sacramento), and Jimmy Panetta (D-Salinas).

US Economy Grew at 2.1% Rate in Q4 but Virus Threat Looms