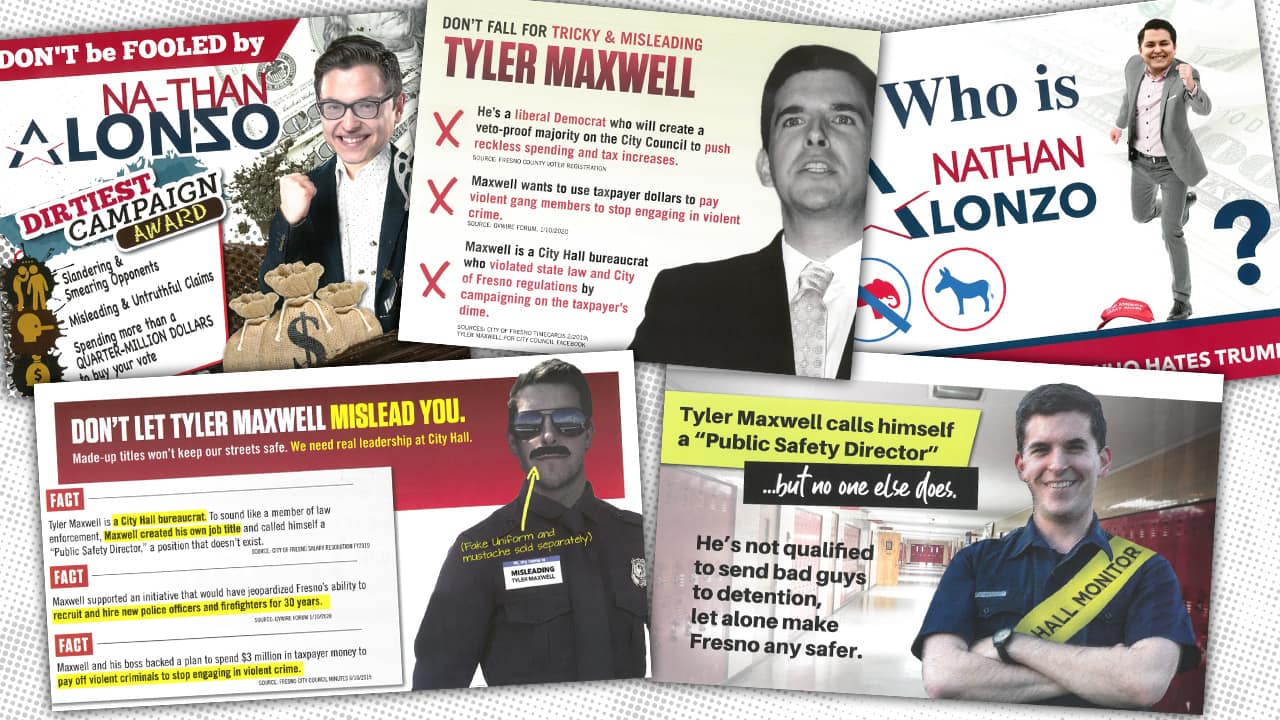 The Fresno City Council District 4 race has a week to go. After months of positive mailers from candidates Tyler Maxwell and Nathan Alonzo, things have turned nasty.
The days of smiling faces and images with family and concerned citizens are over.
Both are using less-than-flattering photos of each other, although Alonzo retorted on Twitter, “This is mailer is extremely misleading…I am definitely not that thin.”

This is mailer is extremely misleading…I am definitely not that thin. 🤔 pic.twitter.com/CUYOY6Peqr

Maxwell had a different take on Twitter, calling out Alonzo for deceptive mailers, even though he is using the same tactic.

My opponent, a life-long Republican, who was just endorsed by Devin Nunes, thought this was a good idea. I’m disappointed to see my opponent engage in this level of deception and scorched-earth politics. I will continue to focus on the issues that matter most to my community. pic.twitter.com/ghffzzsx7D

Alonzo’s mailers harp on Maxwell’s job title at City Hall, “Public Safety Director.” The mailers say that Maxwell is a “City Hall bureaucrat,” and “to sound like a member of law enforcement, Maxwell created his own job title and called himself a ‘Public Safety Director,’ a position that doesn’t exist.”
An image of Maxwell includes silly sunglasses and a mustache.
Another mailer from the pro-Alonzo Fresno Chamber of Commerce Independent Expenditure Committee calls Maxwell “a low-level bureaucrat,” and claims Maxwell is “pretending” to be a sworn officer.
The mailers are right that Maxwell has not ever been sworn police officer. He formerly was a civilian employee for the Fresno Police Department and now is a council aide for District 7 councilman Nelson Esparza.
During last month’s GV Wire forum, Maxwell was asked what a public safety director did. He said it stemmed from Esparza’s 2018 council campaign, where public safety was the top issue.
“We have to expand the way people think about what public safety is. And that’s part of my job at City Hall, is to look outside of the box and think of ways to bring the community together and make it safer,” Maxwell said.
He cited hosting community meetings with law enforcement officers and then pivoted to the importance of parks.

Maxwell’s campaign sent mailers out noting that Nathan Alonzo used to be a Republican, but now he’s not.
“Don’t be fooled: Nathan Alonzo is no conservative,” the mailer says with an image of Alonzo’s change of registration. And it’s true. Alonzo used to be a Republican. In 2019, he changed his registration to no party preference.
Maxwell is a Democrat, a fact omitted from the mailer.
Alonzo was asked about the registration change at the GV Wire forum.
“What we need at City Hall is a leader that can get things done and somebody who can bring people that are Republicans, Democrats, and independents to the table in order to be able to tackle the issues that face our city,” Alonzo said.
Alonzo noted that council members don’t have a party affiliation on their dais nameplate.
“I’m a person who can get things done. I have a track record of that. It doesn’t matter for me whether a person is a Republican or a Democrat. If they are a good, honest person with integrity, if they’ve got experience, if they’ve got a strategy for getting things done, that is what we need as far as a representative for our district goes. So that is what I look to be,” Alonzo said.
On Twitter, Maxwell criticized Alonzo for his Republican support.

Talk about misleading, my opponent is claiming he’s the Dem candidate. One of his phonebankers even called and told me he was a registered Dem and I’ve received similar accounts at the door. Now he is touting the endorsement of far right congressmen Nunes. pic.twitter.com/mNgDpLMOKW

Both candidates pointed the finger at each other for supporting 2018’s Measure P, the Fresno sales tax measure that would have supported parks. It did not pass.
“Maxwell supported an initiative that would have jeopardized Fresno’s ability to recruit and hire new police officers and firefighters for 30 years,” Alonzo said.
“Alonzo supports the largest tax increase in Fresno’s history. A whopping $75,000,000 in new sales tax for Fresno taxpayers,” Maxwell’s mailer states.
During the forum, Maxwell noted he supported Measure P, while Alonzo did not.
Both said during the GV Wire forum that they would support a Measure P successor in some form.

Through Monday, more than 70,000 Fresno County voters returned mail-in ballots. That is approximately 15% of the total 471,384 registered voters in the county, based on the most recent numbers from Feb. 18.
Elections Clerk Brandi Orth could not break down how many of those votes came from District 4. The district, covering east Central Fresno, has approximately 35,000 registered voters.