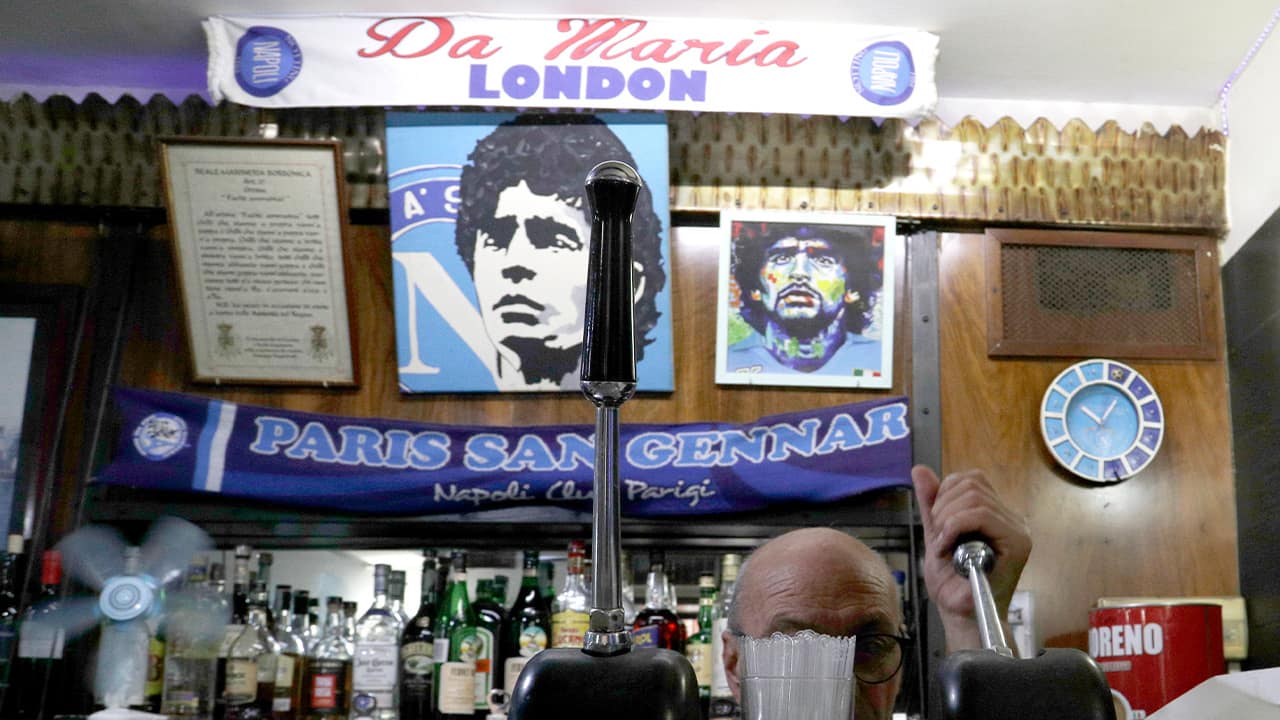 NAPLES, Italy — When Lionel Messi climbs up the steps from the moat surrounding the field at the San Paolo Stadium on Tuesday and emerges into the Champions League spotlight, he’ll be stepping onto sacred ground. Stickers of soccer legend and former Napoli player Diego Armando Maradona are on sale, in downtown Naples, Italy, Wednesday, Sept. 18, 2019. Maradona achieved some of his most memorable exploits and in Naples is still revered with god-like status.(AP Photo/Gregorio Borgia)

Carmine Got the Idea of Creating a Shrine to Maradona

Napoli had never won anything significant before Maradona’s arrival, and he was treated as a savior by a city lacking in basic social services.
“We saw with our own eyes the miracles that he created,” Carmine said. “Other miracles are just stories.”
Carmine got the idea of creating a shrine to Maradona from the vast array of small altars lining the dark alleyways of Naples — the candles of which used to help people find their way before the advent of electrical lighting.
Carmine wasn’t the only Napoli fan inspired to express his devotion to Maradona by religious rites. A short walk from Bar Nilo lies Via San Gregorio Armeno, a narrow road lined with shops selling handmade figures for nativity scenes. Alongside baby Jesus, Mary and Joseph are figurines of Maradona and current Napoli standout Dries Mertens.
“One of the first figurines we made was of Diego Armando Maradona and you can imagine how many we sold. Still today, it sells a lot,” said craftsman Marco Ferrigno, who runs the most prominent shop on the street.
“Diego left an indelible mark on the history of this city — in terms of both soccer and beyond soccer. He was someone ‘sui generis,’” Ferrigno added, using the Latin term for someone in a class by himself. “We’re still talking about him 30 years later.”
While he doesn’t like to admit it, the player whose figurine Ferrigno sells the most these days is that of Cristiano Ronaldo.
“There are a lot of Juventus fans around here,” Ferrigno said. “They live in hiding.”

Among current Napoli players, the best seller is Mertens, the crafty Belgium forward known locally as “Ciro” — the most popular of Neopolitan names. A placard reading Maradona and his nephew is displayed in a shop with the statuettes of soccer legend and former Napoli player Diego Armando Maradona together with nativity scenes ones in Via San Gregorio Armeno, in downtown Naples, Italy, Wednesday, Sept. 18, 2019. Alongside baby Jesus, Mary and Joseph are figurines of Maradona and Dries Mertens. (AP Photo/Gregorio Borgia)

Each year during preseason training in the northern region of Trentino, Cardinal Crescenzio Sepe, the archbishop of Naples, visits to bless the club with a Mass held on the practice field. The Mass concludes with other priests going up into the stands amid the fans to hand out Communion — thus converting the entire stadium into a church.
Asked in 2018 about Ronaldo’s arrival at Juventus, Sepe responded with a reference to the Portugal standout’s first name.
“(Juventus) can take all the Christians they want, but we’re the real Catholics,” Sepe said before putting on a personalized Napoli jersey over his clerical collar.
The catholic influence on Napoli is also evidenced inside the Stadio San Paolo — named for St. Paul according to the legend that the apostle docked in the Fuorigrotta area surrounding the stadium when he reached current-day Italy.
Lining the wall near the old entrance to the field are a series of devotional cards featuring images of catholic saints and Madonnas.
Before he climbed the steps and emerged before the crowd, Maradona used to pray to the Madonna di Pompei and kiss the prayer card.
While the entrance with the saints and Madonnas is no longer in use — the players now emerge at midfield instead of under the curva B (northern end) like when Maradona played — Messi might want to make a special stop there.
“We have a saying here, ‘Abbi fortuna e dormi’ (Those that have luck can sleep calmly at night),” Ferrigno said. “So luck is fundamental.”

Blackwell Is on the Mark in Victory Over Air Force