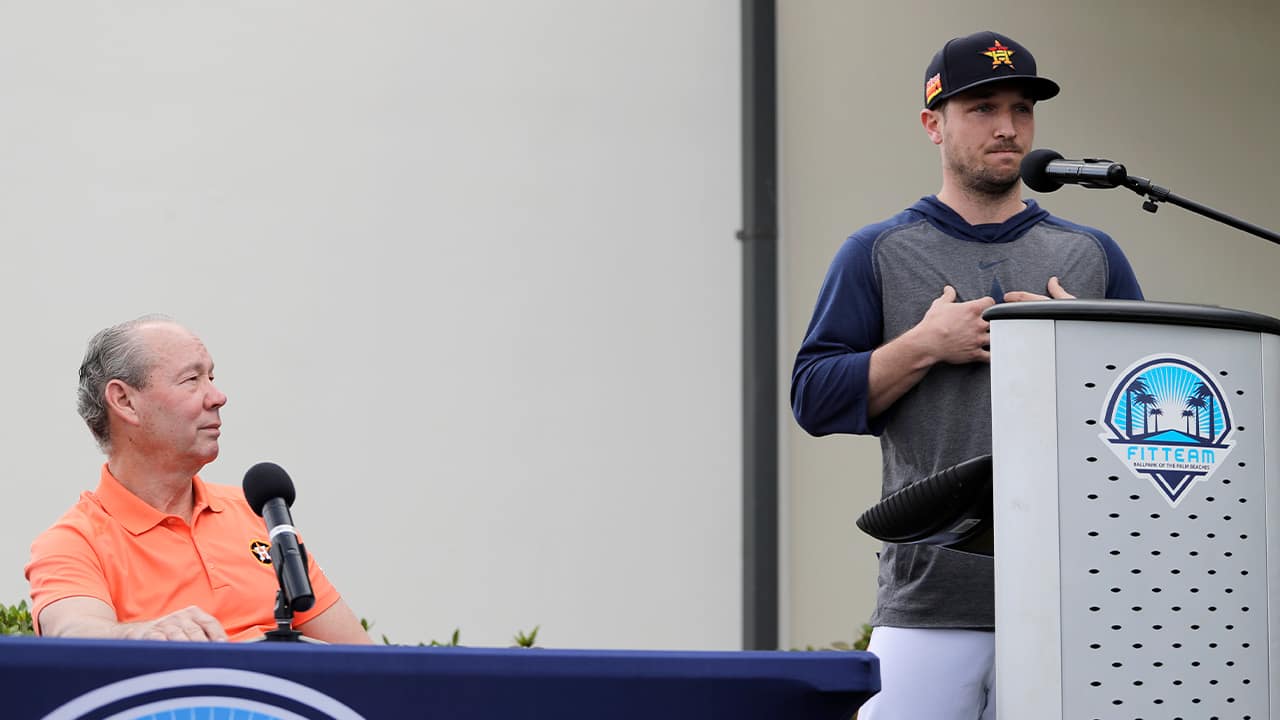 Baseball Commissioner Rob Manfred disciplined the Astros after he found the team broke rules by using electronics to steal signs during 2017 and 2018. The investigation found the Astros used the video feed from a center field camera to view and decode opposing catchers’ signs. Players banged on a trash can to signal to batters what was coming, believing it would improve chances of getting a hit.
Manager AJ Hinch and GM Jeff Luhnow were given one-year suspensions by Manfred; Crane then quickly fired both. MLB did not punish any players for the cheating and Crane said he stood by that.
“We’re not going to do anything to the players,” he said.
Crane and players denied that Astros hitters used buzzers to get information about pitches.
The owner repeatedly pointed to MLB’s report instead of directly answering questions and vowed: “This will never happen again on my watch.”
A day earlier, the Astros gathered at their facility, barring media from the grounds, and it was apparent that they mostly agreed on a unified message.
The talking points became clear Thursday before the first official workout of the spring as, one by one, the faces of the franchise spoke to the media in the clubhouse: Bregman, second baseman José Altuve, shortstop Carlos Correa, outfielder Josh Reddick, pitchers Justin Verlander and Lance McCullers. Houston Astros pitcher Justin Verlander crosses his arms as he stands with his teammates at the start of their first spring training baseball workout of the season Thursday, Feb. 13, 2020, in West Palm Beach, Fla. (AP Photo/Jeff Roberson)

The Astros share a Florida complex with the team they lost to in last year’s World Series, the Washington Nationals, and this time, it was the runners-up that drew a lot more attention than the champs as both teams’ camps opened.

The Most Forthcoming and Sincere-Sounding Statements Came From Correa

“I don’t think we feel the need to reach out to those guys,” Reddick said, “or anybody for that matter.”
When asked, inevitably, whether their 2017 title was tainted, they tended to use a variation of, “People have their own opinions,” as Correa did.
Much like Crane and Hinch’s replacement as manager, Dusty Baker, insisted earlier Thursday, the players kept — more hopefully, perhaps, than realistically — insisting they were going to talk about this for one day and then focus on the new season to come.
The most forthcoming and sincere-sounding statements came from Correa, who said the system was not as effective in the postseason because opposing catchers were using multiple signs to tell their pitchers what to throw.

“We feel bad and we don’t want to be remembered as the team that cheated to get a championship,” Correa said.
Unlike some of the rhetoric being offered all around him, Correa used the most basic language to deliver an apology that actually sounded very much like an apology and express remorse that actually sounded rather remorseful.
“What we did in ’17 was wrong. … It’s not how we want to be remembered,” Correa said. “I’m going to be honest with you: When we first started doing it, it almost felt like it was an advantage. … But it was definitely wrong. It was definitely wrong and we should have stopped it at the time.”

Bieber Says Fear Led Him to Stay Away From Music