DAMASCUS — A Syrian was killed and another was wounded when government supporters attacked American troops and tried to block their way as their convoy drove through an army checkpoint in northeastern Syria, prompting a rare clash, state media and activists reported.

“In self-defense, coalition troops returned fire. The situation was de-escalated and is under investigation.” — a U.S. military spokesman

The state-run media said the killed man was a civilian. He was among residents of a village east of the town of Qamishli who had gathered at an army checkpoint. Russian, Syrian and others gather next to an American military convoy stuck in the village of Khirbet Ammueckpoint, pelting the U.S. convoy with stones and taking down a U.S. flag from one of the vehicles. At that point, American troops fired with live ammunition and smoke bombs at the residents, the reports said.

A U.S. military spokesman said coalition forces conducting a patrol near Qamishli encountered a checkpoint occupied by pro-Syrian government forces. After coalition troops issued a series of warnings in an attempt to de-escalate the situation, the patrol came under small-arms fire from unknown individuals, coalition spokesman Myles Caggins said.

“In self-defense, coalition troops returned fire. The situation was de-escalated and is under investigation,” he added in a statement.

Air Force Lt. Col. Carla Gleason, traveling with the U.S. defense secretary in Brussels, said no Americans were killed in the incident.

Hundreds of U.S. troops are stationed in northeastern Syria, working with their local partners from the Kurdish-led Syrian Democratic Forces to fight against the Islamic State group. The U.S. carries out patrols in northeastern Syria, but it was not immediately clear why the convoy drove into a government-controlled area.

The incident marks a rare confrontation involving U.S. and Syrian troops in the crowded region where Russian forces are also deployed — and is certain to further escalate tensions. 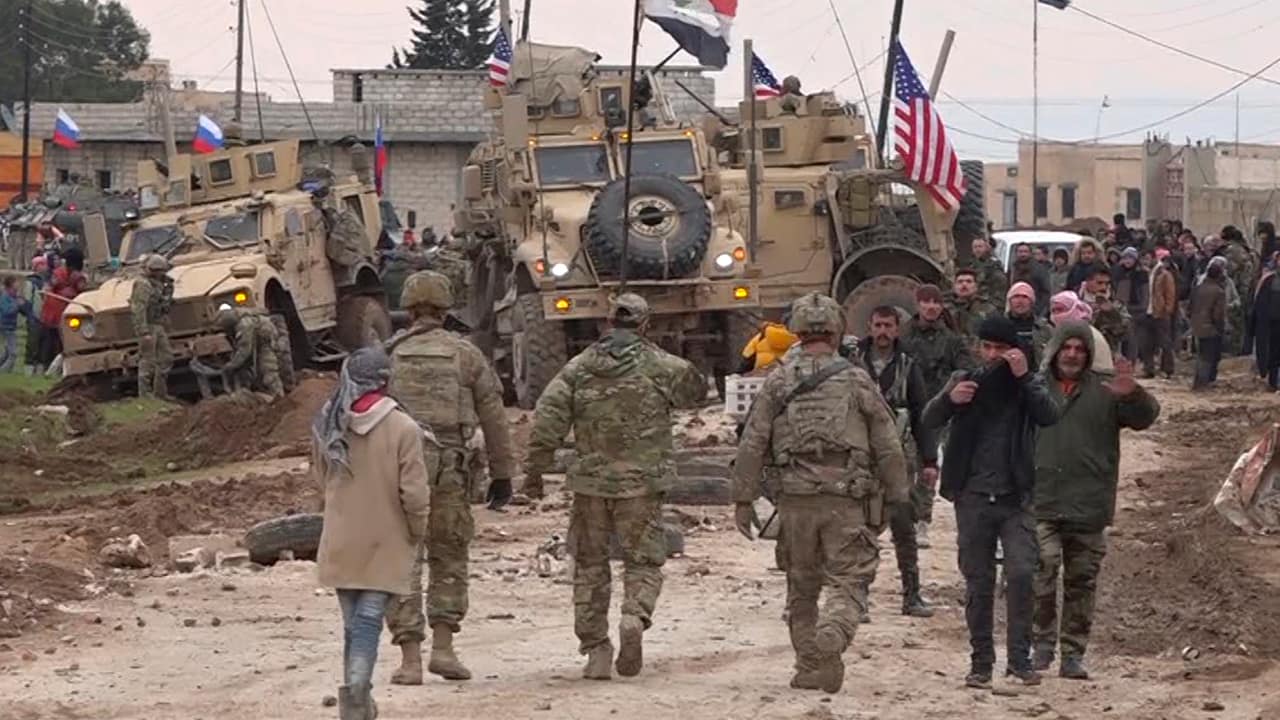 In this frame grab from video, Russian, Syrian and others gather next to an American military convoy stuck in the village of Khirbet Ammu, east of Qamishli city, Syria, Wednesday, Feb. 12, 2020. Syrian media and activists say a Syrian was killed and another wounded in a rare clash between American troops and a group of government supporters in northeast Syria. (AP Photo)

The TV Said Protests Spread, Preventing Reinforcements From Coming to Help the US Convoy

State-run Al-Ikhbariya TV aired a cellphone video showing an armored vehicle flying a U.S. flag standing on a rural road while a car appeared to be blocking its way.

Locals are seen walking past the U.S. armored vehicle, with at least two soldiers inside, one of whom steps down as civilians approach. One civilian is seen tearing a U.S. flag as he approaches the soldier.

The TV said protests spread, preventing reinforcements from coming to help the U.S. convoy. The report said the wounded civilian and was being treated at the Qamishli hospital.

The Syrian Observatory for Human Rights said residents and armed pro-government militiamen in Khirbet Ammu blocked the path of a U.S. convoy. The militia fired in the air, prompting the American troops to fire smoke bombs. Tension escalated and U.S. troops killed one person, the Observatory said.

The Observatory, which has a network of activists on the ground, said it is not clear if the killed was a civilian or a militia member. The Observatory also said that a Russian convoy arrived on the scene to defuse the tension.

The Syrian war, now in its ninth year, has pulled in international players including the U.S., Russia and Turkey. Russia has supported President Bashar Assad’s government, while Turkey is the rebels’ main backer.

Turkish President Recep Tayyip Erdogan said Wednesday that Turkey will attack Syrian government forces anywhere in Syria if another Turkish soldier is hurt. He added that Turkey is determined to force the Syrian military back from the gains it has made in the northwestern province of Idlib by the end of February. 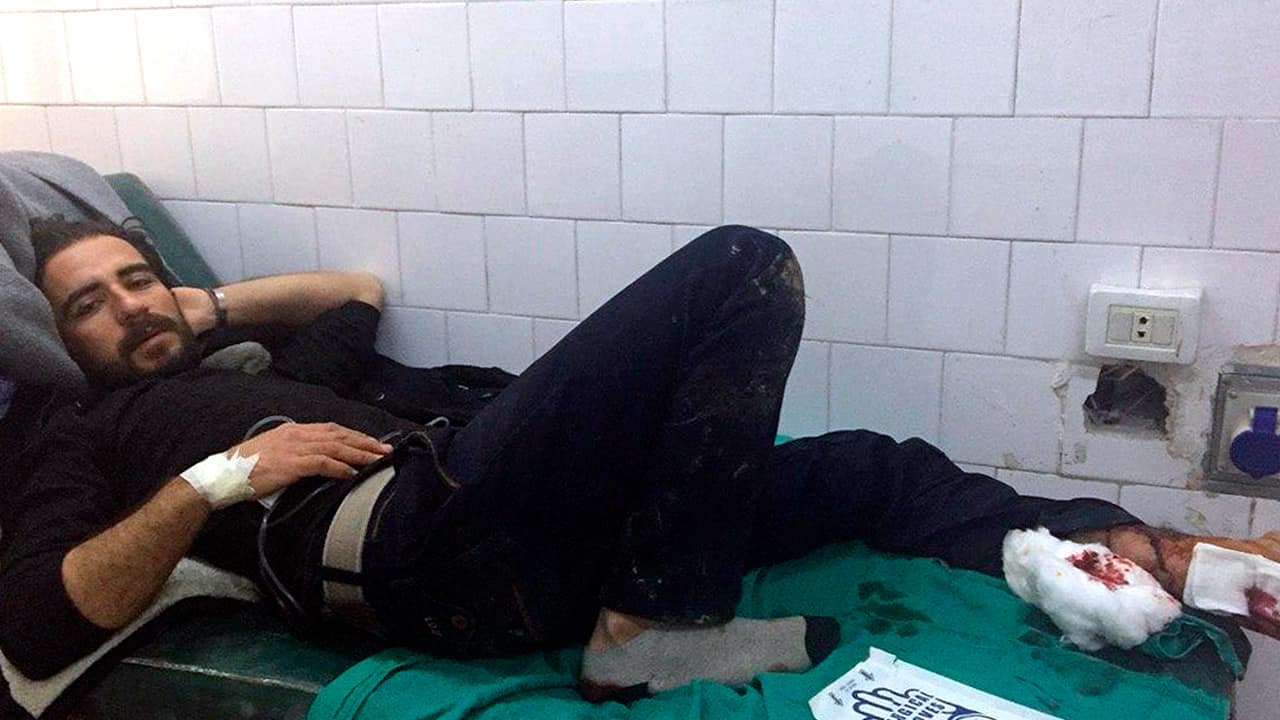 In this photo released by the Syrian official news agency SANA, A Syrian man receives treatment after U.S. troops opened fire on locals who tried to block a U.S. convoy driving near the village Khirbet Ammu, east of Qamishli city, Syria, Wednesday, Feb. 12, 2020. SANA said the locals had gathered at an army checkpoint, pelting the U.S. convoy with stones and taking down a U.S. flag flying on a vehicle when troops fired with live ammunition and smoke bombs. (SANA via AP)

“As of today, in the event of any minor harm to our soldiers, I announce that we will strike regime forces everywhere without being bound to Idlib or the boundaries of the Sochi agreement,” Erdogan told a ruling party meeting in Ankara.

“As of today, in the event of any minor harm to our soldiers, I announce that we will strike regime forces everywhere without being bound to Idlib or the boundaries of the Sochi agreement.” — Turkish President Recep Tayyip Erdogan

Forces loyal to Assad, backed by Russian air cover, have been advancing into the last rebel-held areas of Idlib and nearby Aleppo countryside, seizing dozens of towns and sparking a large-scale humanitarian crisis.

Under a 2018 agreement with Russia in the Black Sea resort of Sochi, Turkey established a dozen military observation posts in Idlib, where it backs some opposition groups. Several of these posts have been surrounded by government forces in recent weeks.

At least 13 Turkish soldiers have been killed by Syrian artillery fire this month.

Erdogan said he had spoken to Russian President Vladimir Putin by telephone about the situation in Idlib.

The Kremlin said that the phone conversation underlined the need to fully implement the Russian-Turkish agreements.

Putin’s spokesman Dmitry Peskov added that despite a pledge by Turkey, militants in Idlib have continued to launch attacks on Syrian troops and threaten Russian facilities in Syria. “It’s inadmissible and it runs contrary to the Sochi agreements,” Peskov said in a conference call with reporters.