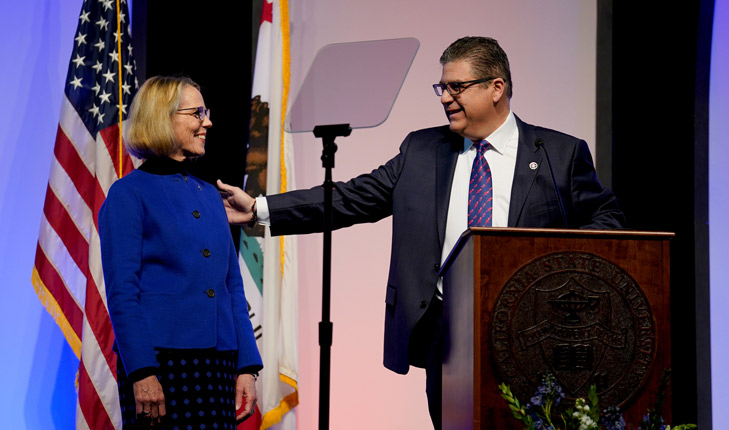 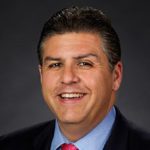 Fresno State President Joseph I. Castro may have saved the best until last in his speech at the State of the University breakfast Tuesday morning: He announced a $1 million donation from former Treasury Secretary and Fresno State alum Paul O’Neill.
But it wasn’t the only surprise at the fifth annual breakfast attended by 750 community leaders and university stakeholders who sat at red linen-covered tables that crowded the floor of the Save Mart Center.
Castro invited Guarantee Real Estate founder Joan Eaton onstage to represent her mother, retired pediatrician Virginia Eaton, who last week was presented the 2020 President’s Medal of Distinction at the Terraces of San Joaquin Gardens for her support of education, leadership, and years of serving generations of Valley children.

“Giving back is in Joan’s nature. It was modeled by her parents, and you have discovered your own gracious way of doing the same.” — President Joseph I. Castro to Joan Eaton
He noted that Virginia Eaton and her late husband, Lewis Eaton, have funded two scholarships at Fresno State, one for a business student and the other for a pre-med student.

Castro thanked Joan Eaton, a lecturer at the Craig School of Business, for her many contributions to the university and its students, and for serving on the Fresno State Foundation Board of Governors.
“Giving back is in Joan’s nature. It was modeled by her parents, and you have discovered your own gracious way of doing the same,” he said.
And then came the surprise. Castro added in an excited voice, “Friends, please stand and join me in honoring Joan Eaton with the 2020 President’s Medal of Distinction!”


“How can you partner with us to prepare students so they will later meet the needs of your organization upon graduation?” — President Joseph I. Castro
The medal, established in 1993, is the highest non-degree award presented by Fresno State and goes to those who have made significant contributions to the Valley, state, or nation. Past recipients include Ruiz Foods founder Fred Ruiz, Judge Armando Rodriguez, Justice Marvin Baxter, and state lawmaker Kenneth L. Maddy. 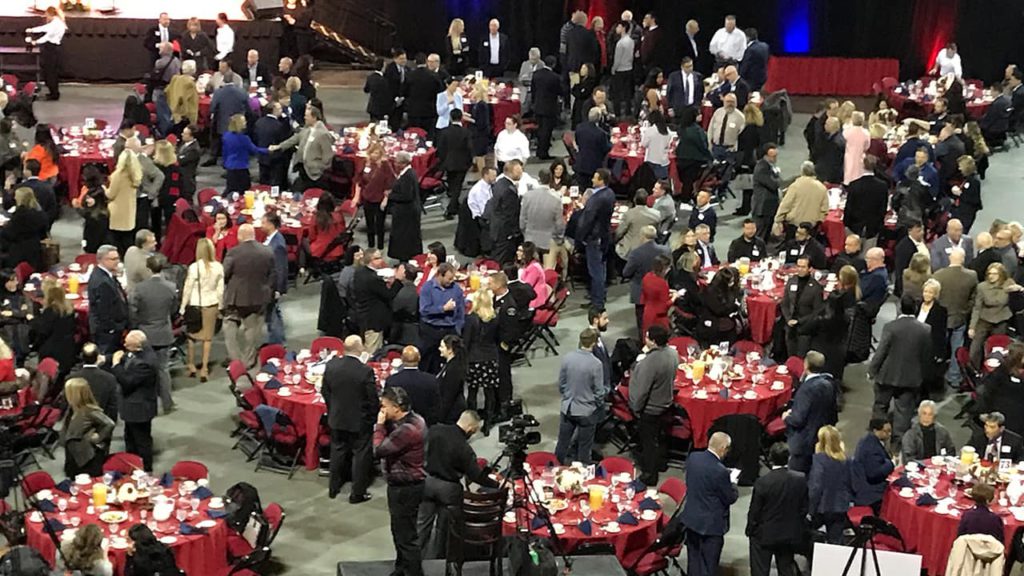 About 750 community leaders and Fresno State stakeholders were on hand Tuesday for the fifth annual State of the University breakfast at the Save Mart Center. (GV Wire/Nancy Price)

State of the University Remains Strong

Fresno State continues to be an economic engine for the Valley, and Castro said that engine is being pushed into higher gear with a newfound focus of state officials and initiatives.
He urged business leaders at the breakfast to consider expanding internship opportunities for Fresno State students, and help create the type of workforce that will propel the Valley’s economy.
“Considering that more than 80% of Fresno State graduates remain in the region — and for many of our majors, it’s even higher — what paid internships or other hands-on experience can you provide while they are students, so that your organization can simultaneously lift up and benefit from these capable students?” he asked.
“How can you partner with us to prepare students so they will later meet the needs of your organization upon graduation? I ask you to consider this today and in the coming days.”

Many Fresno State graduates will be needed in fields where there are more jobs than workers, such as education and health care, Castro said.
The Fresno State Visalia Campus, located on the College of the Sequoias campus, will unveil this fall a  nursing program in collaboration with COS, Porterville College, and West Hills College Lemoore, he said. About 20 students are expected to register for the South Valley RN to BSN program, he said.
Fresno State is doing much, but could do more, Castro said. The university was unable to admit thousands of CSU-eligible students last year because there was not enough state funding.
“I ask you to join us in advocating for additional state support so that more Valley students, who have worked so hard to earn the opportunity to obtain a Fresno State education, are given that opportunity, and they will, in turn, benefit all of us and help elevate the Central Valley,” he said.

He Takes Cymbals to Next Level

One man who has elevated the Valley in his own way was on hand for the breakfast. Fresno State student Travis Morris’s enthusiasm for the university and the Valley — and his high-energy playing of the cymbals — went viral on social media and eventually caught the attention of talk show host Ellen DeGeneres. She recently gave Morris a Jeep after learning that his bike was sidelined when someone slashed its tires.

Morris “crashed” his cymbals in a performance with the Bulldog Beat to kick off the breakfast.