Westminster and Work: Some Show Dogs Serve, Search or Soothe 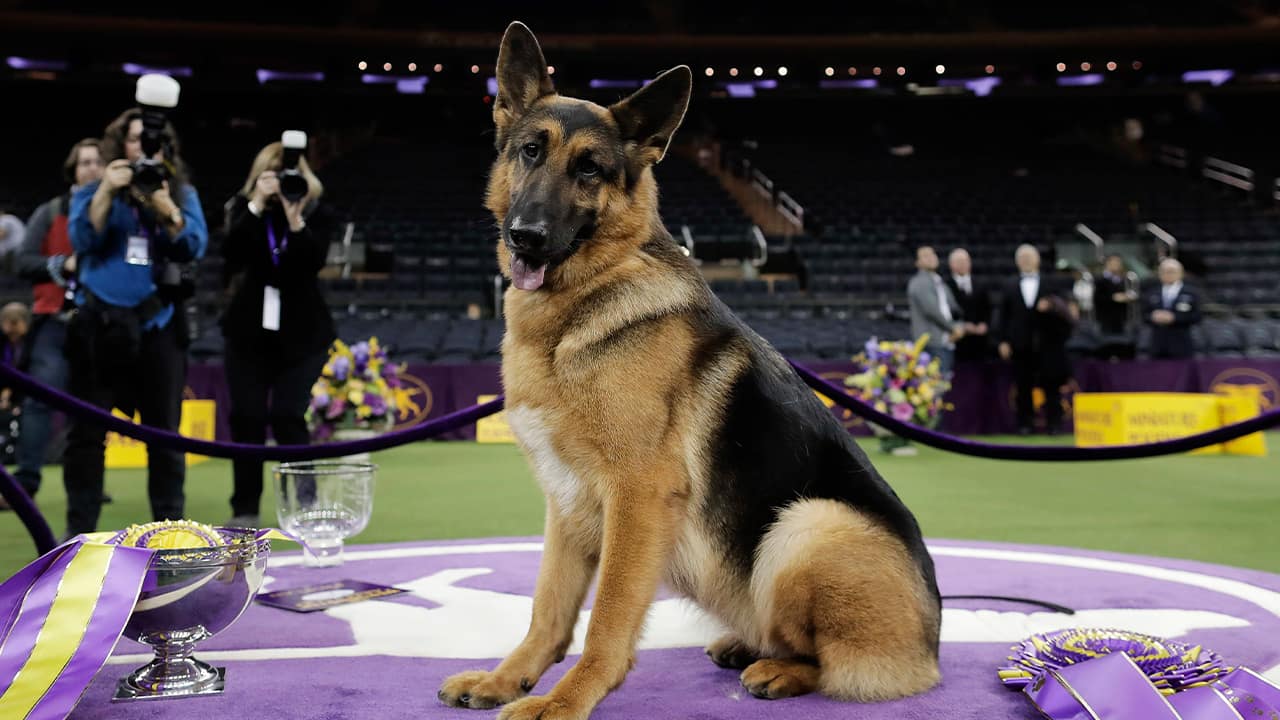 NEW YORK — From the silky strut of Afghan hounds to poodles with coats sculpted like confections, the Westminster Kennel Club’s green carpet spotlights manicured, pedigreed canines vying to be deemed top dog. But they aren’t just for show.

Many Working Dogs Don’t Have a Show Pedigree

Sometimes those connections are family ties.
Rumor, the German shepherd chosen best in show at Westminster in 2017, counts among her puppies two PTSD service dogs that live with veterans. Two more pups are training toward that goal.
“Dogs have always been pretty good to us, so this is the way that we can give back,” says Rumor co-owner and co-breeder Kent Boyles.

Some Organizations Train Shelter Dogs for Service, Search and Other Jobs

Looks don’t matter much, and the dogs have a “go-go-go-go-go-go-go” drive to seek out scents, she says. “They’re not what most would want as your average house pet.”
To golden retriever breeder Theresa Yeager, though, it’s a point of pride to see a litter produce both show and working dogs. Like Rainier, one of the country’s top 20 show goldens, and his siblings that do therapy and search-and-rescue work.
“Ideally, that’s what you want — you want the dog that has the beautiful conformation and also has nice, strong working ability,” says Yeager, a retired teacher in Bryan, Texas. To her, “that’s really the whole point of breeding.”
Rainier’s brother Cooper and Cooper’s owner, Robert Andrews — until recently an Austin, Texas, police officer — trained and searched for missing people with a volunteer organization. Andrews, now working for a state agency, says he was struck by Cooper’s dedication and the connection that grew as they learned “how each other worked and what we could tolerate.” In this June 2015 photo provided by Robert Andrews, his golden retriever, Cooper, wades through muddy water in Austin, Texas. Cooper is a trained search-and-rescue dog, while his brother Rainier is a show champion, a relationship that illustrates ties between show dogs and dogs that do specialized work. (Robert Andrews via AP)

Now, his wife, Patricia, is training Cooper to become a therapy dog for 911 dispatchers.
Work isn’t purely for purebreds. Some organizations train shelter dogs for service, search and other jobs.

“It’s probably not the easiest way to do it, but it’s certainly wonderful to see that dog go from being in a shelter to then deploying and going out and assisting survivors,” says Denise Sanders of the National Disaster Search Dog Foundation. Its canine graduates have responded to earthquakes, hurricanes and other catastrophes around the world.
Lacey the Lab responds to a different kind of crisis. She’s a champion agility dog with “a very serious day job,” says owner, breeder and handler Dr. Colleen Copelan.
The job: soothing and helping draw out troubled young patients in Copelan’s psychiatry office in Camarillo, California.
Lacey and Copelan were scheduled to return to Westminster Saturday but had a last-minute change of plans.
Ghost, the Norwegian buhund, is a Westminster veteran and won his breed at the 2018 National Dog Show. In this Saturday, Jan. 25, 2020 photo, Ghost, a Norwegian buhund, greets visitors at the American Kennel Club’s “Meet the Breeds” event in New York. Ghost is competing at the Westminster Kennel Club dog show, but he’s also a therapy dog that makes weekly rounds to see patients, staffers and visitors at a Delaware hospital, and he visits schools to serve as a nonjudgmental listener for children learning to read. (AP Photo/Jennifer Peltz)

He’s also a winning presence at the Delaware hospital where he sees 100 or more patients, staffers and visitors each Thursday. Wearing a vest that says “please touch me,” he has even climbed onto a bed so a patient could pet him, said owner and co-breeder Patricia Faye Adcox of the town of Wyoming, Delaware.
“They’re not just show dogs,” she says. “At least my guys, they aren’t pampered pooches.”

Related Topics:dogsWestminster Kennel Club
Up Next

More Businesses Reopen in China, but Many People Stay Home