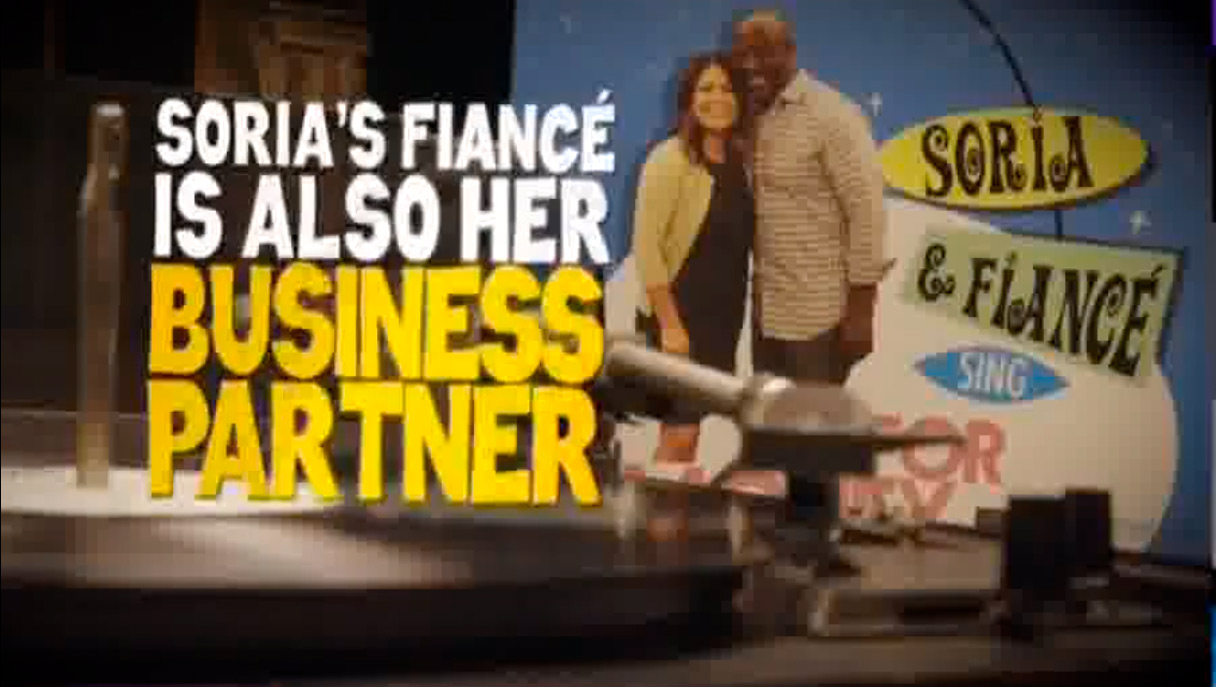 With his latest TV campaign ad, Congressman Jim Costa came out swinging against political rival Esmeralda Soria.
Costa accused her of crying poverty while giving herself a pay raise as a member of the Fresno City Council. And, he took shots at her relationship with fiancé and business developer Terance Frazier.
Costa and Soria are Democrats running in the 16th District, which includes Merced, Madera, and parts of Fresno.
A copy of the TV ad, airing on several Fresno stations, can be found here.
Soria criticized Costa for going negative.
“I am very disappointed that he is using Trump’s playbook,” Soria said. “He resorted to low blows. He should be ashamed of this type of politicking.
“If he really is the right fit for the Valley, he should stick to what he has done. Forty years (of holding elected office) and we’re still the poorest district in the state.”

“I am very disappointed that he is using Trump’s playbook.” — Congressional candidate Esmeralda Soria
A look at some of the ad’s claims:
CLAIM: “Esmeralda Soria says she’s living paycheck to paycheck.”
TRUE. In a video interview with The Fresno Bee last July, Soria talks about the financial struggles for those living in the 16th district.
“I’ve been the fortunate one. I’ve been able to buy my own home. But I still struggle. I’m living paycheck to paycheck. And, there’s many families like that,” she said.
On her congressional campaign website, Soria does say, “Too many students are crippled with high debt loads right as they start their careers. And, I understand that struggle because I am still burdened by my student loan debt ten years after graduating.”
Speaking to GV Wire, Soria said her college debt is $150,000, exceeding her monthly mortgage. She also has medical costs from taking care of family members.
“I’m kind of like the average person,” Soria said.
CLAIM: “Soria gets $96,000 a year from taxpayers and pay perks and benefits.”
TRUE. Her base salary as a city councilwoman is $80,000. Transparent California estimated her perks and benefits to be about $16,000.
Also according to Transparent California, Soria earned $13,726 in salary and benefits as an instructor at Fresno City College.
For comparison, as a member of Congress, Costa earns $174,000 in base salary. While that amount can be automatically adjusted using a formula (in place since 1989 before Costa became a congressman), Congress has foregone a raise since 2009.
CLAIM: “Gave herself a 23% raise on the council.”
TRUE. Soria voted on Dec. 13, 2018, to raise council salaries 23%, from $65,000 to $80,000. The raise takes effect when a councilmember begins a new term. For Soria, after winning reelection in 2018, she began collecting a higher salary in 2019.
Pay raises when Costa served as a state Assemblyman were automatically built into the state budget. This process was in effect from when Costa took office in 1978 through 1988, when the compensation law changed.
CLAIM: “Soria’s fiancé and business partner received city contracts worth millions.”
TRUE. Terance Frazier — not mentioned by name in Costa’s ad — and Soria have been dating for several years and got engaged last year.
In her Form 700 covering sources of income for 2018, Soria lists TFS Investments LLC, Frazier’s investment company. The amount, between $1,001 and $10,00 is described as interest from a loan.
“I made a one-time investment, and that is what it was. I was very upfront about it and disclosed it. I invested here locally,” Soria said.
Frazier, and his businesses, have received city contracts. Most notably, Frazier’s nonprofit, the Central Valley Community Sports Foundation, received a 25-year lease to operate Granite Park. That also came with a $150,000 annual subsidy from the city for 10 years.
Frazier also has contracts to develop parts of downtown,
Soria has recused herself from voting on any contracts involving Frazier since the couple began dating.
Costa, in his most recent Congressional financial disclosure form covering 2018, listed two rental homes, between $100,000-$1,000,000 income from his farm, and dozens of financial investments through his 401k account.

Others React to Costa Ad

To no one’s surprise, some of Soria supporters were none too kind to Costa on Twitter after the ad started running.
“Costa decides to go negative, attacking a young qualified woman. We’ve heard this ‘tune’ before. I guess when you have corp PAC $ in the bank, you get to be a bully. But bullies never win,” the California Young Democrats wrote. It should be noted that the group’s president, Clara Varner, also runs Soria’s campaign.

Costa decides to go negative, attacking a young qualified woman. We’ve heard this “tune” before. I guess when you have corp PAC $ in the bank, you get to be a bully. But bullies never win. @RepJimCosta @AOC @RepPressley @katieporteroc @KatieHill4CA @JCisnerosTX @LatinasLeadCA 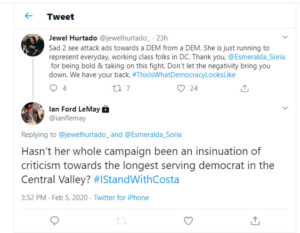 Kingsburg Councilwoman Jewel Hurtado wrote: “Sad 2 see attack ads towards a DEM from a DEM. She is just running to represent everyday, working class folks in DC. Thank you, @Esmeralda_Soria  for being bold & taking on this fight. Don’t let the negativity bring you down. We have your back. ThisIsWhatDemocracyLooksLike.”
To which Ian LeMay, a former Costa staffer and current president of the California Fresh Fruit Association replied, “Hasn’t her whole campaign been an insinuation of criticism towards the longest-serving democrat in the Central Valley? #IStandWithCosta.”

Chinese Doctor Who Sounded the Alarm About the Virus Dies